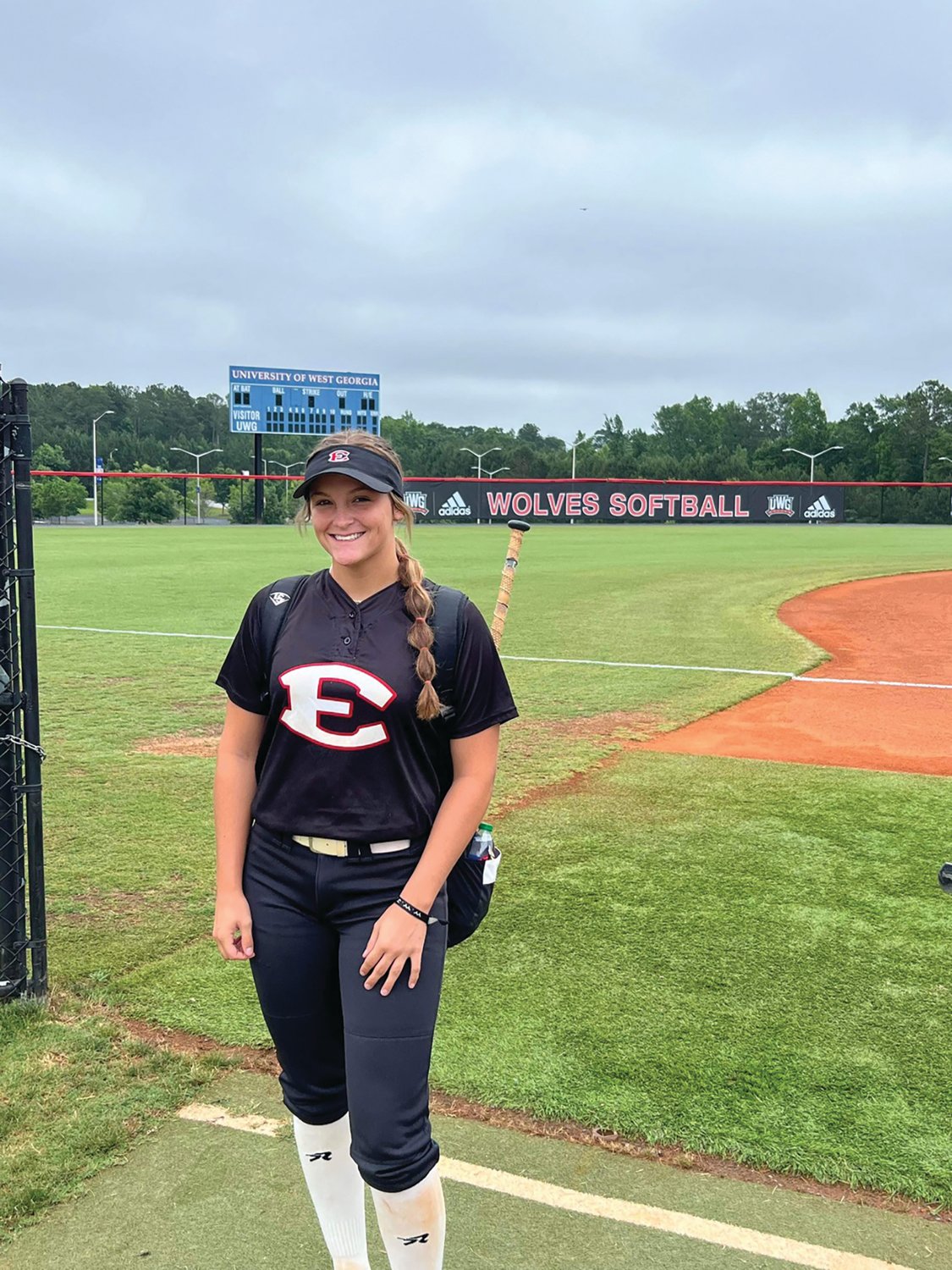 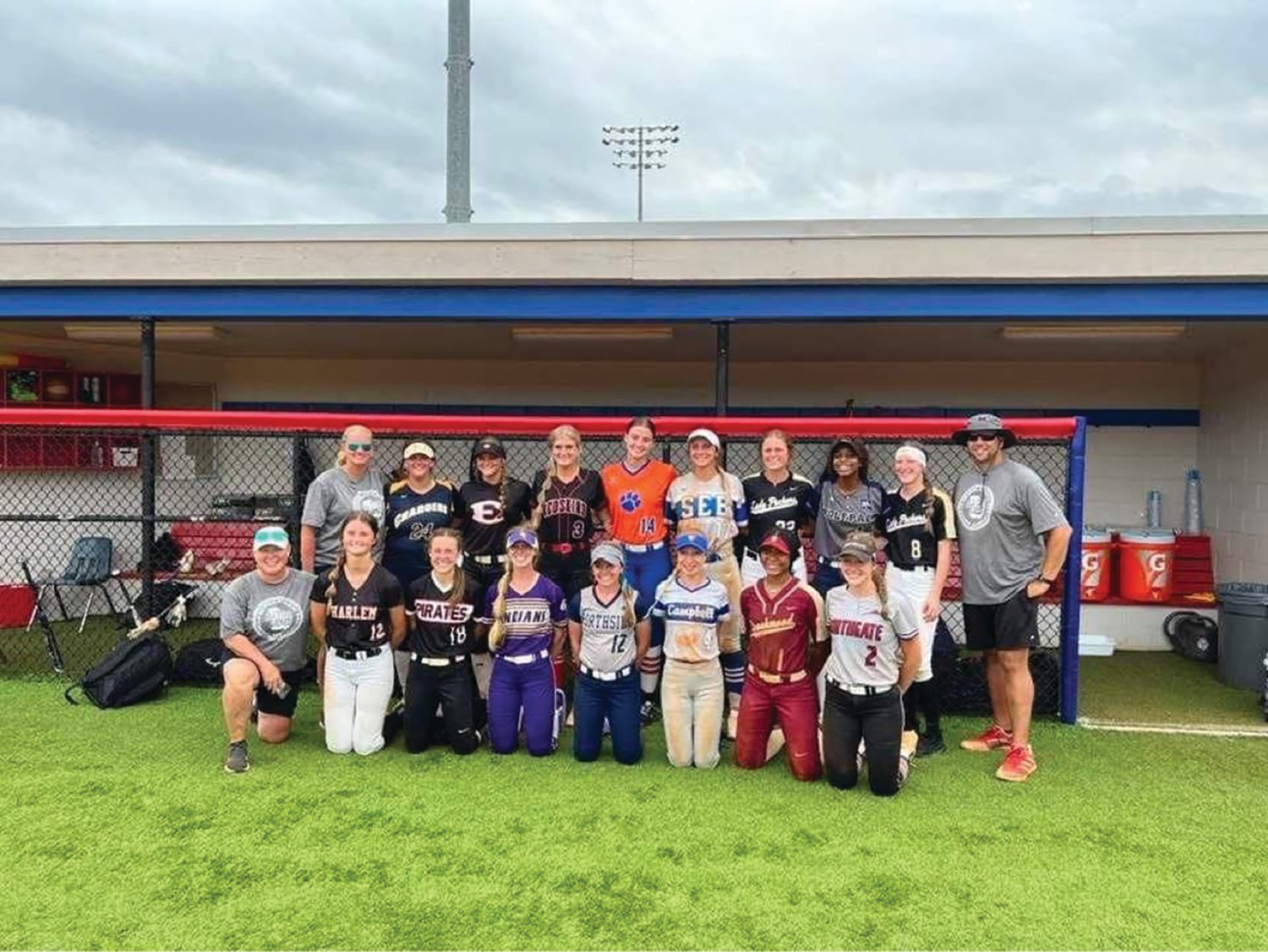 Somewhere behind the athlete, behind the hours of practice, behind the coaches who have pushed them to be the best, there is a little girl who fell in love with the game and never looked back.

For 17-year-old softball star, Charla Clifton, this is absolutely the case.

“Really, I’ve just been practicing and playing since I was young. I started pitching when I was 9 years old, and I’ve pitched every year since then. I always wanted to go to college and pitch and be this big star.” That dream is easily making its way into reality for the up-and-coming senior whenever she's out on the field. Her dedication is a naturally appearing passion for the game, and is evident through every stellar performance that she provides for the ECI Lady Dawgs.

“I played for crossfire and more local teams when I was younger from like 9 to 13, then I began going to Atlanta and playing elite when I was around 14 but recreation ball is when it really started. I was pitching rec ball then I started playing travel ball and it just grew from there.”

The teen’s love for the game began when she was just a child, being introduced to t-ball, then recreation softball and all-stars.

“Since she was 9 years old, she has said that she wanted to play for the University of Georgia. We have pictures of her at 10 and 11 attending the University of Georgia’s Softball Camp where she’s out on the field and even from when she stayed in the dorms one night.” Her father, Mikel reminisced. But Charla says that her adoration for the game was as natural as breathing.

“For me, it just came with the motions of life. It was something that I could never get enough of.”

Her pursuit of happiness was found the moment that a yellow ball met her glove. Whether it was from the smack of her first catch or the first whiff of leather, popcorn, and a fresh cut field.

A town legend was born in that instant and the story will be written in our archives for years to come.

“I was selected to participate in the Georgia Athletic Coaches Association (GACA) North and South All-Star Classic.” She said with a beaming smile when talking about her invitatione to this exclusive event that recognizes the best softball players in the state of Georgia. Something more notable than that alone though, is that Charla is the first ever Lady Dawg to compete in this once in a lifetime competition, chronicling a marvelous moment for Emanuel County Institute and the history within it. “It’s cool but more than that it’s a tremendous honor because there have been so many incredible players who have come through ECI and went on to do amazing things with this sport. So, for me to be the one to get to represent our school for the first time in this way, it’s an absolute honor.”

Charla looked back on the tournament with an unmasked excitement. Adding that the profound experience was “Fun” and that many of the attendees were not strangers but “friends” that she’s made along the way.

“Many of the girls there were some who I’ve played against in travel ball, so it wasn't like they were all strangers. We played a bunch of games. Some of my friends from my travel team were on a team with me so I wasn’t all alone. It was an amazing experience.”

The event took place at the University of West Georgia on Tuesday June 7, in Carrolton and featured the north and south all-star teams from Georgia. In the two games that were played, the North won the first game while the South, Charla’s team, won the last.

“We won the game that I pitched. I honestly didn’t expect to do as well as I did, I didn’t expect to have 6 strikeouts that game, my goal was to just let my defense work behind me, so to have strikeouts and to win was huge! I was extremely happy and honestly surprised at how well I did. We didn’t get a trophy but just to be there was better than having a trophy.”

In this season alone, Charla has earned the title Single A Player of the Year for the State of Georgia as well as the First Team Allstate Pitcher, Team MVP, and First Team All-Region.

When asked how she accomplished this, she said, “Work hard! It may not always be fun but it’s worth it. You just got to work out and try your best, even when you don’t want to.”

She also gives credit to her incredible support system for her success as a player, which includes her devoted coaches and her amazing parents, Mikel Clifton, and Brook Hooks.

“My travel ball coaches, Coach Jack Barfield, Coach Emily “Bird” Herren and Coach Frank Wimberly, have helped me out in more ways than they know. Also, my parents have both been incredibly supportive and amazing throughout this journey. I’m so blessed to have them in my life.”

Charla is number 1 for a reason and while putting in the work to get there, she and her family have made memories that will last a lifetime and they are so proud of her unwavering determination and love for the sport.

“When you think back to the recent game, the Georgia High School Allstar Game, just being chosen to be able to compete at that level and that event was awesome and a true sign of her dedication and work ethics. Not only that, but she went there and excelled. She pitched five innings, held down four hits, and put in six strikeouts against some of the best players in the state of Georgia. Those are memories that you can look back on forever and share for years to come.” Charla’s father, Mikel, expressed in admiration of his daughter’s endless efforts, “She was watching the world series last night and I sent her a text and said, ‘You realize we played a tournament in the stadium of Oklahoma City. The same stadium where they’re playing the World Series at right now, is the same stadium that you were pitching and playing a game at last summer.’ It’s just awesome and surreal to know that she’s been there. She's played in Colorado, California, and Kansas City. So, it’s true when I say that the memories that we’ve made with this sport literally travel across the Country and it’s all because of her dedication to the game, all we did is drive her there.”

Charla plans to either attend Georgia Southern University or the University of Georgia after graduation next year, but when asked where she sees her softball career taking her to next, she answered with a positive affirmation.

“I decided this year that I don’t want to go to college to play ball. I have just played softball for so long that I think it’s time to start something new and I’m excited for that. However, my goal for Senior year is to help my team make it to the State Championship. That’s where I’m headed too next!”

Charla’s mom, Brook, echo’s her sentiment about the persistent support that Charla has always received but emphasizes that her achievements couldn’t have happened without her own tenacity and commitment to reach her goals.

“At the age of eight Charla sat us down and said, ‘I want to play ball.’ I knew then that she would excel in the sport because she had an unyielding drive for it at an early age. Her coaches have all been very good and have really pushed her to be the best that she can be, but ultimately, I just think Charla’s always had the motivation on her own. She is what she is today because she’s wanted it and has put forth all the effort to get herself there. She's always been just a complete natural at it but what makes her great is the fact that she went after it all on her own. She’s a well-rounded person who has a huge heart and is encouraging on and off the field. She’s always there for others and if she can lift someone up, she’s going to do that and whoever she can excel with and push to be better she’s going to be that person for somebody. She’s always had that personality about her, and I just appreciate her for that so much.”

Brook expressed wholeheartedly before continuing. “I know that she’s touched so many other girls' lives already because she’s giving lessons now and a lot of these girls wouldn't go to anyone else because of Charla’s personality and what she brings to the table. We’re just extremely proud of the person that she is on and off the field. We just love her.”

Before the conclusion of her interview, Charla recounted one of her favorite memories from this season which has earned its spot as one that she’ll never forget. “Gordon Lee has always been one of the best teams. Anytime they’d come up in conversation we’re always like, ‘Oh my gosh, they're so good!’ She said as she covered her smile with a gasp. “They beat us every time we’ve ever played them but this year, we went into it with a completely different mindset. It was our first game in Columbus, and we began the first half by losing to Gordon Lee, but we came back and beat them. They had won state for like seven years in a row so we had just beat the state champions and it really changed our mindset that we could do it. We were the underdogs in that situation, and we ended up winning by one run. It was so exciting! I mean it was really so much fun!” She closed with a spark in her eyes and a grateful heart. “We went on to win against Social Circle and we were undefeated in Columbus. We were really ‘riding high’. I have the best teammates in the world. We’ve played rec, all-stars, and travel ball together. I have so many memories because of them and because of this sport. I’ll never forget the days that we’ve earned together out on the field.”

“The hard… is what makes it great.”