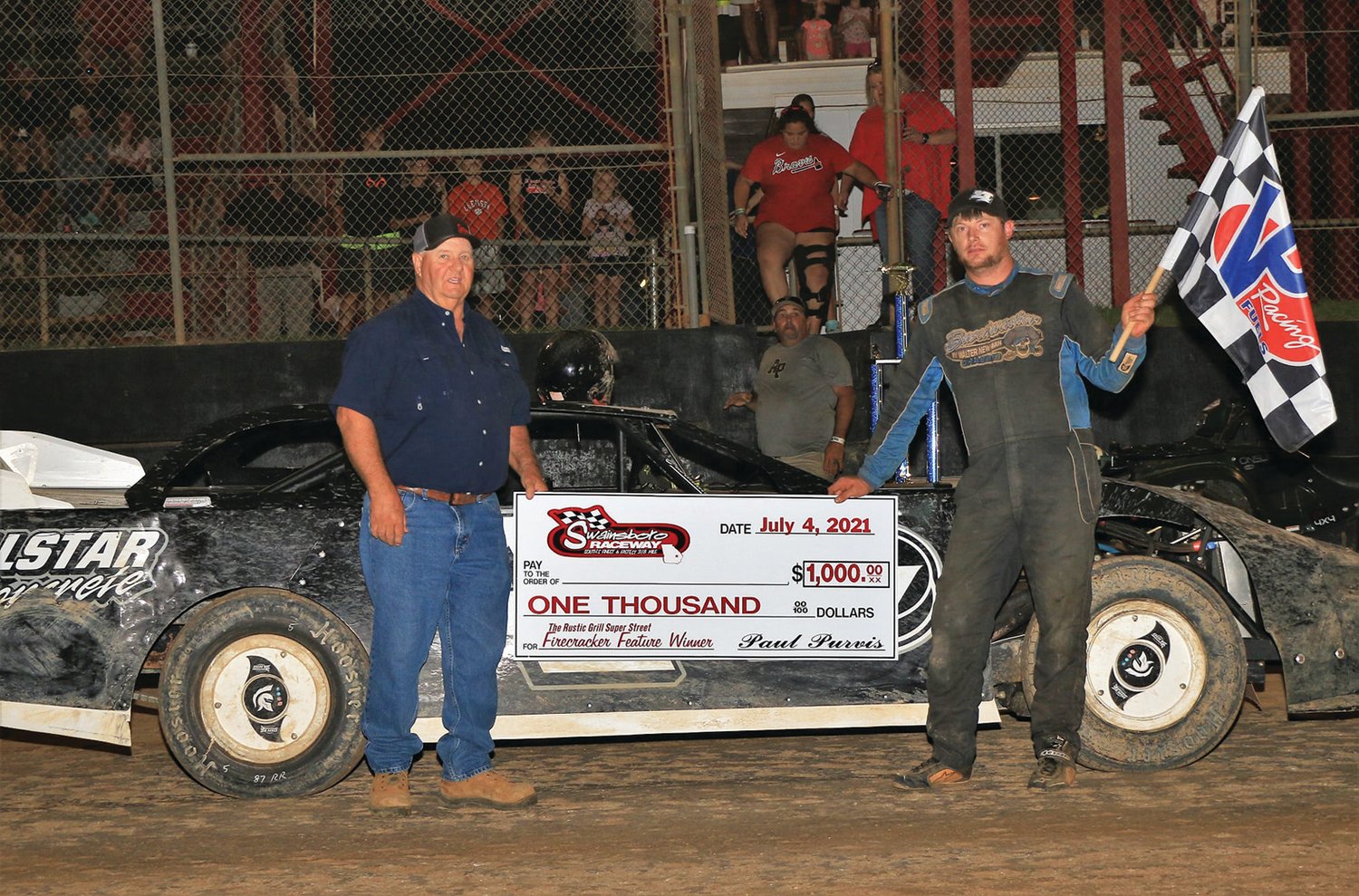 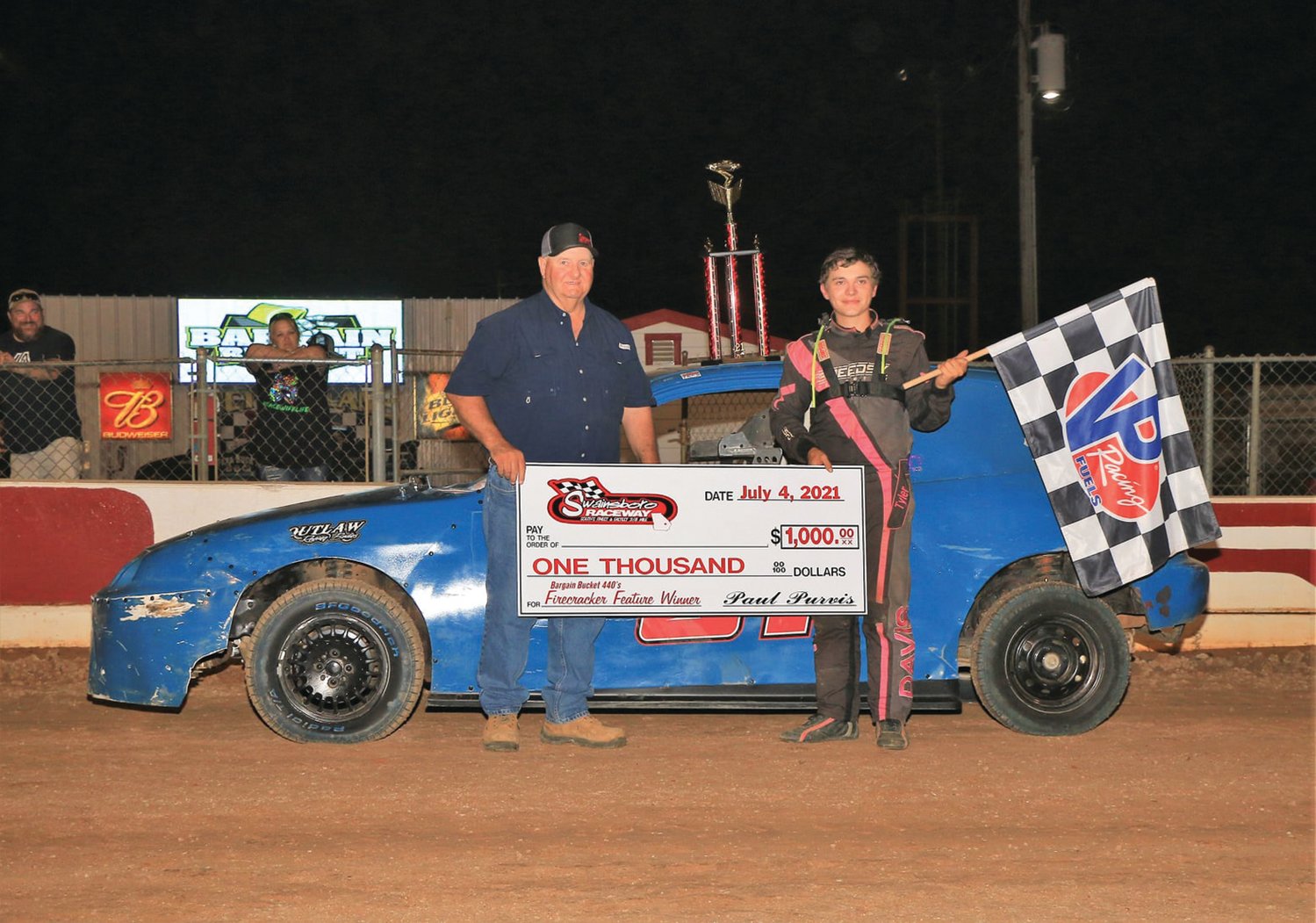 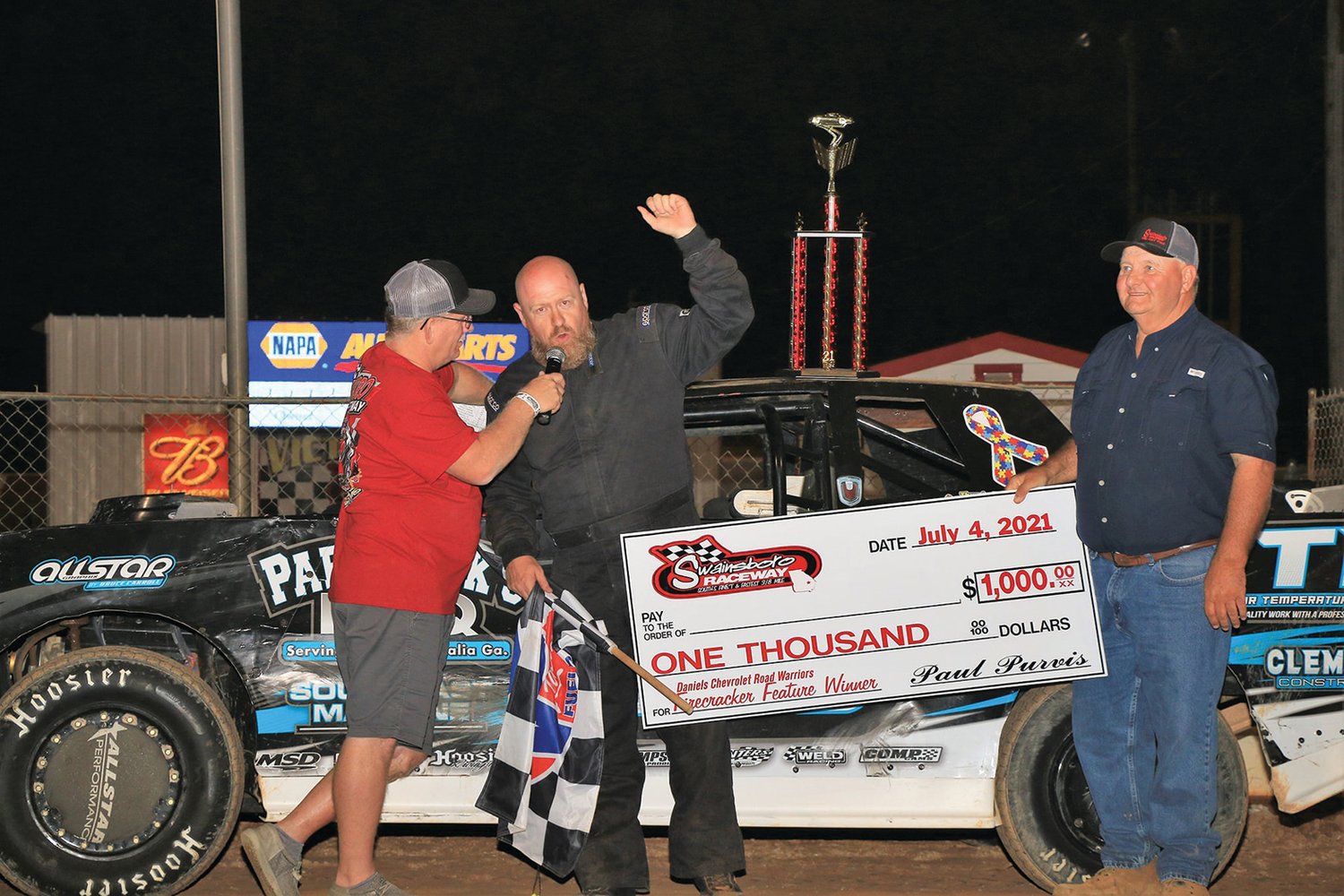 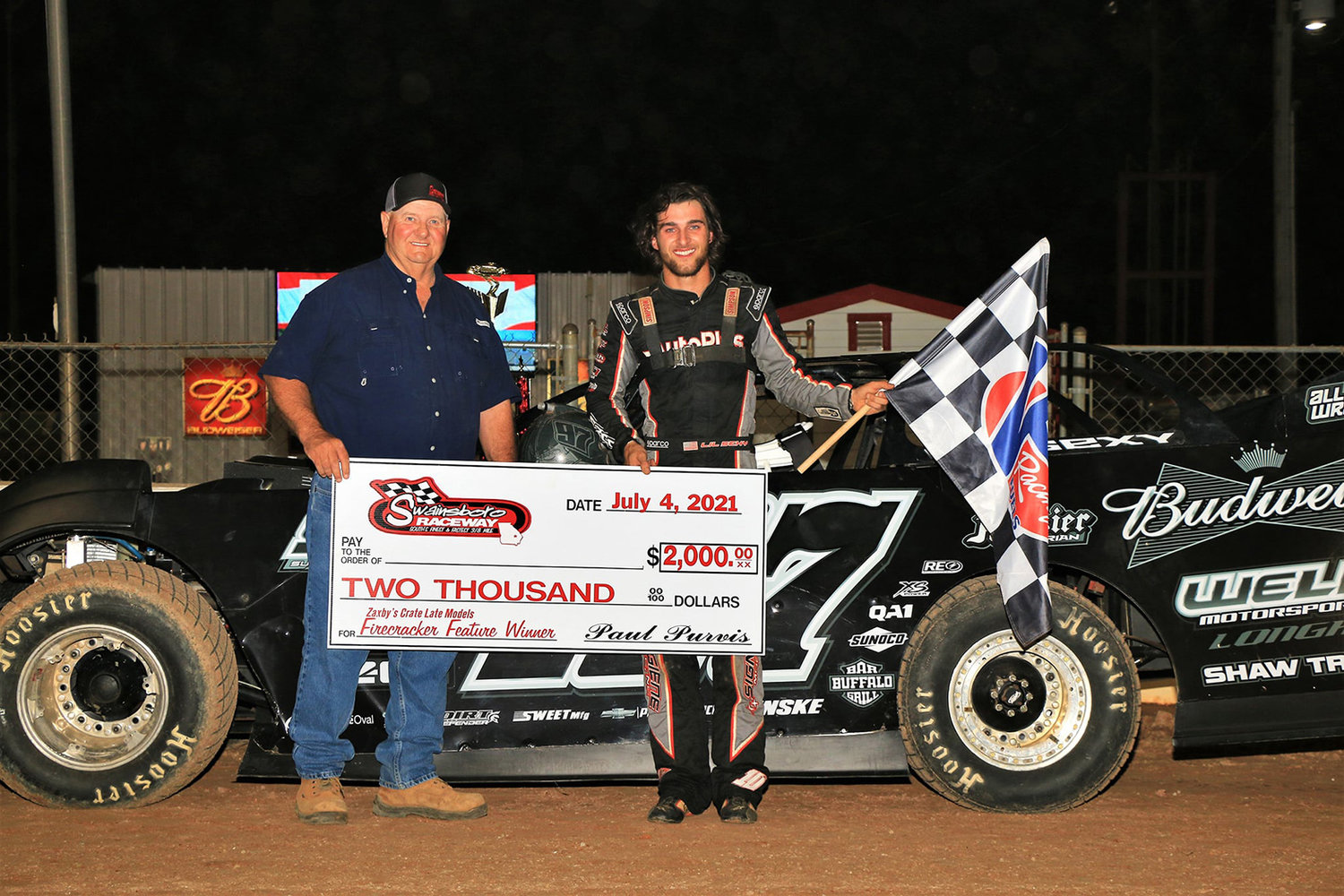 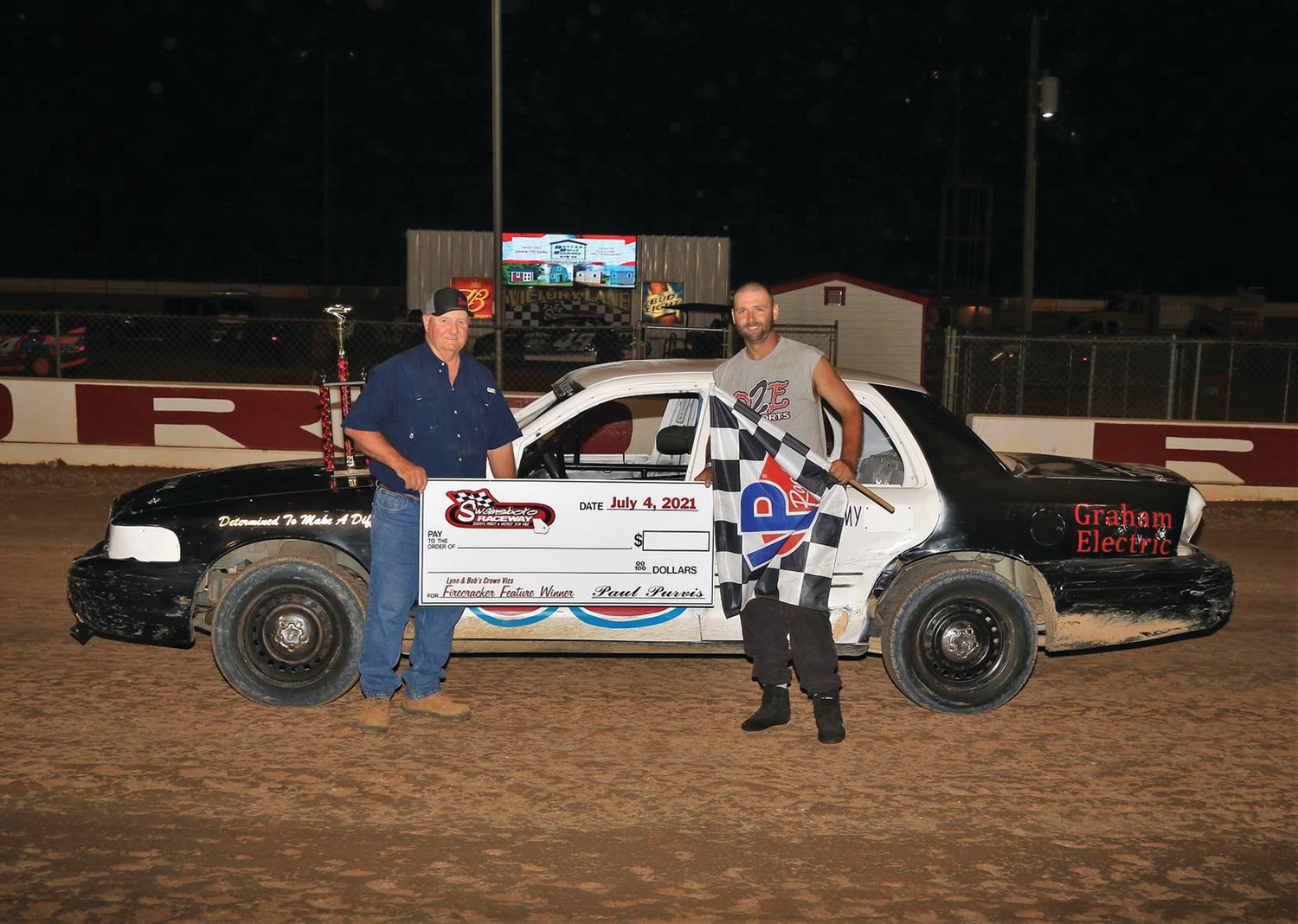 Fans and drivers rolled into Swainsboro Raceway from all over the Southeast Saturday and Sunday to celebrate Independence Day racing Dixie style with the return of the Firecracker 100.  In our world, racing is family maybe not by blood but there's a bond that even through the toughest will not break the big circle that we all share. As I spent the weekend doing what we all love, I witnessed a few things. We came together in prayer for the loss of a fan and those injured at Hartwell Speedway. We ask that you continue to prayer for all those involved from family, to those that witnessed the accident, drivers, track safety members, and track owners/promoters. Locally at our track, we witnessed drivers coming together for a family dear to our heart. With the recent passing of Jr. Safety Member, Turn 4 Angel AJ Mc Cullars, drivers came together and collected over $3,000 between passing the helmet and memorial stickers for AJ's family. Most importantly we ended July 4th with the best Firecracker 100 thanks to the dedication of our drivers and fans!
After heat races on Saturday night, the Rustic Grill Street Stock division kicked off feature events on Saturday night, Brandon Carpenter picked up the heat race win Friday night to lead the field to checkered on Saturday grabbing his first win of the season.  Josh Nelms second, George Williamson third, Michael Smith fourth, making his way from the rear Ricky Strange picked up a top five.
Following gorgeous fireworks display the Zaxby’s Crate Late Model division to the track with Bob Roberson taking the lead.  On the new multiple groove surface, Cody Overton took to the outside quickly setting his path to the front.  Lap 5, Little Sexy, Overton takes over. Ten laps to go, trying for a top three, Henry Carter hits corner wall losing a spot. Cody Overton works through lapped traffic to pick up the win, Bob Roberson grabs second, Jim Rogers third, Hurricane Henry Carter makes a hometown return for fourth, and Joshua Bishop fifth.


In the Daniels Chevrolet Road Warrior division, Robert Fail and Jacob Barwick led the field to green after picking up heat race wins on Saturday night. Fail took the lead leaving Barwick to hold Justin Williams off for the second position. As Fail led the way, lap 4, Barwick, Williams, and Tyler Davis battled 3 wide for second. Lap 6, Tyler Davis moved into the third position. In a battle to the green-white-checkered, Robert Fail picked up his second win with a broken shifter dedicating in memory of legend Tony Purvis, Blue Moon Racing, and his father.  Fail fought to hold off teammate Tyler Davis inching by the second position of Justin Williams in third, Jacob Barwick fourth, and John Bratcher fifth.
Cody Overton set out on a mission to make it a double firecracker pick up the win in the Southland Insurance 602 Crate Late Model division, stepping up a division Dustin Watkins earned second over the Tall Cool One Terry Lumley in third, Richard Johnson fourth, and Brent Herndon fifth.
The blue bullet Tyler Davis quickly took the lead in the Bargain Bucket 440 division as John Hooks fell into second.  Quickly moving through the field the 70 cars Rod Morris and Jordan Fowler passed Daniel Rogers to move into the top five.  Five laps to go, Morris took on teammate Hooks to pass for second.  Unfortunately for Fowler his night ended early with four to go. Tyler Davis picked up the win, Rod Morris second, John Hooks third, Daniel Rogers fourth, and Bradley Bratcher fifth.
Ending the night battling for a shared pay of $1,000 in the Lynn & Bobs Crown Vic class, Christopher Morrow took the lead from Jayme Elliott on lap two.  Coming through the field, from the back Jared Peebles just over halfway had already moved into the top three.  Two to go, Peebles put the pressure on Morrow for the lead. Jared Peebles took the checkered, Christopher Morrow second, Jayme Elliott third, Trey Hobbs fourth, and Garrett Oglesby fifth.

The Tigers kick off the season with a new scoreboard!