Wiregrass Hears the Battle of Cowpens 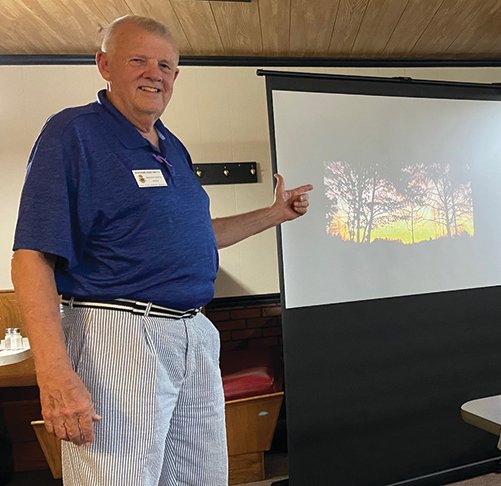 The Wiregrass Chapter Georgia Society Sons of the American Revolution held its monthly meeting Thursday, November 10, 2022, at the New China Restaurant at 6:30 p.m. with President Wilder Smith, Jr. presiding and 14 guests in attendance. The program this evening was presented by Registrar Dess Smith III. His presentation was a short talk and a video on the American Revolutionary War Battle at the "Cowpens" just north of Greenville, South Carolina. The battle took place on January 17, 1781, in the latter part of the Southern Campaign. The Cowpens victory was won over a crack British regular army and brought together strong armies and leaders. The Patriots were under the command of Brigadier General Daniel Morgan, and the British forces were under the command of Lieutenant Colonel Banastre Tarleton. The Patriots numbered between 1,887 to 1,912 and the British were numbered at 1,150 with 2 cannons. The Casualties and losses were for the Patriots at 25 killed and 124 wounded and the British were 110 killed, 229 wounded and 629 captured or missing and 2 cannons lost. President Wilder Smith, Jr. presented a Certificate of Appreciation to Compatriot Steve Burke for his work with all the events that the Wiregrass Group attends during the year. President Wilder Smith, Jr., and Registrar Dess Smith III presented each other with the Samuel Adam's Congress Appreciation Award that was presented to them at this summer's 132nd Congress of the National Society for their help. Also, President Wilder Smith, Jr. presented John Tapley with the Service to Veterans Medal and Certificate in Grateful Recognition of Outstanding Service rendered to the United States Armed Forces Veterans during this past year. John re-organized the "Veterans at the Library" Monday morning coffee and breakfast this past January. It has grown from 6 attendee's to as much as 47 attendees. So far, they have had upwards of 84 different Vets attend the Monday morning breakfast. Compatriot John also organized this years "Wreaths across American" for Emanuel County by setting up 5 cemeteries to place the wreaths on the graves of each veteran. Other organizations have been invited to join with their graves of vets. John said, “This is just the beginning, wait until next year, 2023.”