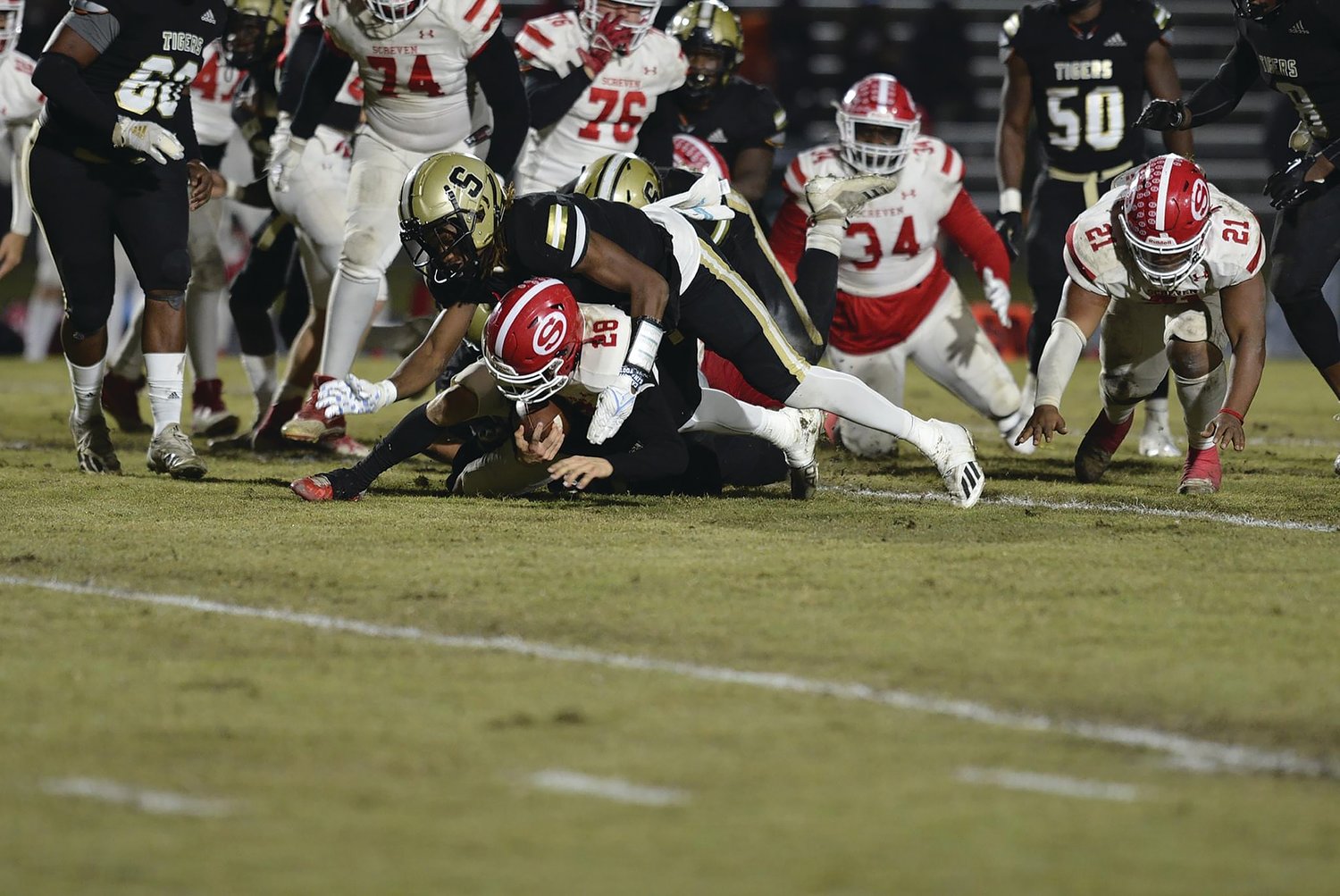 In a typically chilly, late November playoff game Friday night, the Swainsboro Tigers left the offense of the Screven County Gamecocks nearly frozen to take round 3 of the State GHSA playoffs. Up through the half way point of the 2nd quarter, the Tiger offense was at best lukewarm with a 13-7 lead over the Gamecocks. But with a little more than 5 minutes remaining in the 2nd quarter, the Tiger offense slammed it into overdrive scoring 4 times in the last 4 minutes before the half. Demello Jones scored the last 2nd quarter touchdown with less than a minute on the clock to bring the score to 37-7 by the halftime whistle. The Tigers apparently couldn't wait to get back on the field and wanted some more as the 3rd quarter opened up with a 33 yard touchdown sprint from Ty Adams lighting up the scoreboard 44-7. Screven County then returned the Tiger kick to the 31 yard line but stalled out under the pressure of the brickwall defense, and the Gamecocks had to put in a 911 call for a Screven County punt. Bryson Tarver tightened the QuarterBack reins and promptly teamed up with Jordon Williams who exploded down the field in a 63 yard run boosting the Tiger total to an amazing 51 points after Landen Scott tacked on the extra 1. On the next Scott kick, Pollock struggled for the Gamecocks from their own 30 but again it was punter time on 4th down. The next drive for the Tigers culminated in a 52 yard run by Tarver with 49 seconds left in the 3rd. leaving the final tally for the Tigers at 57. Tiger “up and comers” got some valuable playing time in the remainder of Friday night’s contest as Zach Grant and Casey Edenfield clocked field time. Screven County added one more score in the last 12 seconds of the game to bring the total to 57-13 Swainsboro. The stat sheet for this game shows Demello Jones with 95 rushing yards,Ty Adams with 81yards,Jordon Williams with 63 yards, Qin Brown with 36 yards, Bryson Tarver with 81 yards, and Zach Grant with 35 rushing yards. Jakari Nobles was also in the scoring bracket with 46 yards, receiving. Quarterback Ty Adams was on target with completions on 4 out of 5 passes. A total of 540 yards and 6 scoring players tell the story; this Tiger team is balanced and believes in working "for the team".

The championship march of the Swainsboro Tigers will continue this week with more and more State attention being focused on the quality and determination of these young men. Next up, is a matchup with the Rabun County Wildcats, who bested Social Circle 42-0 this past Friday night. Game time is 7:00 pm this Friday night, Tiger Field.