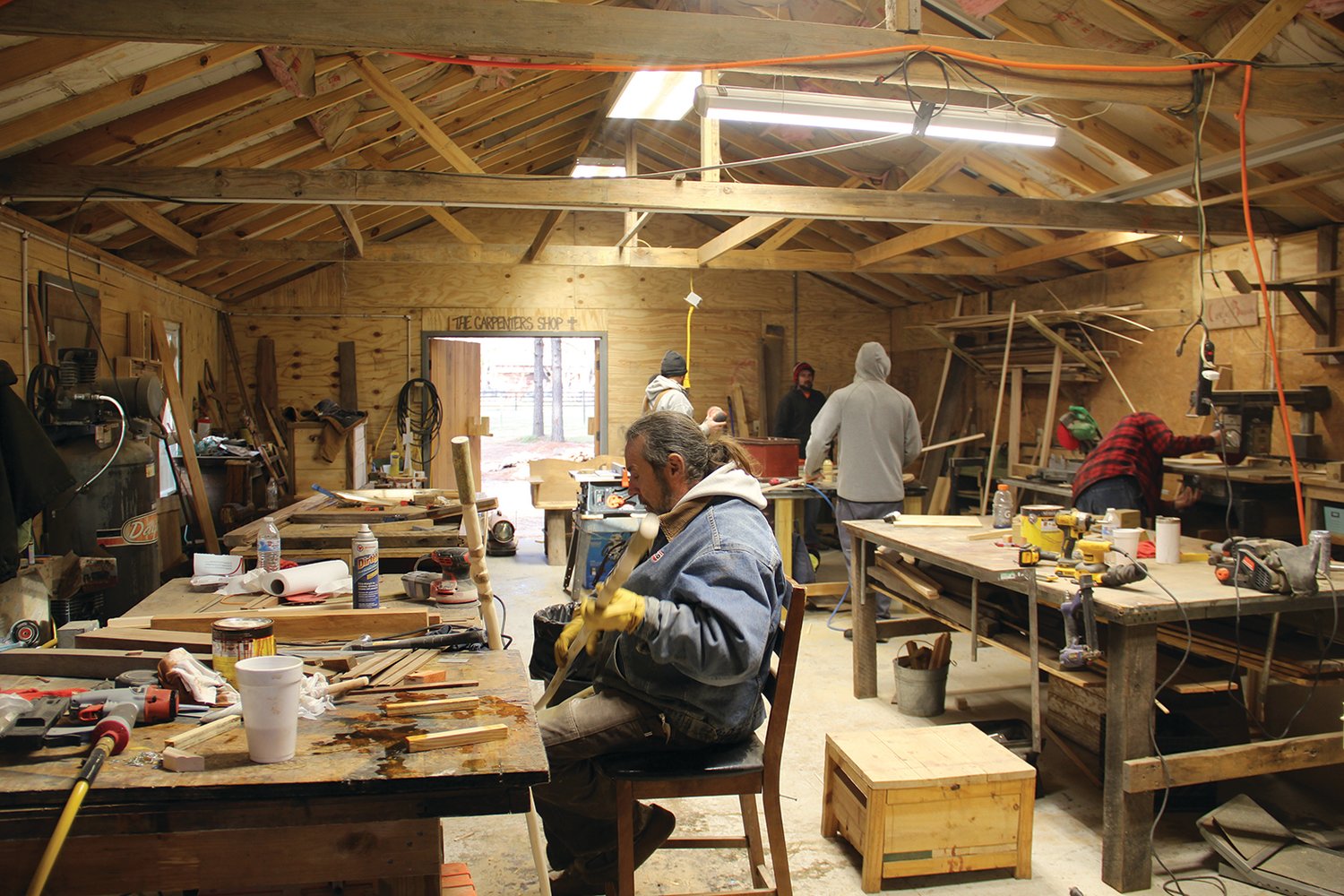 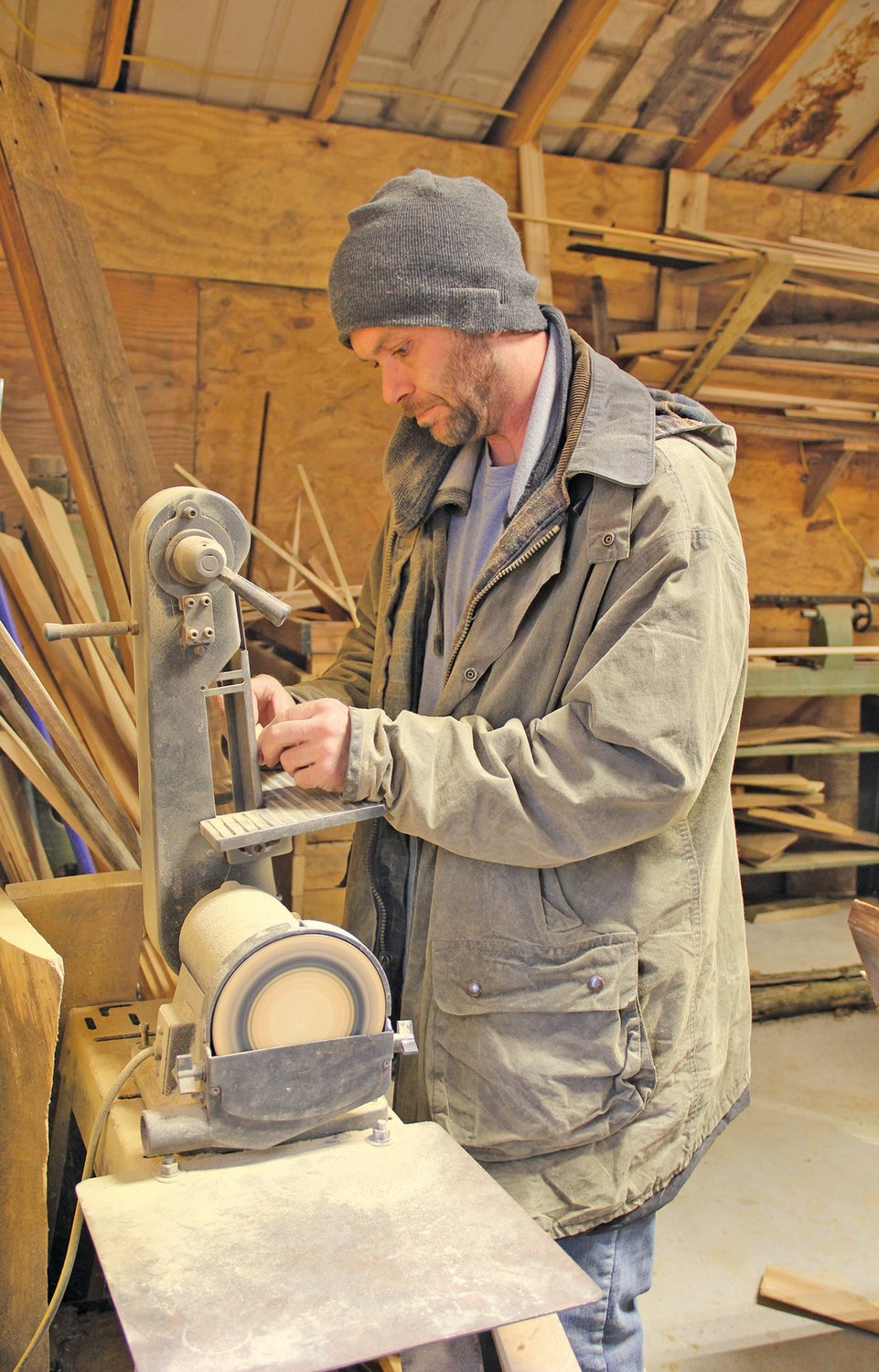 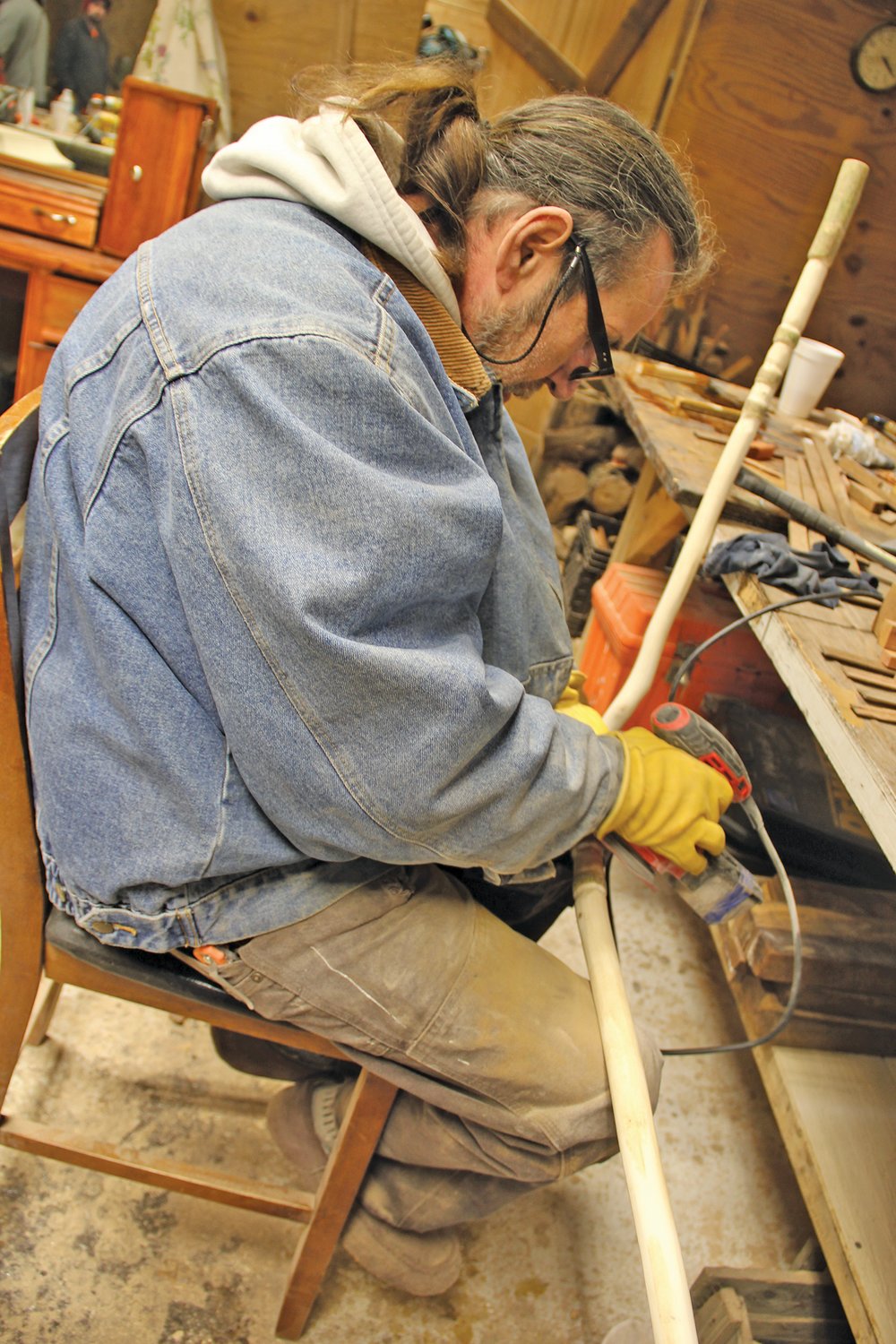 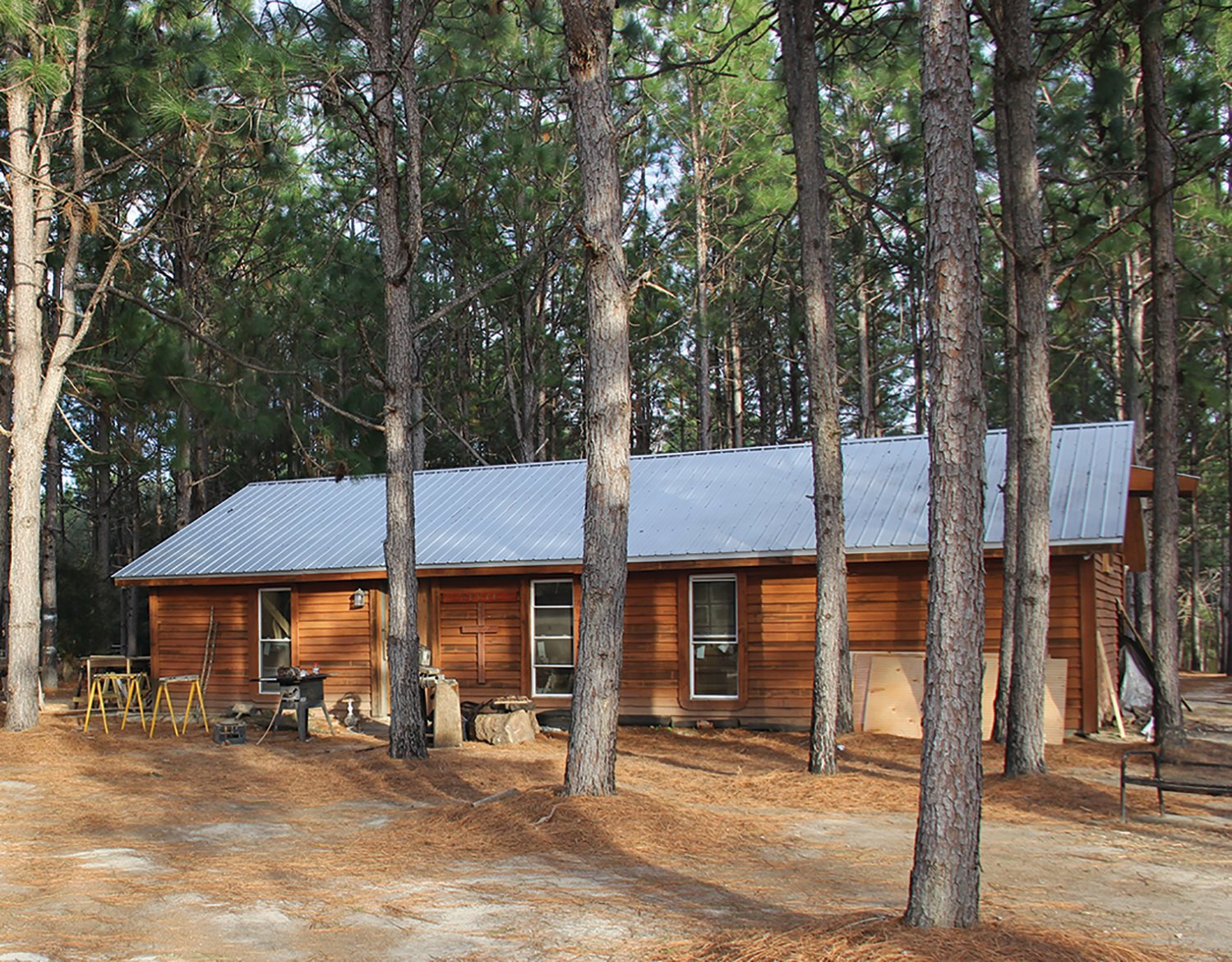 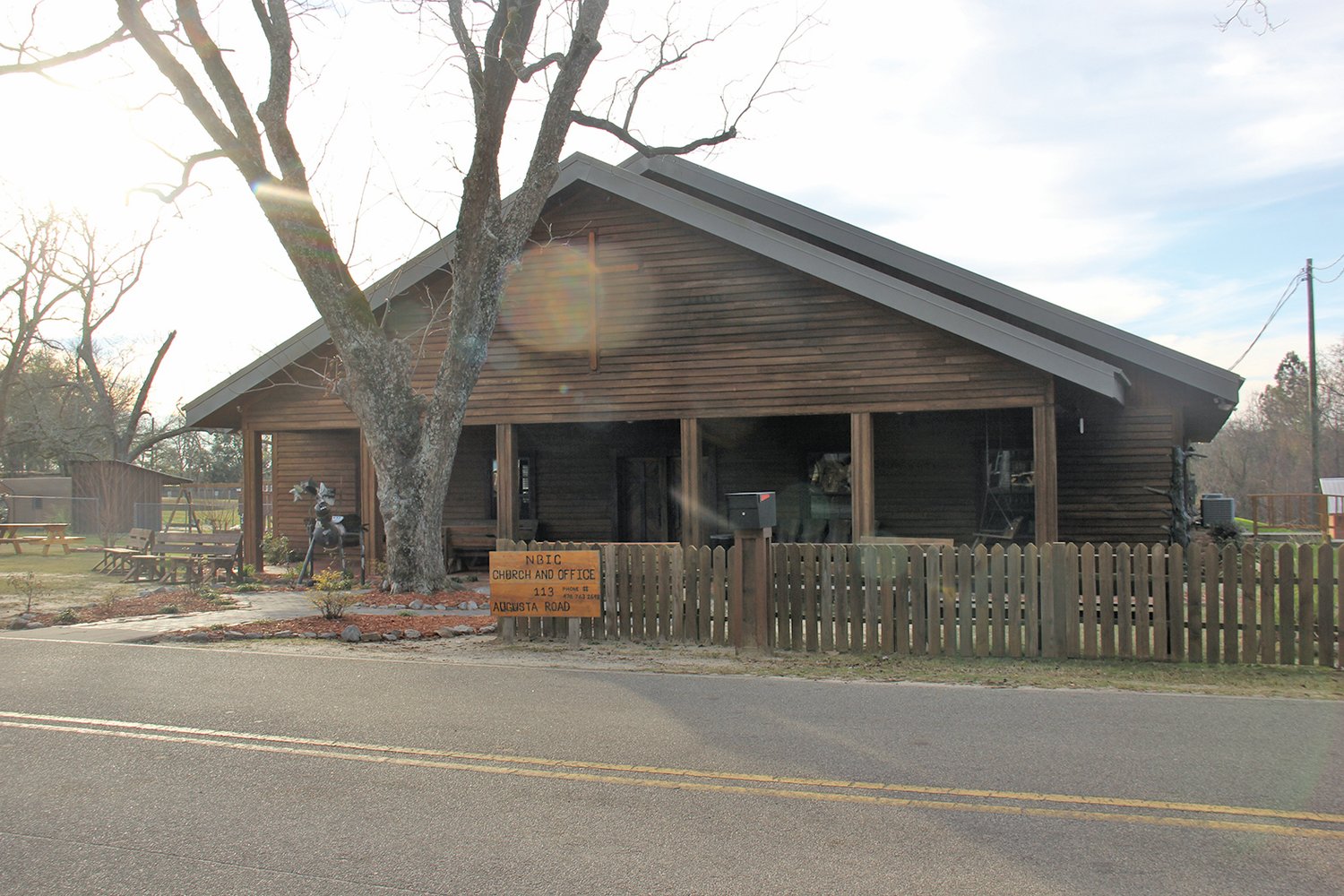 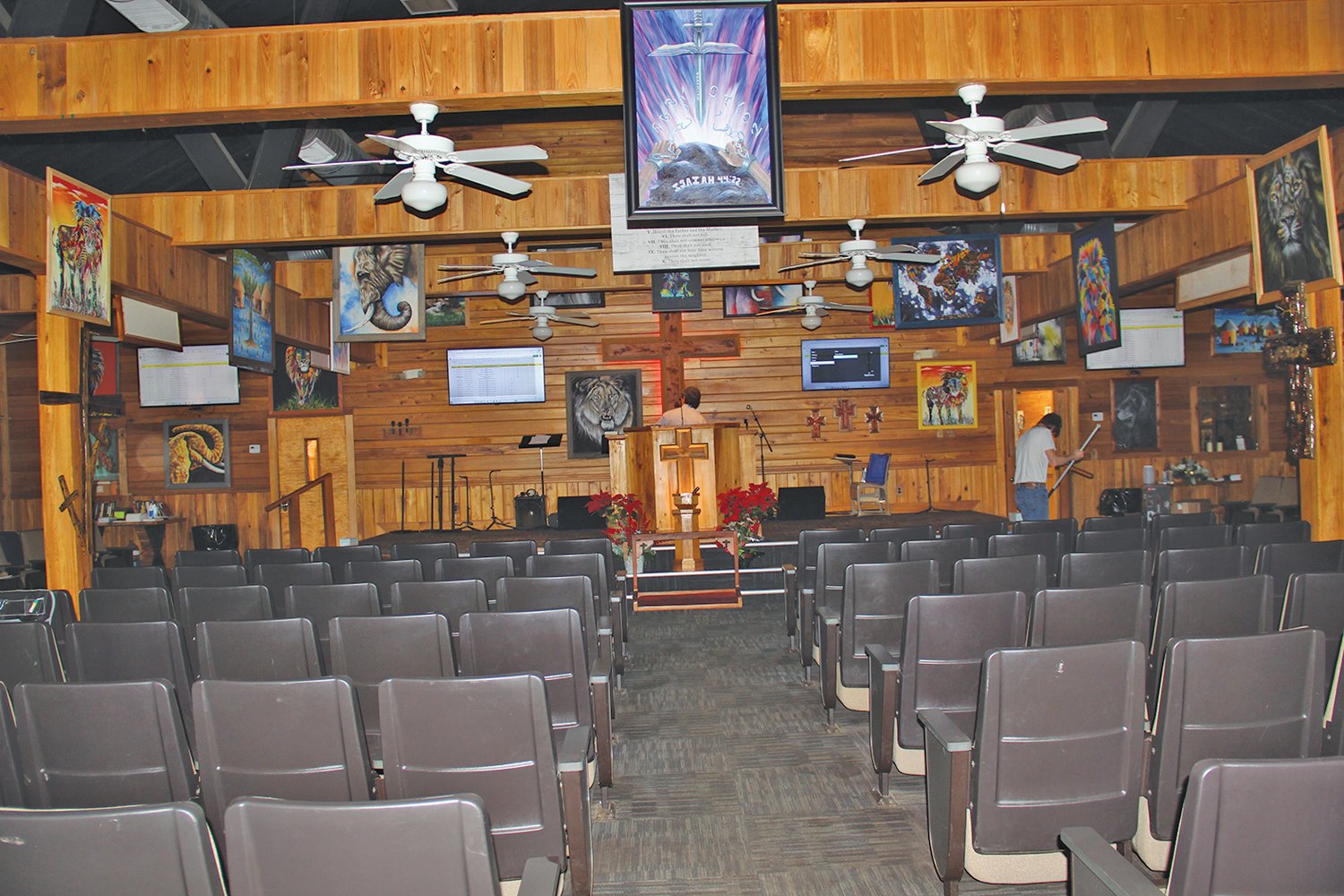 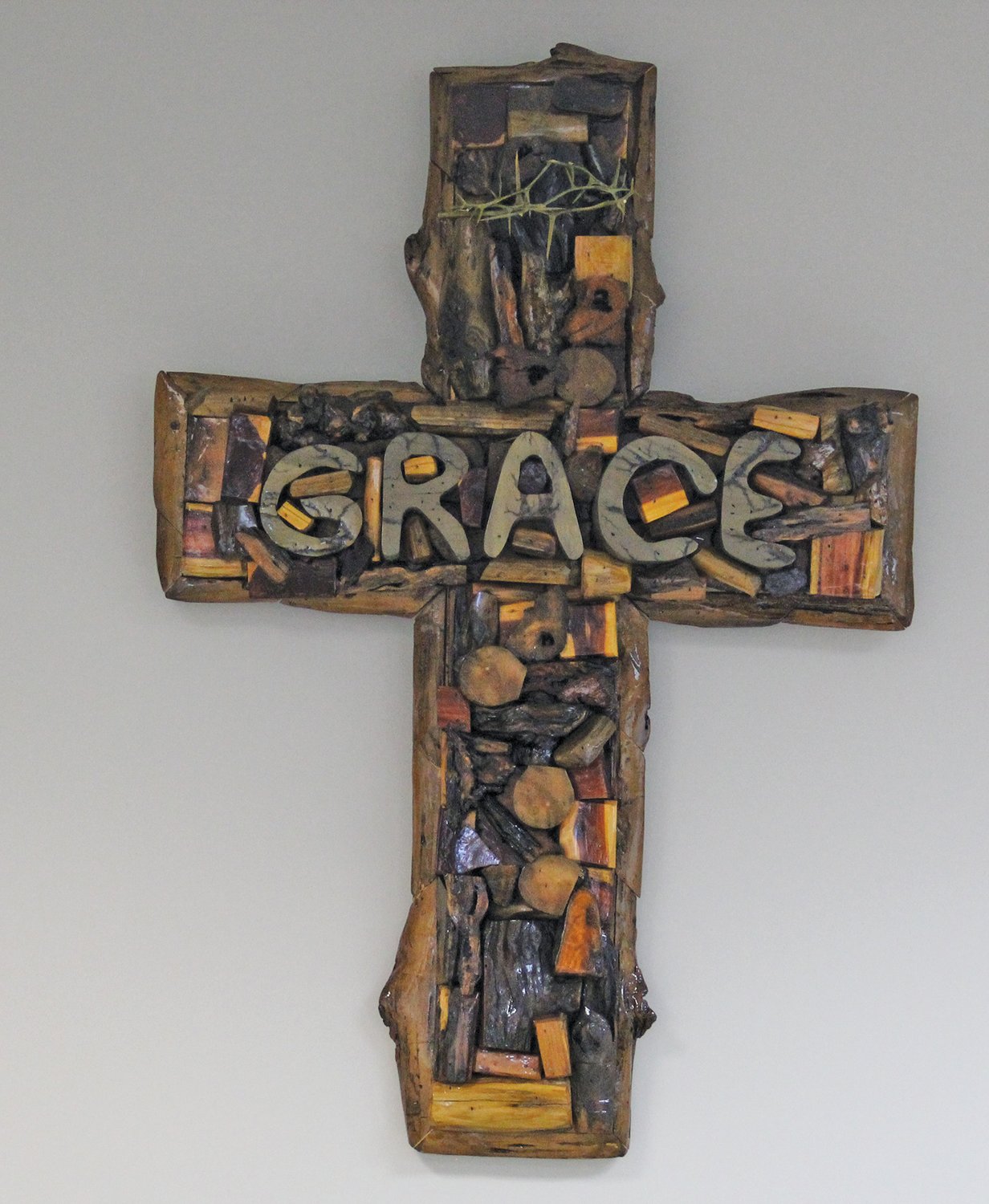 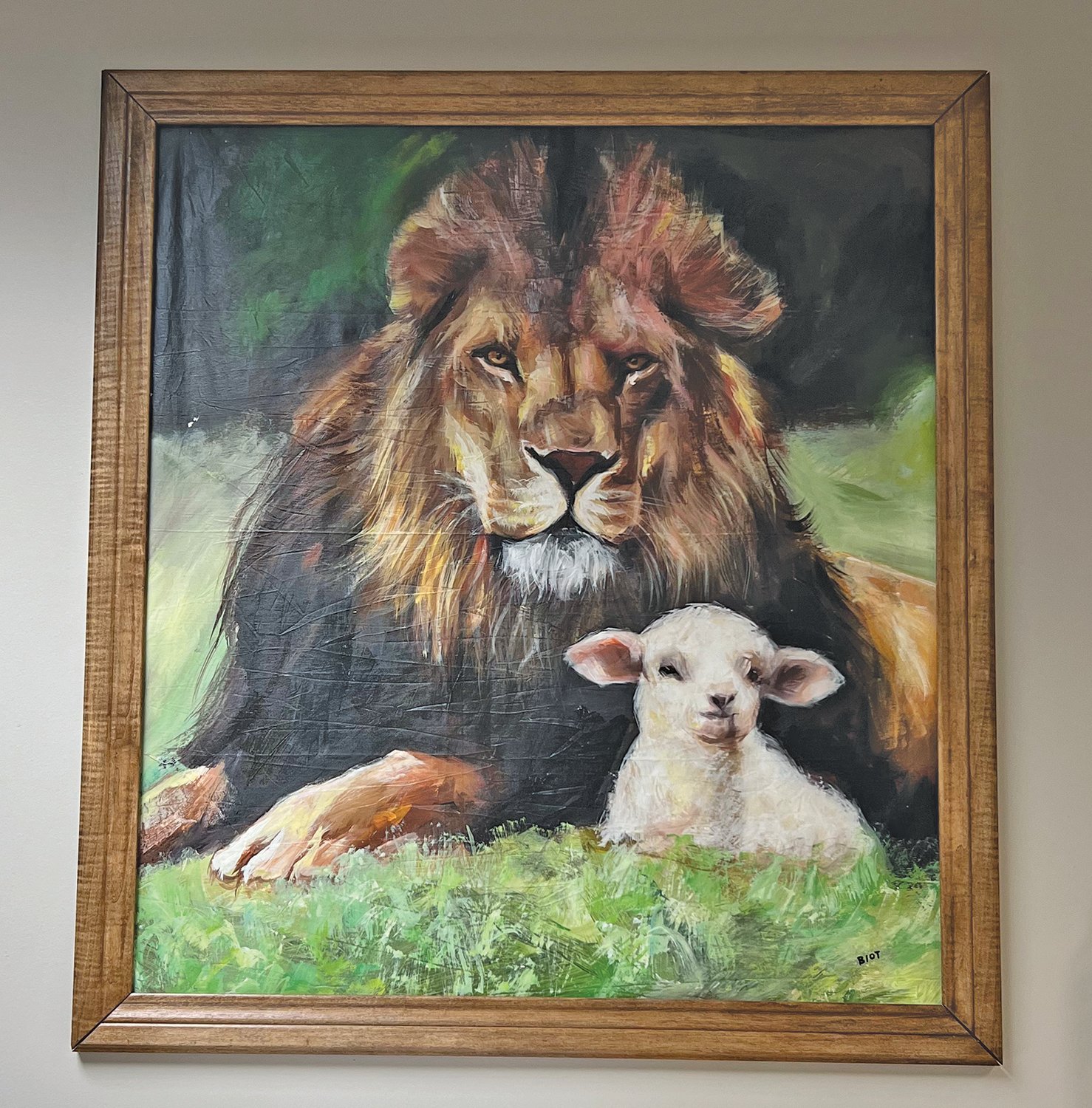 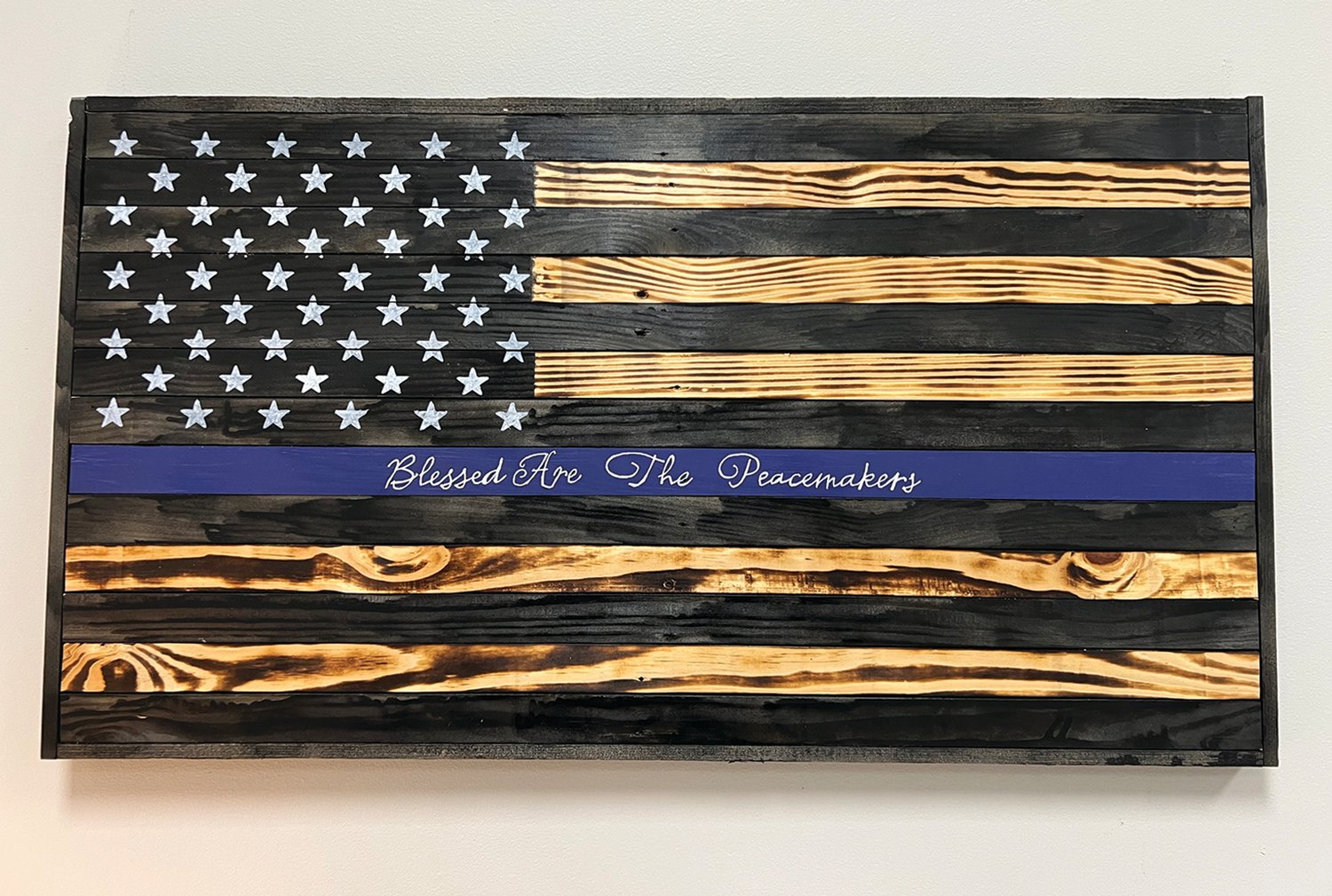 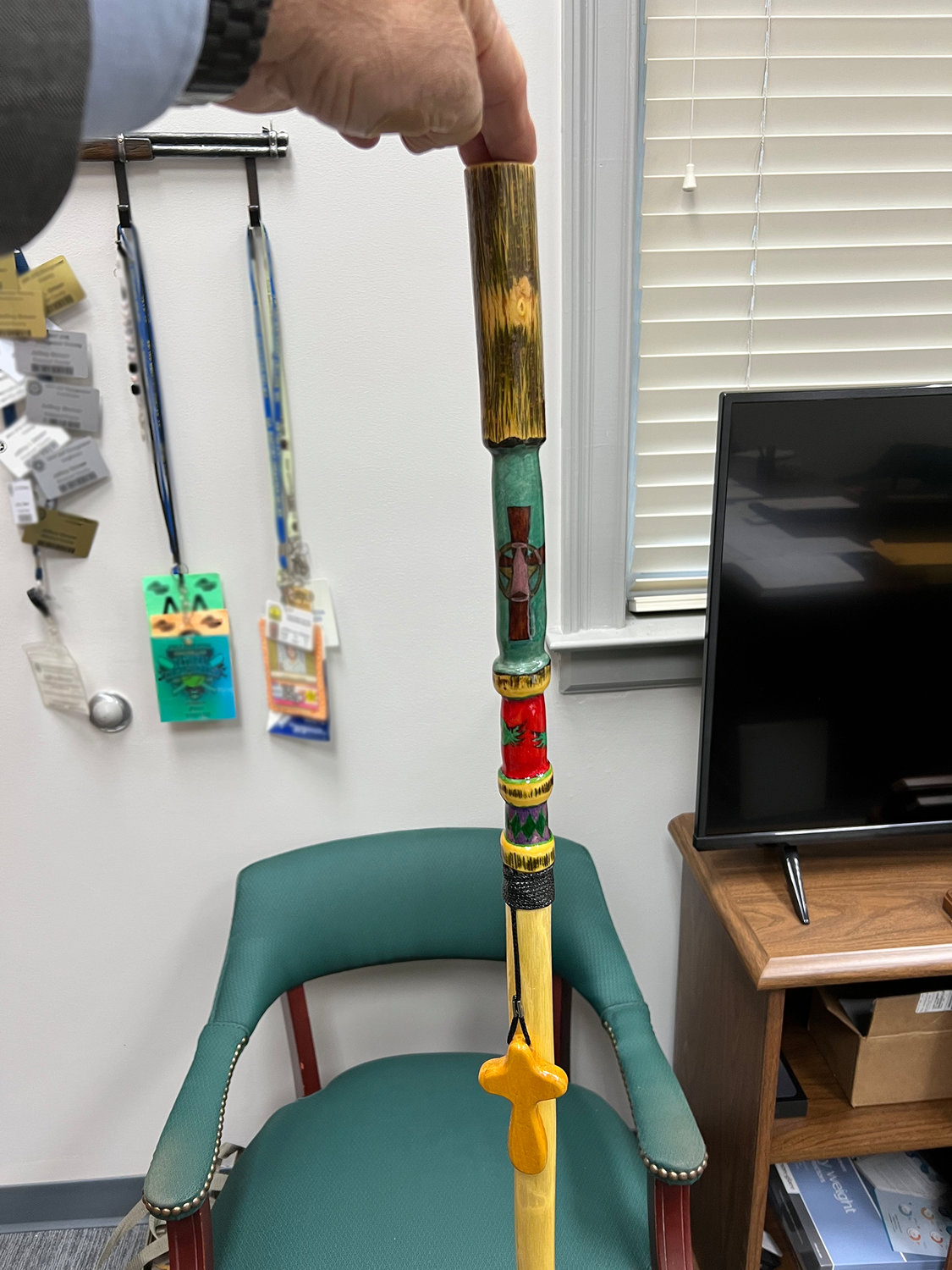 New Beginnings In Christ Men’s Recovery Home recently honored Garfield Chief of Police Curtis Armstrong in a very special way. NBIC residents and staff presented Chief Armstrong with an American Flag sculpted in wood as a token of gratitude for his support of the facility and his service to the community. Armstrong was recently appointed as Garfield’s new Chief and also serves as a deputy with the Emanuel County Sheriff’s Office.

“We wanted to give back to the community and law enforcement officers. We love, need and support the police as much as possible” NBIC residents Brent and Matt stated when asking about the recent gifts presentations, “This organization, it’s a God thing. Here, we learn to be productive men in the community and become closer with law enforcement officers, getting us closer to the overall goal of this organization,” they further commented.

“I appreciate this gift because it’s an example of the good work that goes on here, and also because it’s a symbol of the changes that are possible in people’s lives,” commented Chief Armstrong.

Sheriff Jeffery Brewer was also honored with an example of the skilled woodwork that is produced in NBIC’s woodshop. A wooden flag was also presented to the Emanuel County Sheriff as well as a Bible and walking stick, a gesture from the late Donald Atkinson, founder of NBIC. The sheriff, giving back to the community, also purchased a wood cross from the non-profit organization as well as two portraits hand painted in Uganda, Africa, with all proceeds being given back to the Uganda ministry.

“Since taking office last year, I decided to decorate the office and although our office is not Bible-based because we are a government organization, we believe in the Bible and we believe in God and we don’t mind people knowing that. That’s just where our morals lie. We also love giving back to the community and the purchased items do just that. The wood work proceeds are contributed back to the recovery home and proceeds from the hand painted portraits all benefit an orphanage in Uganda,” the sheriff stated. “I will proudly have this at the Courthouse, and I hope I don’t need the walking stick right away, but I am proud of the dedication, hard work and accomplishments of everyone at NBIC,” Sheriff Brewer concluded.

“The woodshop was a vision of Donald’s that corresponded well with the Atkinson’s overall vision – helping men in recovery and teaching them the good of giving service to the community. While we would like to sell the items, the vision of the woodshop was not to make money. It is about the overall goal of helping men in recovery. The skills they learn can be taken back into the world when they leave here and used to make a living or provide service to others,” NBIC Pastor Mike stated.

New Beginnings In Christ Recovery Home was established in January of 2005 by Donald and Joanna Atkinson. The facility is a midterm to long term Christian residential recovery program that is centered on spiritual values, awakening and acceptance of Christ as the personal savior. The program relies on Alcohol Anonymous directives, daily religious instruction and requires work five days a week in occupational skills training. Residents are provided housing, food, supervision, drug screening and legal services. No fees are charged, and no government funding is provided. Donations comprise 100 per cent of NBIC’s operating budget and are 100 per cent tax deductible. New Beginnings In Christ Recovery Home is a registered 501 C3 tax exempt organization.