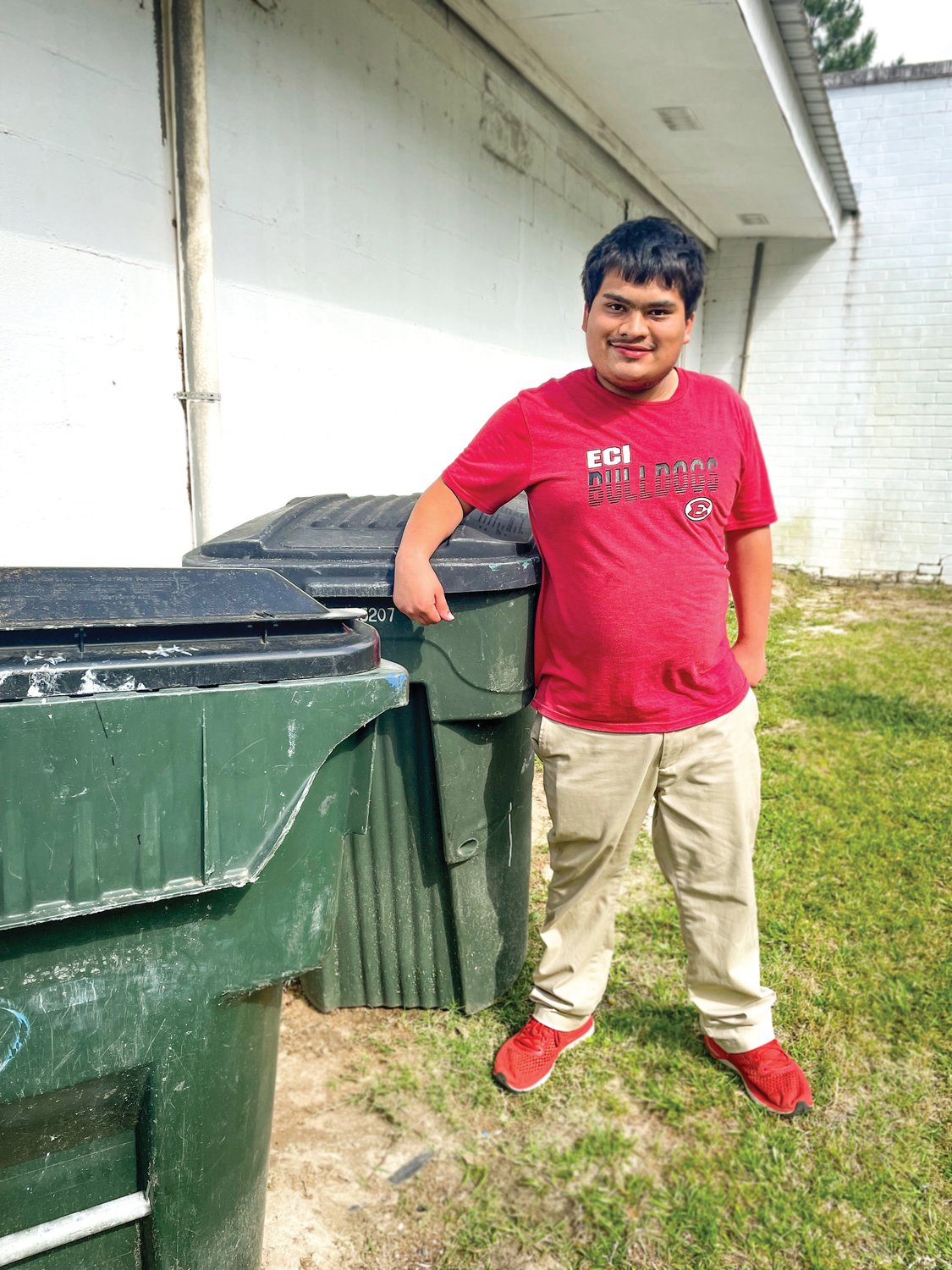 Kindness reflects what lives in our heart, and for Emanuel County Institute Junior, Jordan Albor, he leaves a reflection of goodwill through the streets of Twin City, by simply performing his daily routine of taking out the trash. “If it weren’t for Jordan, I would surely forget to take the trash out!” Twin City business owner, Jana Tucker, said, as she spoke of the eighteen-year old’s constant benevolence to her pecan confectionary shop All the Fixin’s. While many teenagers spend their afternoons trying to flee from their chores, Jordan sees them as more of a hobby, completing them with grace then walking to each downtown business and office space to ease their burden of removing the trash for them as well. “I started taking out the trash whenever I met chief Beech.”  Jordan explained… “I asked the chief one day if he wanted me to take his trash cans out and he said, ‘Sure!’” But Jordans grandmother, Annette Villegas, says that Jordan has been helping in this way since he was little, beginning with their neighbors. “Every week he would take the trash out for our elderly neighbors and those who were not able to do it on their own. Then someone else would come along and ask if he could take theirs and he would, then another person would come along, and it just began from there. Now, he pretty much takes on the whole block from where we live on highway 80 up to Highway 23, over to across from where the beauty shop is in front of the church, and all the way back.” In his rounds, Jordan includes Twin City EMS, Twin City Fire Department, Hall’s Mint Mart, The Bulldog Store, The Brown Bag Café, Stitch ‘N’ Print, Emanuel County Institute, All the Fixins’, Twin City Hardware, Twin City Medical Clinic, Twin City Drug Company, and any full cans that he passes by at any given day or hour. “It makes me feel happy to help others.” Jordan said through a soft and sweet smile. “He has always been fascinated by trash cans.” His grandmother added before reminiscing on a memory from his innocence. “When he was four, I tried to sign him up for baseball. He had on his Twin View jersey with his bleached white baseball pants that were clean and clay free because he wouldn’t go out on the ball field. He was too interested in the poly-cart. He kept jumping up to reach its handle until he finally got a hold of it and turned it right over. I said, ‘Well we’re not going to play baseball but if you let him pull your poly cart, he’s going to pull it.’ And he’s stuck true to my word ever since!” Jordan says that after graduation, he hopes to fulfill his dream of working for Allgreen Services. “After I graduate next year, I hope to be an official garbage man!” While he’s enthusiastic about the future, Jordan is already shining in the lives of Twin City natives by being his one true self. A gentleman with a courteous heart and helpful nature. “He spots everything!” Annette declared with a rosy smile in Jordans direction. “A few days ago, we were driving up to the Piggly Wiggly and he was looking to see how many carts were in the parking lot. Whenever we go to any store, that’s the first thing that he does… he looks to see if there are any carts that need putting away. If there’s a buggy in the parking lot, you can bet that it’ll be in that store before we leave.” She continued… “On this particular day, someone had left their wallet in a buggy, so he took the cart into the store with the wallet and gave it to one of the cashiers and let them know that someone had lost it and they needed it back. He's always doing an act of kindness. “Another wholehearted constant that Jordan displays, is taking in the groceries for his diabetic neighbor who struggles with mobility. What’s even more upstanding, is that Jordan doesn’t do these things with an expectation that he is going to receive something in return for his kindness, he does them because he truly is a genuinely good person down to his core. “Every now and then he’ll receive something from someone he helps because of their appreciation for him. He doesn’t anticipate it though. The first time it happened was when he first visited The Brown Bag Café and asked if he could take out their trash. So, he did, and when he left to go on to the next place the employees ran him down to give him brownies.” His grandmother said before Jordan excitedly followed with… “That was the best day!” She also credited Halls Minit Mart for always providing Jordan with a cold drink and the City who gave him an extra gift at Christmas with a bookbag full of goodies. While material things get thrown away over time, an act of kindness is never wasted. Some may say, ‘why should I care about kindness? I want to be smarter, more charming, and more beautiful.’ All are great goals to admire to achieve, but a kind heart is a rare gem to find. The world needs more Jordan Albors and the best place to start is exactly where he began, right here at home. “Do things for people not because of who they are or what they do in return, but because of who you are.” — Harold S. Kushner

If you know someone who is deserving of being in the Community Spotlight. Please send your submissions to Brittany at forestbladewriter@gmail.com.