From the Community Spotlight to the world's spotlight 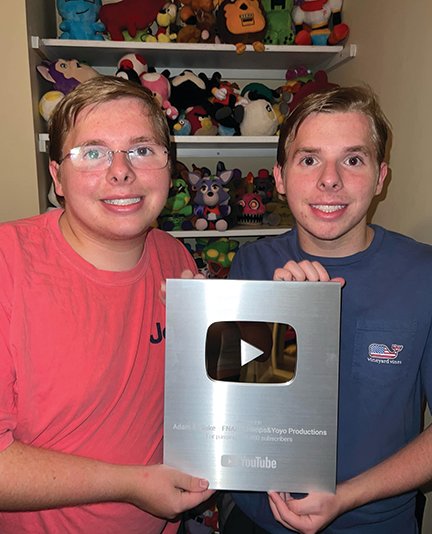 Seventeen years ago, a video-sharing website called YouTube was born and its birth changed our world by providing humanity with the ability to upload, convert, store and play back video content on the internet through free-expression. Its existence has played a role in the discovery of many influencers and artists including Justin Bieber, Shawn Mendes, Alessia Cara and even two young locals, Adam and Blake Sanders.

“We made our first YouTube video on July 1st, 2015. At the time, we didn’t know how to create an account or post the video, so we had to learn. Our first videos were inspired by other YouTube videos,” the Sanders explained.

The 19-year-old twin brothers are the sons of Jim and Kimmy Sanders of Swainsboro and their walk to fame began with humble beginnings and a simple upload of sharing their love for pop-culture.

The teens developed a channel called Adam and Blake – FNAF & Hoops and Yoyo Productions, a name that they came up with in honor of the stars that inhabit their videos, Hoops and Yoyo and the characters of a very popular video game, Five Nights at Freddie’s:

The Sanders have since amassed a following of over 100,000 subscribers and over 100,000,000 views. It’s an astonishing achievement that has earned them silver status and a YouTube Creator Award for the extraordinary effort that they have put into growing their channel and building a thriving, online community.

“Currently, we have 230,000 subscribers on YouTube and have 225,000,000 total views on all our videos since 2015. The physical award that we received is the silver YouTube play button. We got it for passing 100,000 subscribers!” they explained with excitement.

YouTube Play Buttons or YouTube Plaques are a series of awards from YouTube that aim to recognize its most popular channels, such as Adam and Blake’s. The award in which the Sanders received is a metallic, silver plaque embossed with their channel's name on it. When they received it last week, their family took to social media to share and celebrate the twin’s success. One very special, heartfelt message coming from their father, Jim, who shared a picture of them with their Silver Play Button along with these words:

Their parents also said that they hope they continue to do what they love, and their sister Anna shared that she doesn’t know of two dedicated people more deserving of such a prestigious honor.

“Sometimes I will watch them make a video behind the scenes and seeing how much work and dedication they put into their channel makes me unbelievably proud of them. It takes more work than some would think and it's just impressive to me what they have managed to do and how far they've come,” she said with sincerity.

The Sanders brothers are now eligible to apply for a digital verification badge because of their advancement in the social media world. The badge signifies a channel's authenticity which gives them an additional advantage and confirms two things: it’s the official channel of a creator, artist, company, or public figure and that the creator is serious about sharing social content. The last being an undeniable, steadfast strength, that the Sanders have and will continue to share with the online entertainment industry for years and years to come.

“We want to thank all our subscribers for their support. We really appreciate it so much! We want to keep making YouTube videos and have started posting on TikTok and we want to do more with that!” they concluded.

From the community spotlight to the world spotlight, Adam and Blake are certified stars who are teaching us all that we will never influence the world by being just like it. Congratulations to you both!