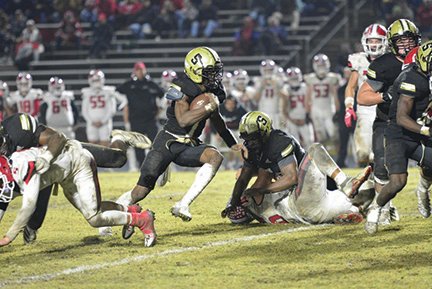 A thick fog was hanging in the air at Tiger Field this past Friday night along with a little uncertainity. As Swainsboro and Rabun County squared off, everybody from the weatherman to the coaches to the players and fans and even the guys in the booth, was waiting to see what would happen. They had waited all week and when the Tigers went 3 and out in an early possession, followed by shaky sets on each side, everybody was still waiting and wondering. The Wildcats established a timid ground game halfway into the 1st quarter with good execution, but speed was wearing a Tiger uniform for most of the night. Rabun finally cracked opened the box on the much-feared passing game to put up the first 7 points,. As time ran down in the first a low rumble turned into a roar as the Tigers emerged out of the fog and clicked off gains by Qin Brown and Ty Adams. Demello Jones joined the party and brought the crowd to life with a visit to the end zone, tying things up 7-7. The Tiger defense came alive as the quarter wound down with big defensive moves by Jonorian Foots and a late quarter sack by Tra’ lyvion Harris. The Wildcats bounced back and threatened but only came away with 3 making it 10-7, Rabun County. The start of quarter 2 was more back and forth with slips and slides on a wet field. Highlights of the 2nd period were courtesy of Jerrod Steward who launched a sub-orbital punt that pushed the Wildcats back to their own 9 yard line. Rabun County assembled the start of a ground game but then decided to go airshow and put the ball right back into the capable hands of Jerrod Steward for the interception. With a little over 5 minutes in the half, Swainsboro knuckled down and gave the Wildcats a little demonstration on the need for speed starring Demello Jones and Ty Adams. Landen Scott was automatic all night with extra points after touchdowns. Closing out the first half, Tigers went up 14-10.

The 3rd quarter saw Rabun County continuing to push and having success with their quickness and run game. By now, the SHS Tigers seemed to have more and more of the game in hand. With Demello and Ty Adams swapping in the QB slot, the Tigers pulled out the stops and racked up 98 yard trip courtesy of Jakari Nobles, Qin Brown and Demello Jones. At 21-10 things were now a little less uncertain for the hometown crowd. The Tiger defense was not giving out any breaks either as Gauge Coxwell, Tra’lyvion Harris and Da’rius Phillips all collected sacks for Swainsboro. Rabun County struggled in the closing minutes of quarter 3 with penalties called and not called on both teams taking an obvious toll on the Wildcats spirit. The Tigers however continued to charge ahead with a 55 yard touchdown pass from Ty Adams to Demello Jones that pretty well told the story. With a score of 28-10 the fog had lifted and Swainsboro had just about sealed the deal. Bryson Tarver rolled up rushing yards in the final quarter and Ty Adams added his contribution as well to the stat sheet. Demello Jones carried down to the 3 in a final Tiger drive and with 8 minutes left in the game the Tigers put a final 7 up to hang another victory in this season's march to State, 35-10.

Once again, Demello Jones, Ty Adams, Jordon Williams, Qin Brown, Bryson Tarver and Jakari Nobles all shared ball time in the rushing stats. Keshon Deloach, Demello Jones, Jordon Williams, Jerrod Steward and Jakari Nobles piled up receiving yards. Landen Scott had an amazing 5 for 5 in extra point kicks. The Tiger defense definitely did its share of heavy lifting Friday night and kept Rabun County off balance and off its game, both on the ground and in the air. The Tigers now head to Ocilla this Friday and things don’t get any easier. But this team doesn’t thrive on easy. This team thrives on playing the best game they can play. This team is ready. The Tiger fans are ready. This community is ready for another big win and State better get ready.