They aren’t the boys of fall, they’re the players of the year: DeMello Jones and Ty Adams 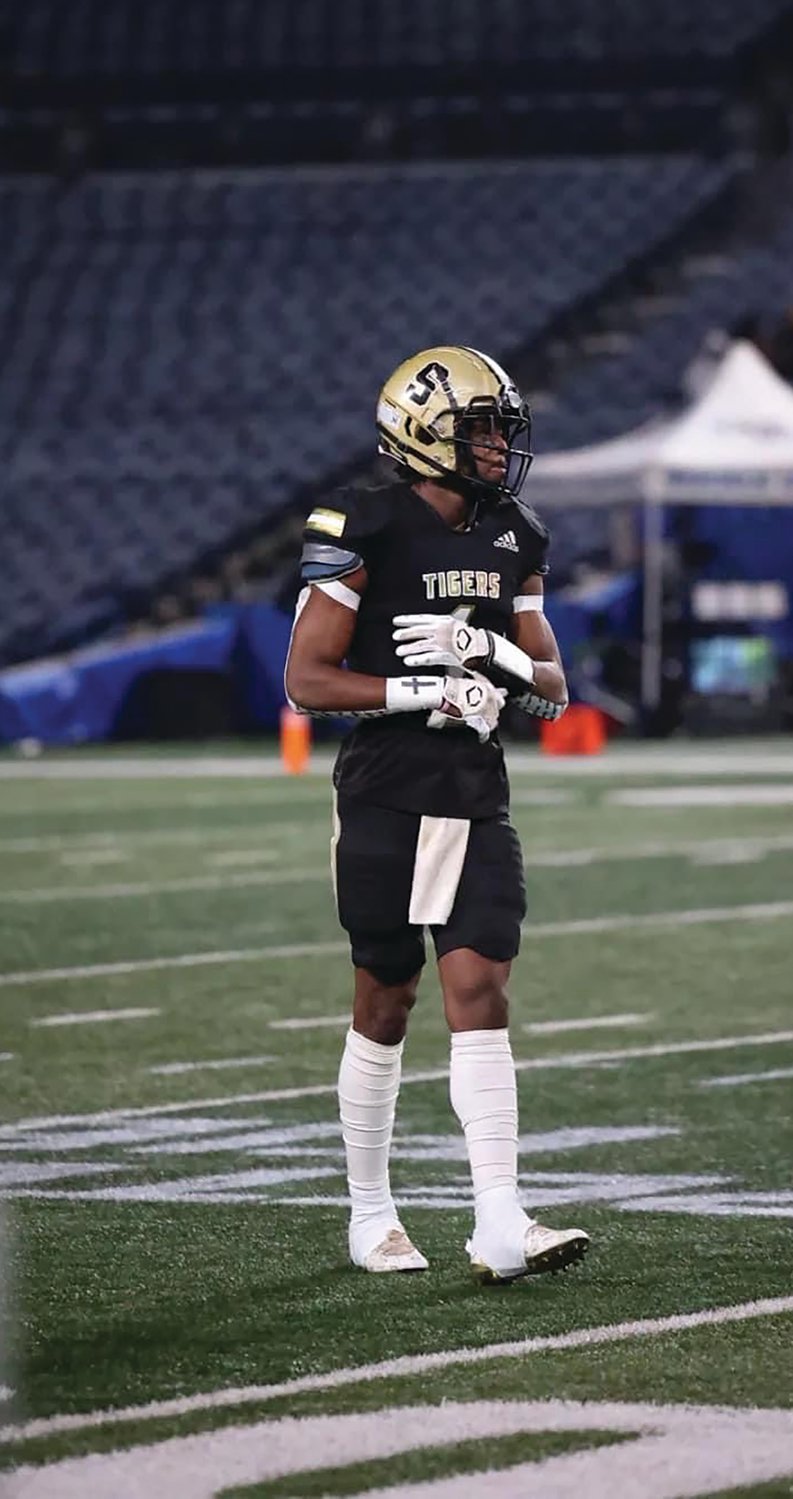 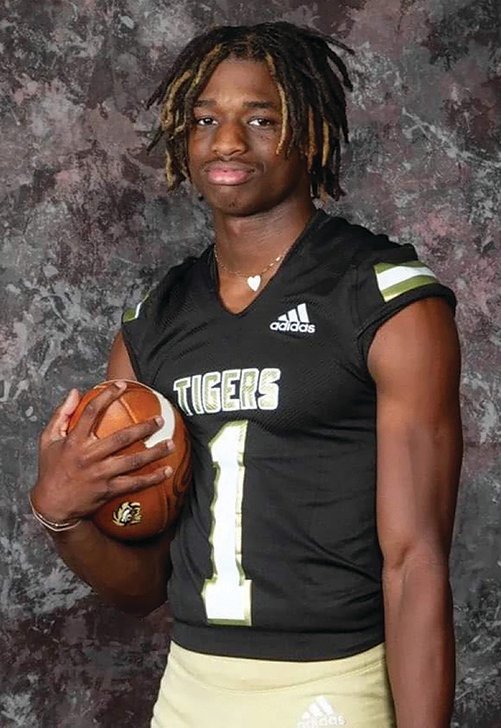 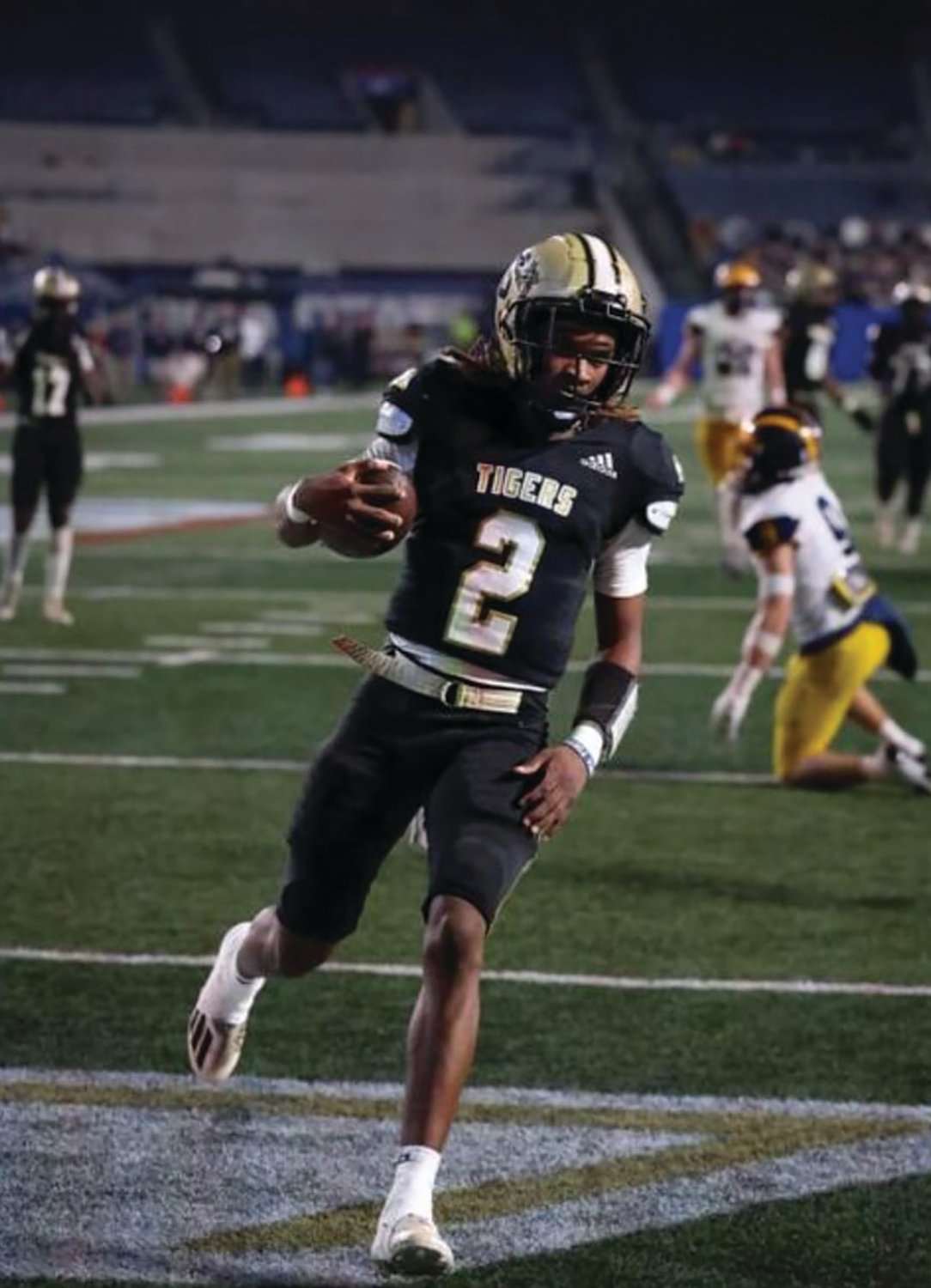 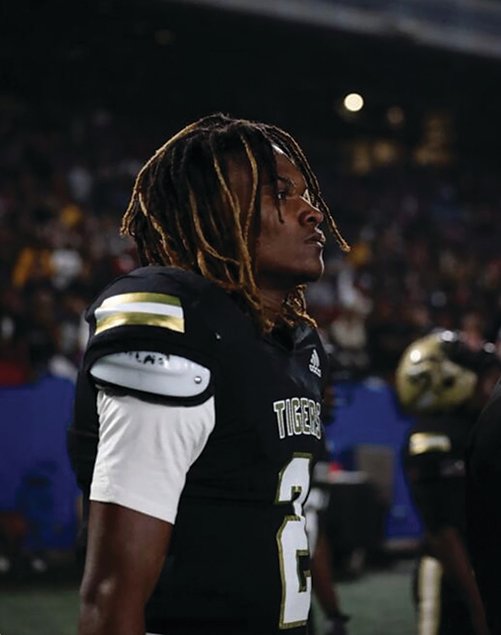 For Emanuel County and Tiger Nation, Friday, Dec. 8, 2022, was a night unparalleled by any other. However, the deja vu from 22 years ago seemed to radiate throughout the atmosphere, serving chills on an oddly warm December evening. As the stars brightly shined above downtown Atlanta, beneath the 8 o’clock sky, Panther Stadium was filled with an energy under those Center Parc lights that can only be described as electric.

“If I could crown a cheer champion and an energy champion there is no doubt that the title would be going to the Swainsboro Tigers,” sportscaster, Nikki Noto Palmer, said with a contagious smile that she caught from our home-crowd’s vivacity. “They have yet to sit down in their seats! Their energy is unmatched. I can’t hear myself think, and hey, for what it’s worth, Prince Avenue Christian is only 50 miles away, but Swainsboro is 145 miles away!” she exclaimed, while looking into the camera as it panned over the bleachers at local faces that filled it to the rim with roaring hype-men and supporters from the crossroads of the great south.

The enthusiasm from the crowd never wavered, and neither did the action on the field. The Swainsboro Tigers held their own and proved to Prince Avenue Christian that their roar was just as bad as their bite. However, after an impressive season, the Tigers finished as State Runner-up, only falling to Prince Avenue by a final score of 52-34.

Despite Thursday’s outcome, the Tigers truly played their hearts out this entire season and left the Boro the same way that they returned to it, as champions. Because, you see, for athletes like them, football isn’t only for autumn, it’s a way of living. They made every away field their own and left their impact at each stadium as deep as their cleats left imprints in the turf. They aren’t the boys of fall, they’re the players of the year.

Swainsboro High Junior and the Tigers number 1 player, Demello Jones, was dubbed “a real freak athlete” by Jeff Sentell of Dawg Nation after receiving a scholarship offer from the University of Georgia only a week prior to playing in the GHSA Class A playoffs. This nickname is one that he’s earned, given his ability to play five or six positions including wide receiver, quarterBack, and cornerback. That’s not counting his work as an electric kickoff returner. As much effort goes into these players and their skillset, a rarity is finding one like Jones who plays offense, defense and special teams. However, he views every ounce of the game through optimistic eyes, even the training.

“It’s fun, football is just a fun and loving sport,” he said with a smile. Jones has been playing football since he was seven years old, and his talent clearly shines both on the field and the scoreboard. However, he explained that “working hard and always staying focused on the fact of knowing that there are a lot of other players” like him “who are trying to be the best in the world,” is what propelled him into the player that he is today.

“I work hard because there is always someone else that is working to be at the top,” Jones said.

“Not many prospects have had the wave momentum in their recruitments as that of Demello Jones,” Blayne Gilmer of UGA Sports said of the Swainsboro High School class of 2024, “do-everything playmaker.”

“It's safe to say that Jones's recruitment is blowing up. When you take a minute to watch his film, you can see why. Jones was relatively unknown and was unranked coming into November. That won't be the case long,” Gilmer further stated in an UGA Sports article that was published in November.

During the off-season, Jones also plays basketball and runs track.

“Last year we won the 4x100 at state and broke the school record without a senior on our team. We look forward to re-achieving that goal,” he explained.

Although Jones is an all-star athlete with a large fan-base, there’s something to be said about how humble he is when it comes to being a Swainsboro highlight. Through every accomplishment, he always includes his “brothers.”

“We have an unselfish team, and we all play for each other,” Jones explained. “We all push each other and practice hard to make each other better.”

Jones further expressed his gratitude to Swainsboro High School Coaches Scott Roberts, Dwight Smith, Chase Giddens, Neal David, Ashley Hooks, Morgan Jersey, and David Ray, for providing him with their critique and instruction which paved the way for many of the opportunities that have unfolded recently.

“My whole coaching staff pushed me to be the player that I am today, and I thank each and every one of them for that,” Jones said.

He also gave a shout-out to his parents, family, teammates, coaching staff, teachers and fan base for their unyielding support and love that they have showered him with from the very beginning.

When asked, what does being a Swainsboro Tiger mean to him and what legacy does he feel like he’s leaving? Jones responded with: “I feel that playing and being able to say that I've had a chance to compete for a championship is a big accomplishment.”

After a reflection on Thursday night's loss, Jones went to Facebook to share his thoughts and wrote:

“We fell short, but GOD gave us hands and feet to get back up and go harder. I can’t be more thankful for this team that I am happy to call myself a part of. I loved being with this group of people who I call my brothers! I’m gonna miss the class of 2023 and I wish that the season had the outcome we all expected and hoped for. With that being said, #1 out till next year! Georgia State, we’ll be back!”

Thursday’s game was the last for Senior Ty Adams as Swainsboro’s Quarterback and Free Safety, who hung up his #2 jersey, leaving big shoes to fill. Although Emanuel County knows of Adams as the G.O.A.T, during Thursday night's game he left the rest of Georgia speechless, including GPB Sports Program Host, Matt Stewart, who said on live television, “I haven’t seen a Quarterback this fast in a long time.”

The offer from UNC came in August after he first committed to East Carolina State in June. Once Adams attended UNC's season-opening win over Florida A&M and talked with UNC’s cornerback coach, Dre Bly, his heart was set on becoming a Tarheel.

“Bly said that he loved my length and speed," Adams told Inside Carolina. "I like corner. Going in man coverage, one-on-one -- I'm very competitive, so I like it."

While Adams' future is bright, it was his Swainsboro legacy that lit his path. Adams began playing football in third grade, when he was just a “tiny tiger” at Swainsboro Elementary School. However, it was during his junior year that Adams began to make football an art, sweating black and gold talent with every touchdown.

“I just kept working harder at practice and during the games. Grinding on the off-season has helped me reach my accomplishment. I stayed in shape by training on the weekends and going to the field to do drills with my teammates,” Adams explained.

He also said in a heartwarming confession that without his team, he wouldn’t be the player that he is today.

“Those guys have always been there for me no matter what! Being around them has taught me to always be a leader and set examples for the upcoming generation. My team is amazing because we’re not selfish, we play hard and work together, and our coaches play a big part in us being successful by pushing us to be the greatest we can be.”

One of those coaches being Swainsboro Defensive coordinator, Dwight Smith.

“Dwight Smith has been the most influential coach to me,” Adams explained. “He always pushed and motivated me to be the best athlete and leader on and off the field. All my coaches play a big role in my life and I wanna thank them for everything.”

Adams also stated that the Tigers fanbase has always been very cheerful and supportive, but the one fan who can out-cheer them all is his mother, Meyoshi Worthen.

“She is a true fan because she cheers for the whole football team. Two of my teammates were asked ‘out of all the fans in the stands who do y’all hear the most?’ and they replied, ‘Your mother,’” he said as he laughed. “My mom deserves so much love because she has been a very supportive and encouraging mother through this entire season and I hope she knows how much I appreciate her.”

Other than his incredible mother, Adams also wanted to give a shout-out to every single person in his life that never faltered or lost hope in Tiger Nation.

“First off, I want to thank the man above for giving me and my teammates the talent to play football and allowing us to make it to state! I’d love to give a shoutout to all my past and present teammates that I have played football with at Swainsboro High School. Shoutout to my coaches, again you guys are the best! Shoutout to my family and friends for being very supportive! Also, shoutout to the Swainsboro Tiger fanbase, thanks for all the love and support!”

The impact of Ty Adams will echo throughout the halls of Swainsboro High School for generations to come. His time as a Tiger was the beginning of what will surely be a legendary career that will earn him a fanbase much larger than Swainsboro, but something that can be said about Adams is that he will never forget where he comes from.

“It has been an amazing year playing for the Tigers. We had some ups and downs but continued to proceed through it because I knew this year, we would go farther than last year. I will always bleed black and gold,” he said with a smile before leaving a message for the upcoming classmen. “Please always remember that dreams can come true for anybody and always be your best because you are the only one that can determine how far you go in life.”

After Thursday night’s game, Adams left his heart in one last post as a Swainsboro Tiger. It said, “I’ve enjoyed every moment being part of this amazing football team. I wouldn’t trade ya’ll for anything, I love you guys! Even though we didn’t get the outcome we wanted, we still gave it our all. BIG THANKS to the coaching staff, you guys are the best! With that being said, #2 is officially signing out, thank you Swainsboro High School Football.”