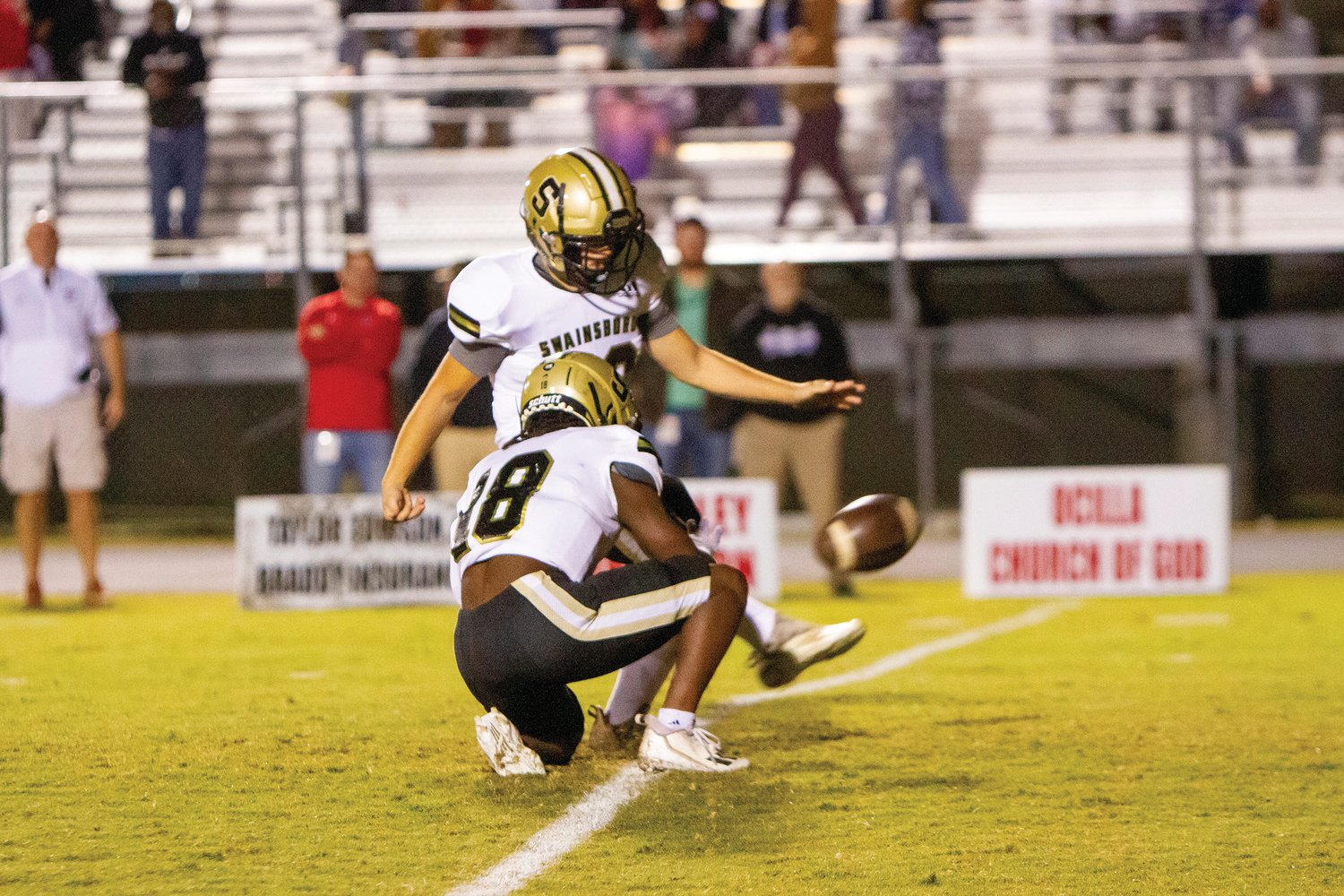 If you like an old-fashioned football contest of skill, strategy and pure power, Friday night’s game was just your style. In front of a loud, loyal and spring-loaded crowd in Ocilla, the SHS Tigers took on the last obstacle standing in their way to the state championship playoff in Atlanta. No stranger to playoffs, the Irwin County Indians didn’t seem to be quite ready for the first Tiger drive of the evening. A steady advance supervised by QB Ty Adams called on runs by Qin Brown, Jakari Nobles, and a keeper by Adams himself to quickly move Swainsboro down to the Indians 23-yard line. On a third and 1 call, the Tigers offensive line pulled back the curtain and Demello Jones took a 23-yard dash straight into the end zone. Landen Scott followed up with the point after for a 7-0 Swainsboro post. The Indians of Ocilla opened their show on the Tiger 35- yard line with a ground assault that was interrupted by the outstanding Tiger defense and a showcase stop by Jerrod Steward. With 5:16 left in the quarter, Irwin County fumbled ,and the Tigers took over. Swainsboro again moved the ball on the ground with mixed results until Demello Jones at QB took the snap, got bottled up by an Indian ambush, and broke out a little “Mellow magic”, breaking free and sailing for a 66-yard cruise into the end zone. Irwin County got a hand on the extra point attempt and snatched 1 point back bringing the board to 13-0 Swainsboro lead at the end of quarter 1. Irwin County Quarterback Cody Soliday promptly brought the Indians back into the fight with a touchdown pass to open the second quarter moving the board to 13-7. A Tiger drive worked on the clock beginning at 9:26 in the 2nd quarter and featured gains by Ty Adams, Jordon Williams, Bryson Tarver, and Demello Jones. Driving down to a 2nd and goal, Jones once again hit paydirt and took it in for his 3rd TD of the night. With 6 minutes left in the half, the Tigers went for 2 points, but had to settle for six bringing a 19-7 score to the board. Irwin County pressed harder on the next possession with Soliday overcoming an Indian penalty to move the team down the field. A great defensive effort by Swainsboro held Irwin County out of Tiger territory but the 2nd quarter ended with no point change despite a late Swainsboro possession.

Quarter 3 began with a typical, no-surprise back and forth with the two teams. Irwin County continued a hybrid offense with airball and ground pounding with mixed results. Jonorian Foots scored stops and interruptions in the Indian backfield and the Tiger defense held tight. As the quarter wore on, battle fatigue began to show on both sides of the ball with penalties all around. Swainsboro got an interference call and with 5:47 left in the third, Irwin County pushed from inside the 10 and continued to add to their score, 19-14. As the quarter got short, the drama got long, and the crowds got loud. The Tigers struggled with short gains and were looking for their rhythm while the Indians also ran into trouble courtesy of the Tiger defense and Tra 'Lyvion Harris and Jakari Nobles tackles. Soliday struck again with passing and Irwin County was set to score as the 3 rd period ended.

The last quarter of the game was straight out of an old movie. Irwin County scored as the quarter opened up making it 21-19, Indians on top. With under 11 minutes to go, the Tigers got the ball and moved down field. Jones and Adams swapped running slots and within minutes Swainsboro was inside the Indian 5-yard line. Jones was denied on 3rd and goal. Landen Scott goes in for the field goal try which is blocked, recovered and run back to the Swainsboro 45, then to the 28 by the Indians. Under 5 minutes left in the game. Soliday fails to get the first down for Irwin County, and an attempted 42-yard field goal falls short. With the ball back in Swainsboro hands Ty Adams gives to Qin Brown for 13 yards. Under 4 minutes left. Adams runs the ball up to the 38-yard line. On the next play, Adams hands off to Brown for a 1st down with 2:05 left in the game. Ty Adams runs for a gain, but his pass is incomplete. On third and 8, DeMello Jones runs for the end zone but is horse-collared and goes down.. With the penalty on Irwin County, it's now 1st and goal for the Tigers at the 13-yard line. With 49 seconds left, the Tigers called run but no gain came. At 4 th down with 12 to go and the clock running down, Landen Scott ran onto the field and without hesitation, took care of business and kicked the winning field goal. Final score: Swainsboro 22, Irwin County 21. In a storybook finish to a truly unbelievable season, the 2022-2023 Swainsboro Tigers are now poised to compete for the State Championship, Class 1A, Division 1 classification. The final game will be against Prince Avenue Christian School of Athens, at Center Parc Stadium in Atlanta, Thursday, December 8th at 8 p.m. The game will be televised on Georgia Public Television, locally seen on Channel 9.