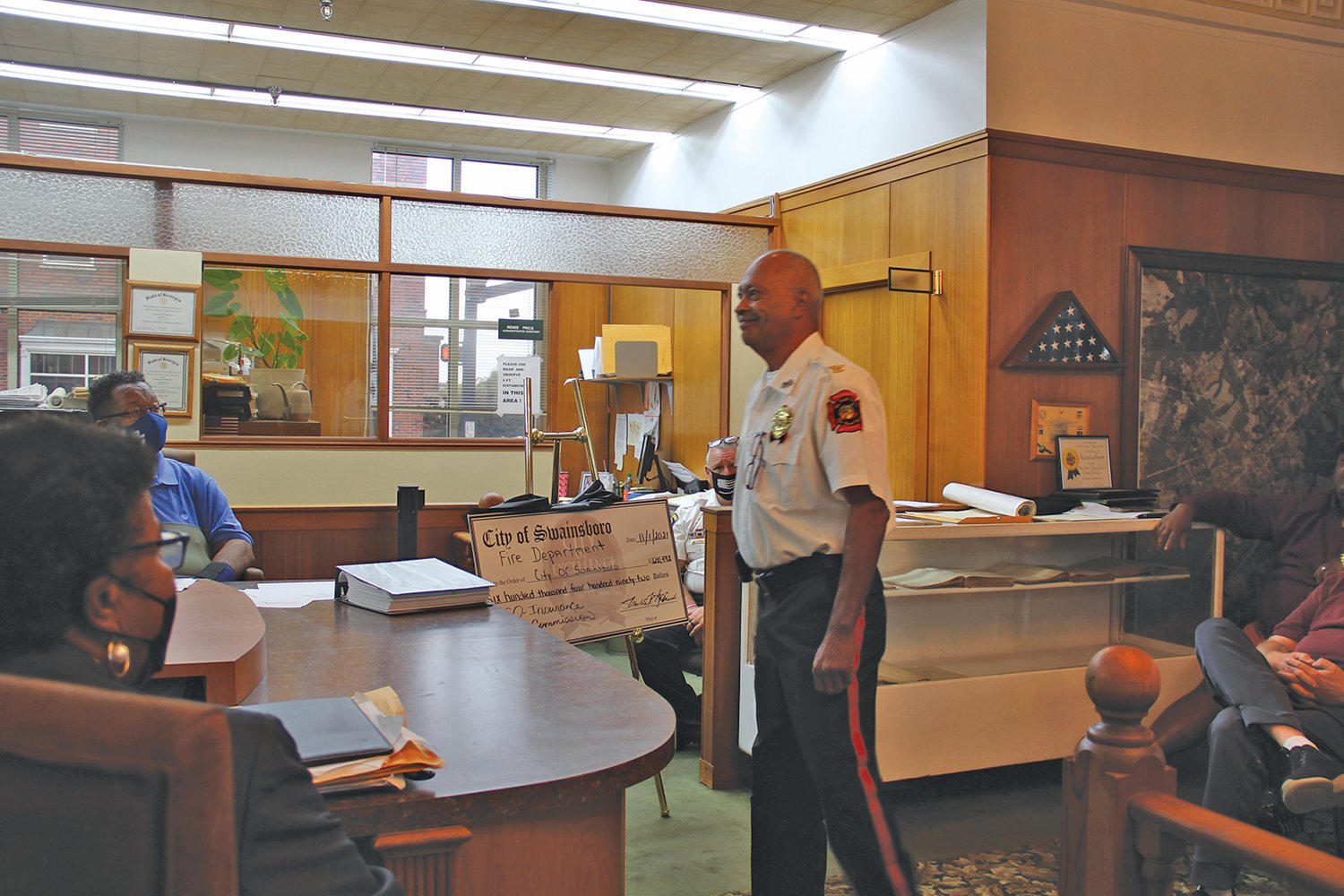 Swainsboro City Council and Mayor Charles Schwabe convened for their regularly scheduled monthly meeting on Monday, November 1, at 6 p.m. at the Swainsboro City Hall. Mayor Schwabe called the meeting to order and Bishop Bertha Jones of Williams Grove Church gave the invocation. The pledge was then recited by all.

In reference to new business…

• Swainsboro Fire Department Chief Mike Strobridge presented a check to the city in the amount of $600,492. With this being the largest check presented to Council by the Swainsboro Fire Chief, he informed Council the funds came from recent approvals received in obtaining such large numbers from Standards and Training, ISO, and Homeland Security evaluations.

•Shane Cox of Clearwater Solutions addressed council with repair quotes for well seals for city wells No. 4 and No. 9 and control panel and wire repair for lift station 15. Repair costs were given to council and included $7,500 (each) for well seals and $5,725 for the control panel and wire repair with turnkey included. Casting first motion for approval of the repairs and associated costs was Johnny Ray Stafford. Julian Sconyers seconded and remaining council voted accordingly.

Men Reaching Men addressed council on plans for a prayer vigil. Councilmembers were advised that a permit for the event has already been obtained and the event is for the entire county to attend and lift prayer for unity for all residents of Emanuel County.

Councilperson Faulkner advised council that a petition baring 300 names has been received by Al Houston in support of a name change for Gumlog Park to be changed to Jarrell R. Phillips Community Park. Making first motion for approval of the name change was Faulkner, who was seconded by Stafford with all remaining council voting in favor. The city will cover expenses of signage for the park.

Greg Bennett addressed council with a request to annex county property connected to city property for the purpose of building a subdivision in the city limits of Swainsboro. He advised that the project would generate approximately $8.5 million tax revenue and further requested the city assist with water and sewage connection costs guesstimated to be approximately $76,000. Voting for approval of Bennett’s request was Parker. Faulkner seconded and remaining council voted accordingly.

A second reading of Walgreens application for alcoholic license was made by council.

Renee Price addressed council with the approval and adoption of a language access plan (LAP) for CDBG grant approval. She advised that two individuals have dedicated themselves to assist with this process, one who will assist with Spanish translations and the other to assist with translations for Indian language interpretation. This is a requirement in order to receive CDBG grant funding. Motioning for approval was Parker who was seconded by Faulkner. All remaining council voted accordingly.

Discussion was then held on the American Rescue Act and project list. In order to obtain the funding, Parker advised progress would have to be made before a February 2022 deadline in order to obtain the other half of the 2.8 million dollars. Have of this funding has already been received but will be required full reimbursement if no action is taken to utilize the money by guidelines. Parker advised of options, one being to utilize a portion of the funds to appoint a new city employee for associated projects for the “underserved” city and its residents. He submitted a name of interest for this capacity, that being Willie Burns, former mayor of Washington, Georgia. Faulkner suggested a workshop meeting be arranged for further discussion and/or action to be made.

Mayor Schwabe gave an update on the current status of city projects, loan discussion and future changes made in project administrations. He advised that as of current date, $97,348.24 has been invested in the Community Action for Youth project. He also advised that $25,220 has been invested in The Karrh Theater project. Both projects have also benefitted from private donations made.

Listed on the agenda was the ratification of the 2022 millage rate discussed in last week’s meeting session. Mayor Schwabe advised that an error occurred in the advertising of the city’s millage rate last week and confirmed that the previous plans for the reduced millage still stands as discussed in last week’s meeting. He further advised that no ratification will take place to the proposed new millage rage and that the millage rate would be re-advertised with a follow up meeting to be held on the matter.

Faulkner inquired on an update for easement installments being made to the Robin Road project and advised that she has not seen the first easement installed as previously discussed. Mayor Schwabe advised that further action would be made in order to address this issue.

Council then entered into executive session to discuss a personnel issue.