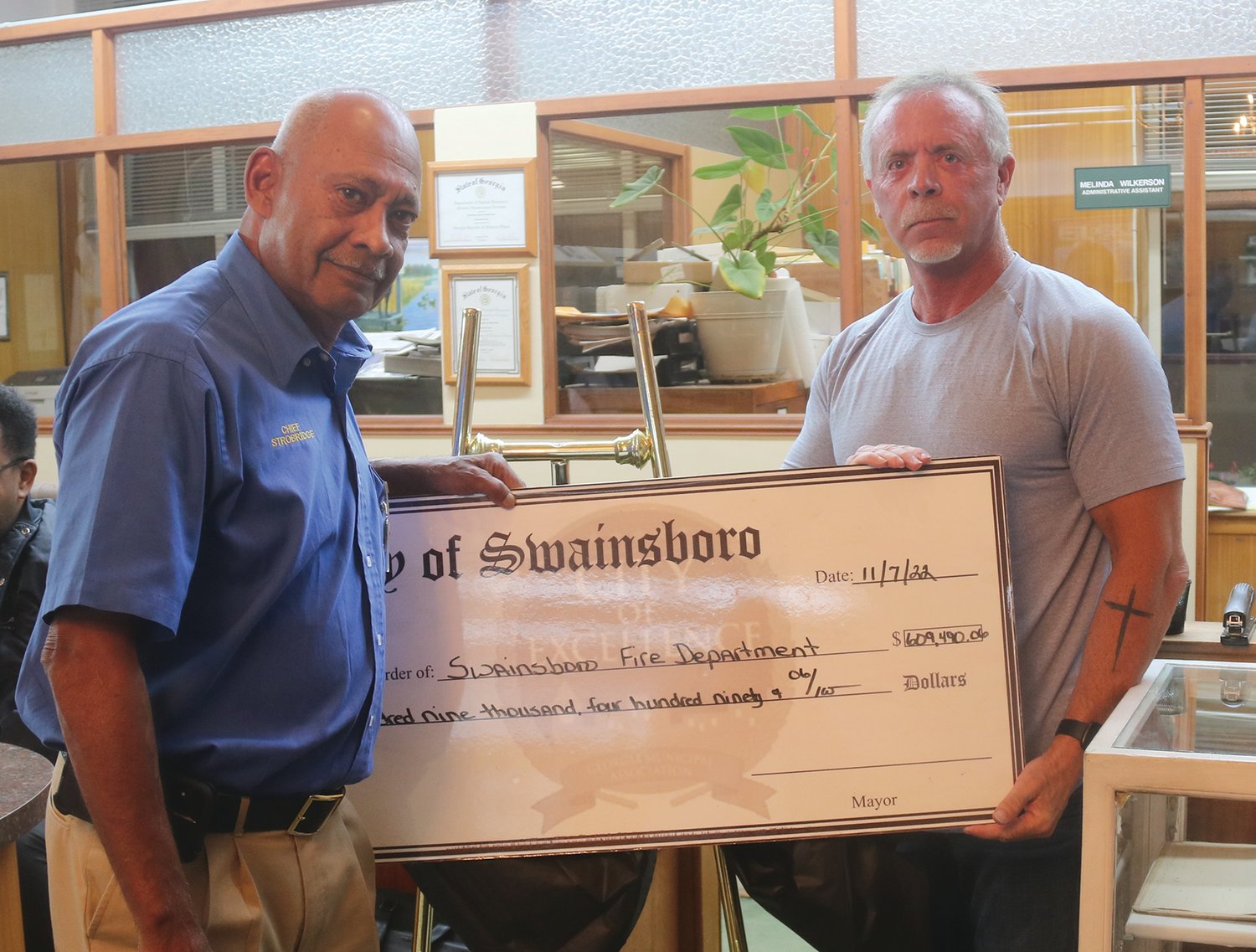 Strobridge and Bennett with check 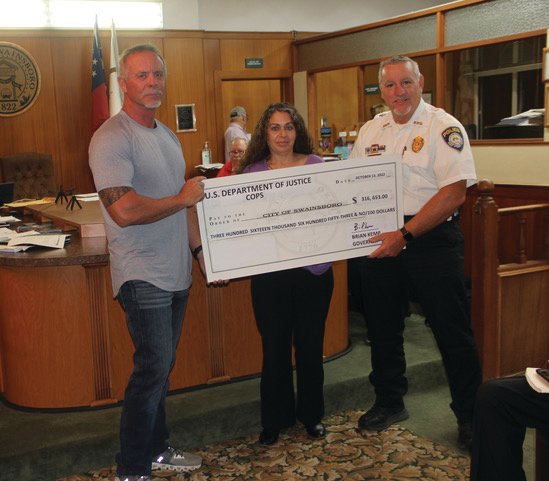 Ellison and Bennett with check
Previous Next
Posted Wednesday, November 9, 2022 5:00 am

The Swainsboro City Council held their regular monthly meeting Monday night, November 7 with the mayor and all council members present. Chief Randy Ellison gave the invocation, followed by the Pledge of Allegiance.

Minutes for the October 3 and October 24 meetings were approved with amendments for Michael Bright and Julian Sconyers being added to the agenda.

LMIG projects for 2021 and 2022 were discussed. Mayor Bennett informed council that street paving in the city would begin on or before November 14. The names of all the streets to be paved was not available.

John McClellan with Turnipseed Engineers presented a letter of recommendation to council to replace elevated tanks in the city. According to Mr. McClellan the EPD made an earlier inspection of the current tanks and said they did not meet standards. The proposal was to replace a 100,000 and a 75,000 gallon tank with one 500,000 gallon tank. The cost of the replacement would be $2,387,248. The city received a $500,000 grant earlier to aid in the cost of the replacement of the tanks. Council voted to table the project until March of 2023.

Stanley Wimberly and Willie Harden with Men Reaching Men Outreach addressed council to invite the city be a part of the Prayer Vigil to be held on November 19 at 1 p.m. at the Swainsboro Boneyard Pavilion.

Fire Chief Mike Strobridge presented a check to council for $609,490. Prior to the presentation, Strobridge told council he would be a 50 year employee of the fire department in January of 2023. “I would like to thank the mayor and council for all the support through the years”, stated Strobridge. He also informed council that all the full-time fire fighters are not only state but national accredited fire fighters.

Building Inspector Bruce Kirby presented a final plat for Paris Avenue to become a city street. Due to the fact that Mayor Bennett holds an interest in the project, Mayor Pro-tem Collins acted as mayor. Council approved the plat 5-0. Following the approval of the plat, discussion was held regarding the maintenance of the street. A portion of Paris Avenue is in the city and a portion is in the county. According to City Administrator Melissa Kirby and Attorney Jon Levis, the county accepted the final plat to maintain the road with a two-year agreement from the date of execution. Council voted to mimic the county’s agreement 5-0.

Moses Archie addressed council regarding the city code enforcement officer. Archie expressed concern about the way the code enforcement officer handles citations. Richard Claxton was on hand to represent Mr. Archie, along with Shon Corley. Following lengthy discussion, council voted to cease and desist the use of the local ordinance for the ’accumulation of junk’ with Parker making a motion, seconded by Collins. The motion passed 4-2 with Julian Sconyers and DD Davis voting against.

Rita Faulkner addressed council with concerns about the 2023 budget. She stressed her concerns about law suits against the city. She was informed that there are no current law suits against the city. Her next concern was the Theater and Gumlog Gym projects. “I don’t want the Gumlog Gym to get lost in the sauce,” said Faulkner. Mayor Bennett explained that money had been set aside for the projects with ARPA funds.

Next, Police chief Randy Ellison presented a check to council from COPS Hiring Grant in the amount of $316,653. These funds are only to be used for hiring of officers.

The next topic of discussion was the intergovernmental agreement for the airport. Council approved the agreement 6-0.

Michael Bright addressed council requesting an update on how they are planning to fix his property. Council will schedule a Zoom meeting to discuss the matter and get back with Bright.

Finally, Sconyers explained to council that Wreaths Across America will be held in December and the shelter in the city cemetery that was damaged needs to be repaired prior to the event. He also requested the cemetery be clean and pristine.