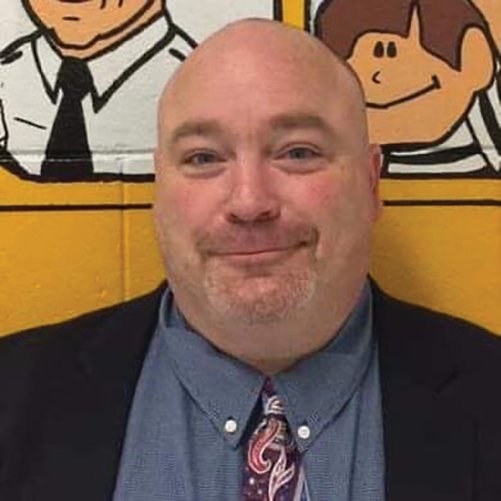 Some teachers come into our lives to teach; others come into our lives to inspire. Motivation to learn isn’t found in the places where pressure is applied but is found in the spaces where others want to be. If a teacher can draw a crowd of students without trying, or constant laughter can be heard through the thick walls of their classroom, ask them what they’re doing right because they are the ones who are leading and inspiring the minds of our future.

There are countless former and current Emanuel County students who, if asked to recall one such educator that embodies these incredible traits, would without a doubt say Mr. Robbie Warnock. Warnock is a local legend of a teacher who has been inspiring Emanuel County's youth for the past 25 years. Like Gandalf said, “All we have to decide is what to do with the time that is given to us,” and for over two decades, Warnock has dedicated his time to embolden the intelligence of the children in our communities through humor and heart.

Born to Robert and Rosemary Warnock, Robbie Warnock was raised in the small community of Oak Park. After graduating from Swainsboro High School in 1993, he attended East Georgia State College or as he described it; "The best college ever!”, where he obtained his Associates Degree before going on to graduate from Georgia Southern University in 1997. Although Warnock had received the necessary requirements to become a teacher, he had to wait for the right position to come along before the next chapter of his life could begin, so he acquired a job at Statesboro Walmart. It was during this time of patience that his stars aligned, and his greatest journey began. While waiting and working at Walmart, he met the love of his life Lisa Myers and was later approached by Marion Shaw who offered him the opportunity to come back home and teach English for his Alma Mater, Swainsboro High School.

By 1999, Warnock had gained the titles of husband and teacher - adding to his family tenfold.

"I grew up in a family of teachers.” Warnock began to explain, “My dad has always been a major inspiration for me with his combination of intelligence and humor. Lots of people remember Ms. Juanita Harrell or her nickname ‘Bip’ who was a long-time educator and one of the matriarchs of our family. When I began my career at Swainsboro High School, my dad, and later Mr. Von Johnson, kept talking to me about going into leadership, I think they double-teamed me,” He said with a laugh before continuing, “so I got my master’s degree in Educational Leadership and taught half day and did admin work the other half for a year.”

Taking his idol's advice, a step further, Warnock became a full-time Assistant Principal at SHS until he and Lisa received the sweetest news that they were expecting a baby boy. While the young couple were excitedly anticipating the arrival of their first born, Warnock was also struggling with learning how to balance being a new father while also wearing so many hats in his career. Then an Assistant Principal position opened at Swainsboro Elementary School and Warnock knew that it was where he was meant to be:

“I got the awesome chance to go work with my former 6th grade teacher, Mrs. Syvetta Young.” He said with a smile. “I had three years at The Best School on Tiger Trail before I spent some time at Swainsboro Middle leading up a program called 8.5 with another year at SHS as Assistant Principal over testing and instruction before I applied for the Assistant Principal position at Twin City Elementary. I was later named principal at Twin City Elementary right before the pandemic started and I have been here ever since!”

Mr. Warnock's inspiration for education was brought about by not only his family's history but also by his former teachers: "So many Emanuel County teachers have built me into the educator that I am today.” He said before continuing, “My kindergarten teacher, Mrs. Beulah Fulford, gave me a love of reading in front of a group of students. Mrs. Debbie Powell taught me the first math lessons I remember. When Oak Park Elementary was folded into Swainsboro Primary and Swainsboro Elementary, Mrs. Helen Harper and Mrs. Miriam Fagler welcomed all the new kids right into the fold of the ‘city kids’ and made us feel welcome. My teachers through 4th and 7th grade at the Gumlog school gave me the happiest years of my school career. Mr. Jenkins showed us that teachers could teach and still be cool. In Mrs. Young’s English class, I met JRR Tolkien. Her introduction of fantasy literature was one of the most formative parts of my intellectual life. Mrs. Margaret Ashcroft and Mrs. Mary Clyborne at SHS totally committed me to literature. I will never be able to thank Mrs. Fay Flanders enough for the love she gave me for science."

No one ever doubts that teaching is a challenging profession, often the most difficult parts are not in the lesson plans but in the interpersonal interactions. Mr. Warnock laments in his personal experience, by explaining that it’s difficult to be a classroom teacher because teachers tend to be the adults that students spend the most time around other than their parents. “I spend as much time with other peoples’ children as my own.” He explained, “That means that teachers have to not only educate students in a subject area, but they also have to act as parental figures, too."

Now as a Principal, Mr. Warnock has taken this knowledge and contributed it to the atmosphere that he leads throughout. He is currently working diligently with his team to convert Twin City Elementary from ‘schoolhouse’ to ‘school home’ to ensure that TCE is always a comfortable and safe place to learn and play:

“My staff truly considers every student who comes through our door to be our kids. When a student walks into a classroom at TCE, I know that student is going to be loved and taken care of, nurtured, and educated. I cannot count the number of conversations that teachers have had with me that shows just how far they go above and beyond what their job descriptions say. We may not get everything right, but your babies are safe and taken care of while they are with us!"

In his downtime, Warnock enjoys reading, gaming, and watching his two children, Robert and Ava Lane, thrive and compete in their athletics and extracurriculars which include basketball, soccer, and 4-H. He also added that he appreciates collecting and reminiscing on all things that the greatest decade had to offer. “A large part of my brain is hardwired into the 80s, so anything that falls into that nostalgia period is awesome!”

From a former student of Mr. Warnock’s to the writer that I am today, thank you for your tireless effort and helping me find my way at a time when things seemed pretty dark in my personal education journey. Keep doing what you do, you are changing lives one at a time. Collectively from all of us you've touched, Thank you, Mr. Warnock!

“Even the smallest person can change the course of the future.” - J.R.R. Tolkien

Now that you’ve met the teacher and heard his story, read his Q/A’s below to further understand Principal Warnock’s incredible values of teaching and how he’s changing and inspiring young lives in our community.

What do you find most rewarding in your career?

Warnock: This career is full of rewards. The single most rewarding thing? The sheer number of former students of mine that are now teaching. I know that what Emanuel County Schools is doing works when so many of our alumni come back to take care of our kids.

Do you feel that each of your students have left a lasting impression on you?

Warnock: When teaching is a one-way street, it fails. I feel that I learn as much from my students as they do from me. I am a good parent because I have worked with students the same age as my own children. Each interaction with a student makes me a better educator, a better parent, and a better person.

What advice would you like to give to new or upcoming educators?

Warnock: New teachers, read the answer before this one and then let me tell you a secret. Those lesson plans and stuff your university folks drill into your head? Those things do not drive your life or career at all. When your first period class walks in and something bad has happened in the community or the news has them upset, you are going to have to trash that lesson plan and tend to your flock. Don’t let the media taint your mission. Hang in there. Find out which fellow teachers suck on a persimmon before they clock in and avoid them. Listen to your students and give them what they need. It may not be something on the lesson plan. Build your whole educational platform on two words: Do right.

How does it make you feel to see the success that many of your previous students have become?

Warnock: It is the best thing in the world. It is like watching your own child take his first steps over and over again. I walked out of a former student’s classroom one time and thought She did that WAAAAY better than I could have done. That is pure awesomeness.

If you could tell your past students or future students one thing that you hope will stick with them all throughout life, what would that be?

Warnock: Above all things, do right. You are human, so when you don’t do right, do your best to make it right.

Warnock: Forgive me for the sentence fragments. So many good ones. When a student looked up and said “Hey, I didn’t know there was a chair behind your desk!” When I drop the final word of a lecture and a student says “Whoa….” When a former student publishes his first book, when one makes a career teaching Latin, when two previous students introduce you to their new child. I can’t count the times a former student has thanked me for being their teacher. When that student who could argue the horns off a billy goat has a major career as a lawyer. Teaching is the best job in the world, and these memories just keep that fire burning.