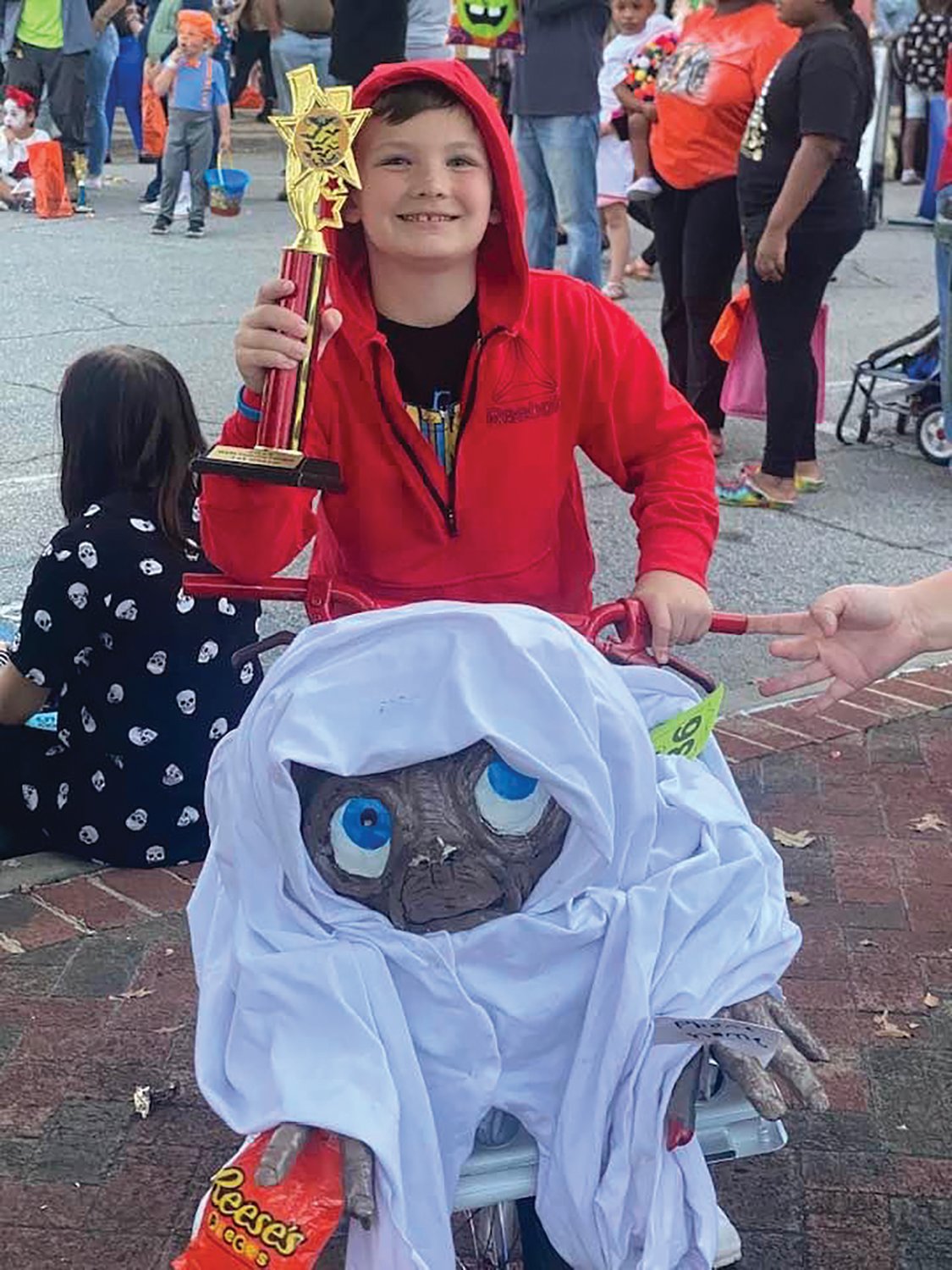 RYDER WITH HIS 1ST PLACE TROPHY AT SWAINSBORO’S FALL FESTIVAL 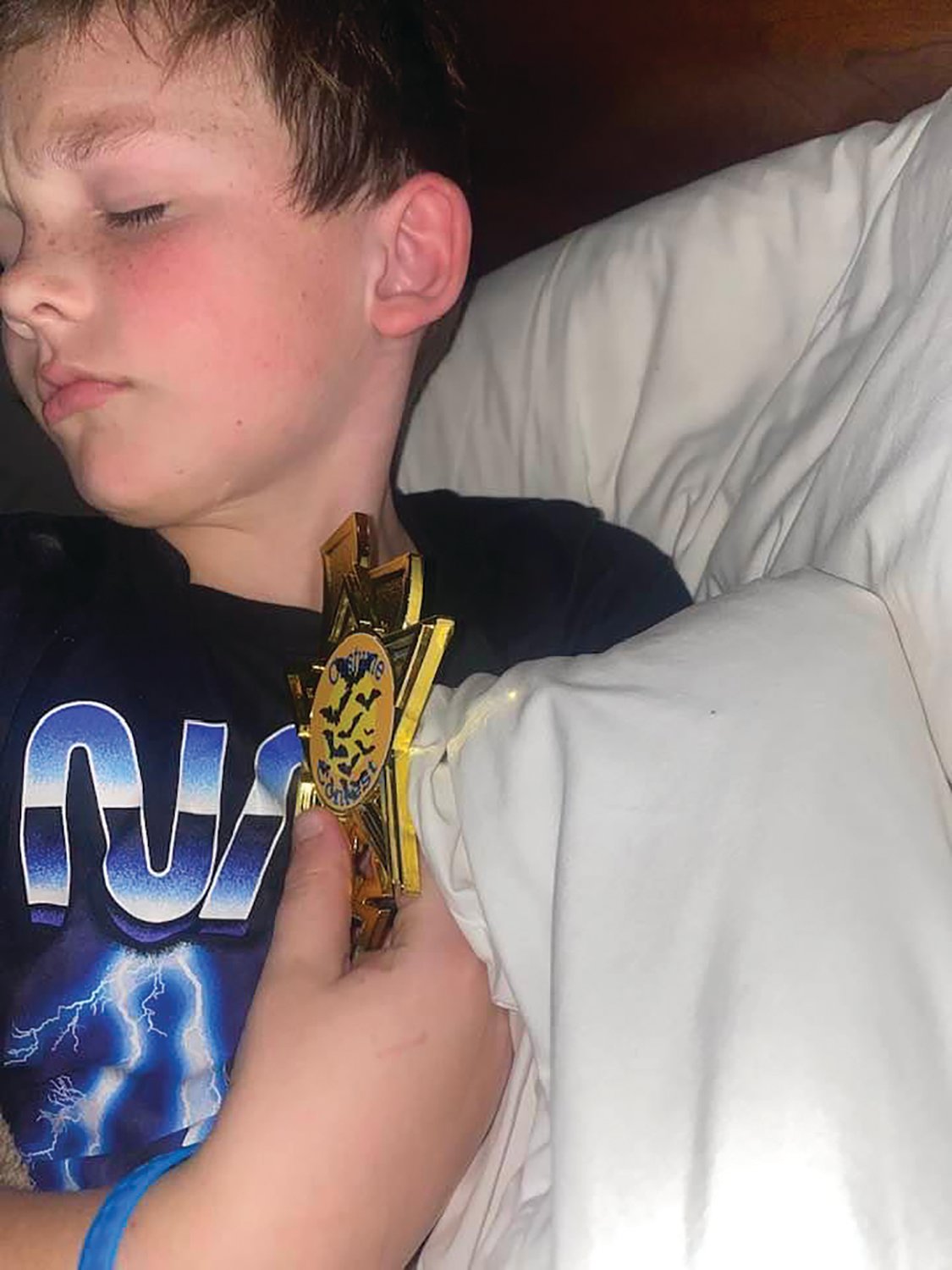 A SLEEPING RYDER WITH HIS 1ST PLACE TROPHY 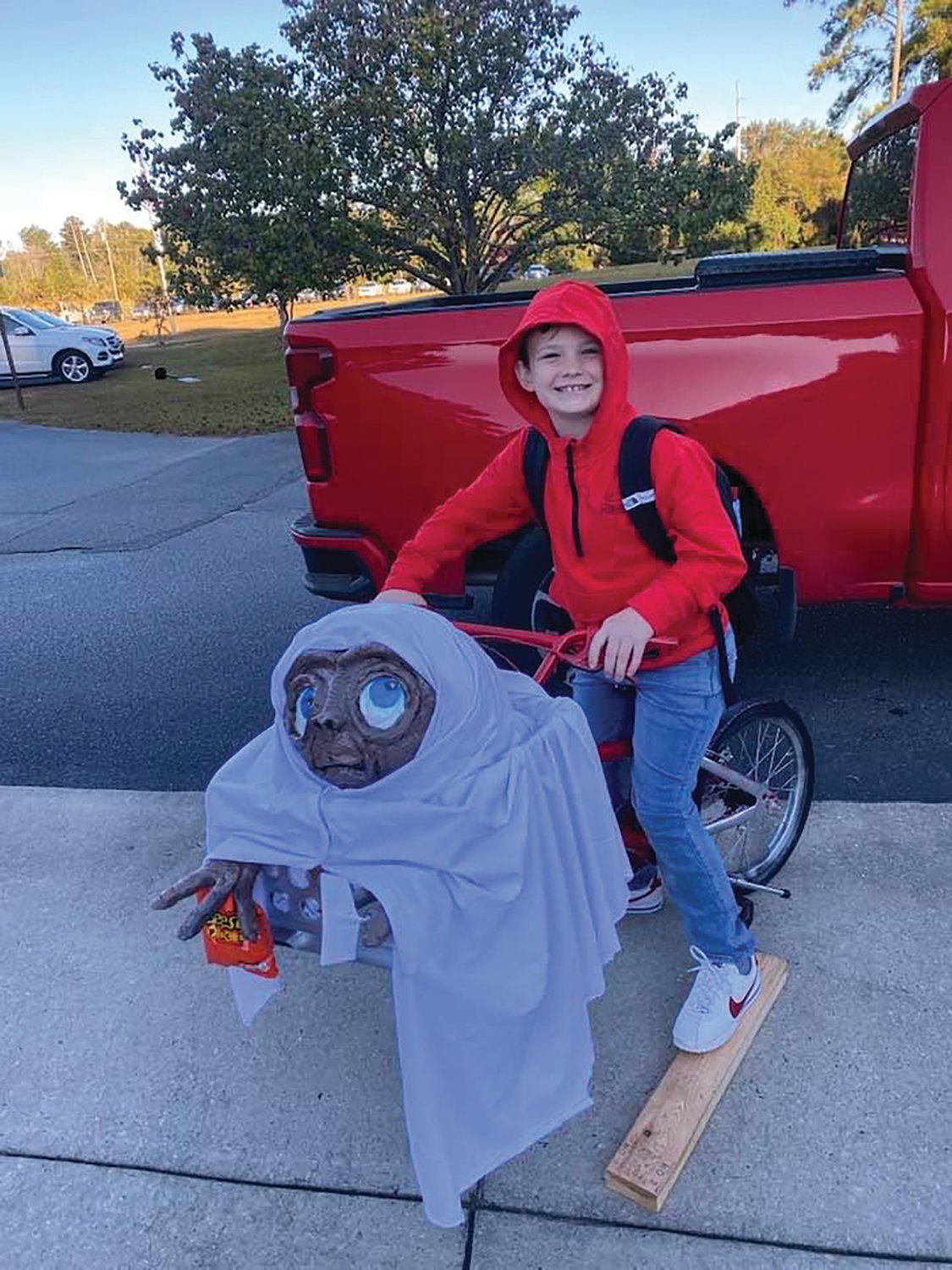 RYDER AS ELLIOT WITH HIS E.T. PUMPKIN
Previous Next
Posted Monday, November 7, 2022 5:00 am
Brittany Hall

Just as Linus from Charlie Brown anticipated the sight of the Great Pumpkin, some of us just can’t wait for Halloween to return every year, or National Pumpkin Day which is celebrated on October 26. Although Halloween is over and National Pumpkin Day has passed, there’s someone deserving of the spotlight for his nostalgic creativity and out-of-this-world imagination that he implemented into this most recent season, reminding us all of what it is to be a kid and why these holidays should be embraced for that.

Ryder Tharpe is a seven-year-old, first-grade student, who attends Twin City Elementary. He aspires to be an astronaut when he grows up so he can see outer space and study how gravity affects things on earth. He also shines through his love of the arts.

“I love art and science. I love to do experiments too!” He explained.

Recently, Tharpe participated in a school-wide pumpkin decorating contest where he was awarded first place for his epic design of E.T., a project that he envisioned and constructed, all on his own.

“When my mama said, ‘Hey Ryder, do you want to do the pumpkin contest at your school?’ I said, ‘I’m doing it!’ I was super excited because I had never done a contest before and I knew what I was going to do right then! My family gave me some other themes, but I wanted to go with my idea.” The seven-year-old excitedly explained.

Tharpe said that the inspiration came to him by happenstance, and only a few days after he had watched the movie. He was motivated by the friendship Elliot and E.T. shared and even noticed a resemblance between himself and the protagonist:

“The movie was fresh on my mind, and I knew I already had an old blue bike and the shoes just like Elliot wore in the movie. I really liked the movie because Elliot kept the scientists from doing a lobotomy on E.T.  and because my mother and father watched it when they were kids, and I like to see how things looked back then! When I watch movies, sometimes I pretend that I am the character. I kind of look like Elliot, we both got brown hair and freckles.” He said with a smile.

Tharpe began his creation by using a pumpkin that he picked out at Wal-Mart. Utilizing his originality and out-of-the-box thinking, he then told his “mama” that he wanted to use air dry clay to sculpt the face, innovating a new way to decorate pumpkins.

“My mama was like, ‘Ryder we can’t do that, we can’t sculpt!’ But I told her that we can do anything if we try hard enough or if we watch a YouTube video!” He said with a laugh.

Tharpe tackled the most detailed portions of the project first, E.T. 's forehead and eyes, after that he said that it all started coming together.

“My mama said, ‘Wow… That does look like E.T.!’  The nose was the hard part, it took me one hundred tries to get it right! I used my pocketknife to make the wrinkles, then I had to let the clay dry for two days so I started painting the bike red with spray paint to make it look like Elliot’s.” He stated.

After everything was dry, Tharpe began painting the face and attached the basket to the bike with zip ties. He waited until the last minute to put E.T. in the basket to avoid any problems but said that he still faced many, however it was nothing that his determination and incredible problem-solving skills couldn't handle.

“He wasn’t tall enough, so we had to put him in a flowerpot to lift him up. Then we put foam and newspaper around him and then wrapped some brown medical tape around him, so he was more stable. Next, I put a white sheet around his head and my Nana pinned it. I used some gorilla hands from an old costume but tucked in the thumbs because E.T. only has four fingers. I stapled the Reese’s in one hand the Phone Home sign in the other one and painted the tip of his finger red! I was finally done but I was a little late to school that day!” He said through a giggle.

The project took his entire fall-break to complete, but Tharpe says that the outcome made the difficulties and round-the-clock effort completely worth it.

“I knew I had to go all out if I wanted to have a chance of winning against those fifth graders! I already had the shoes and jeans, I figured if I dressed like Elliot, it might increase my chances of winning and it worked!” He said with a smile before continuing, “It was all my idea and I did a lot of it, like painting, forming the clay, using my pocketknife but I had help, I’m just a kid with a good imagination, I couldn’t have done it all by myself!”

The costume and pumpkin were a replica of the legendary duo, from Tharpe’s scarlet hoodie to his red and white sneakers to his old blue bike that he spray painted red to resemble the iconic BMX that Elliot flew across the moon. He even went a detailed touch farther by adding a milk crate basket to the front where a blanket covered E.T. rode comfortably in style while holding tight to his most-favorite earth craving, Reese’s Pieces.

“He worked so hard and came up with this idea all on his own.” Tharpe’s mother, Rhaney Starling, explained, “He was prepared from the very beginning and told me that he would “sculpt” E.T. 's face, using clay. I was like, ‘I don’t know if we can pull that off.’ But Ryder assured me that we can do anything if we try hard enough. He said, ‘I’ll be competing with fifth-graders, so it’s got to be really good!’” Starling said as she laughed, remembering that moment. “Then he decided to paint an old blue bike red and dress like Elliot down to the shoes! He was so proud of himself, and we were all amazed at how good it turned out!”

Ryder took home the win but most of all enjoyed sharing the fun of creativity with his peers.

“When I heard my name over the intercom, I was like OH YES! I was smiling so big, and my face turned blood red!” He explained through a bright smile.

He later shared this same excitement with his community by participating in Swainsboro’s annual Fall Festival costume contest that was held on Tuesday, October 25, where he won first place in his division, for a second time. This was a significant moment for young Tharpe that his mother captured and shared on Facebook through memorable pictures that displayed sweet Ryder with a big smile, holding tight to his well-earned trophy until he fell asleep with it in his arms.

“I definitely did not expect to win that too, because I saw so many good costumes, but I was so surprised and happy! I loved my trophy so much that I actually slept with it! I also won Wild Adventure Tickets and I’m not exactly sure what Wild Adventure’s is, but I can’t wait to check it out!” He said in conclusion.

Tharpe doesn’t limit his creativity to the classroom but instead gives his imagination room to grow so that it can bloom into amazing things. When asked if he feels like creativity can change the world, the wise seven-year-old shared some insightful words that we could all take a lesson from:

“My project wasn’t easy, but I did it anyway! I want everyone to remember that even if something seems hard, don’t be afraid to try! Creative minds have always been the ones to change the world!”

Keep dreaming big Ryder Tharpe because you’re an inspiration to our community and there’s no doubt that you’re going to change the world someday. We hope you have the best time at Wild Adventures, buddy!

“Without leaps of imagination or dreaming, we lose the excitement of possibilities. Dreaming, after all is a form of planning.” ― Gloria Steinem