Not only a standout but a legend 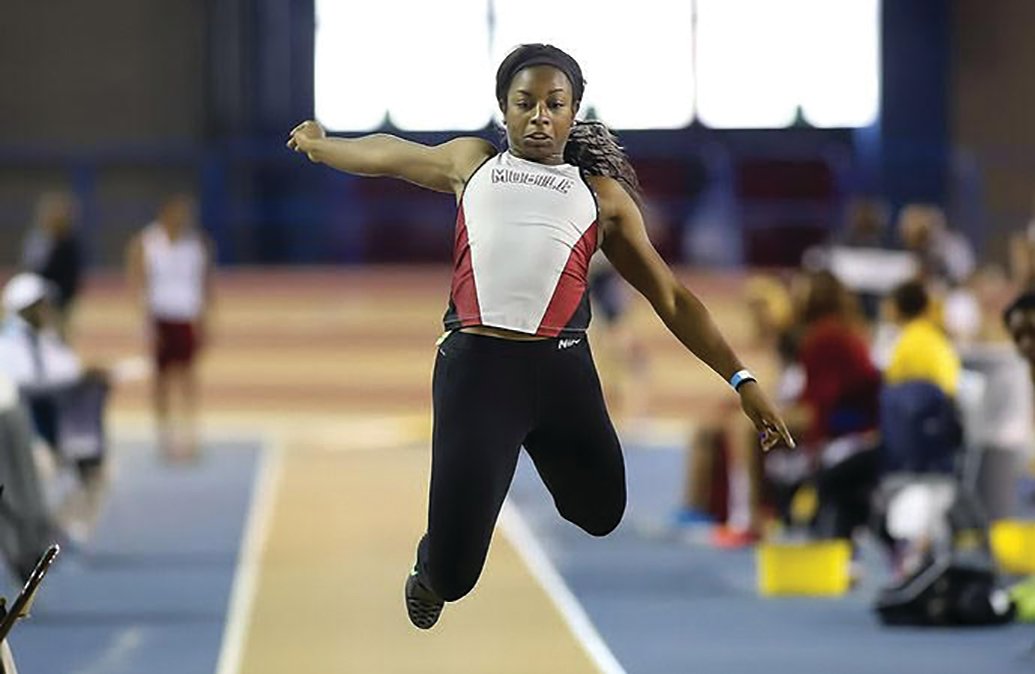 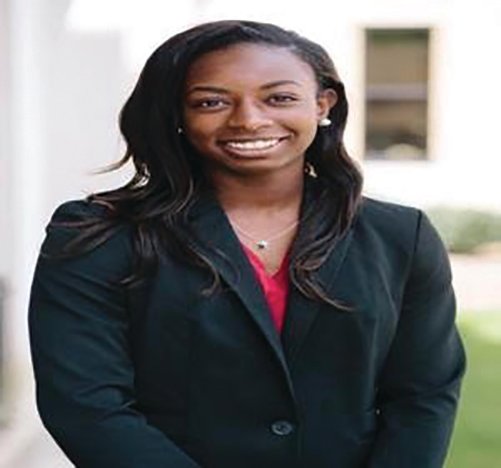 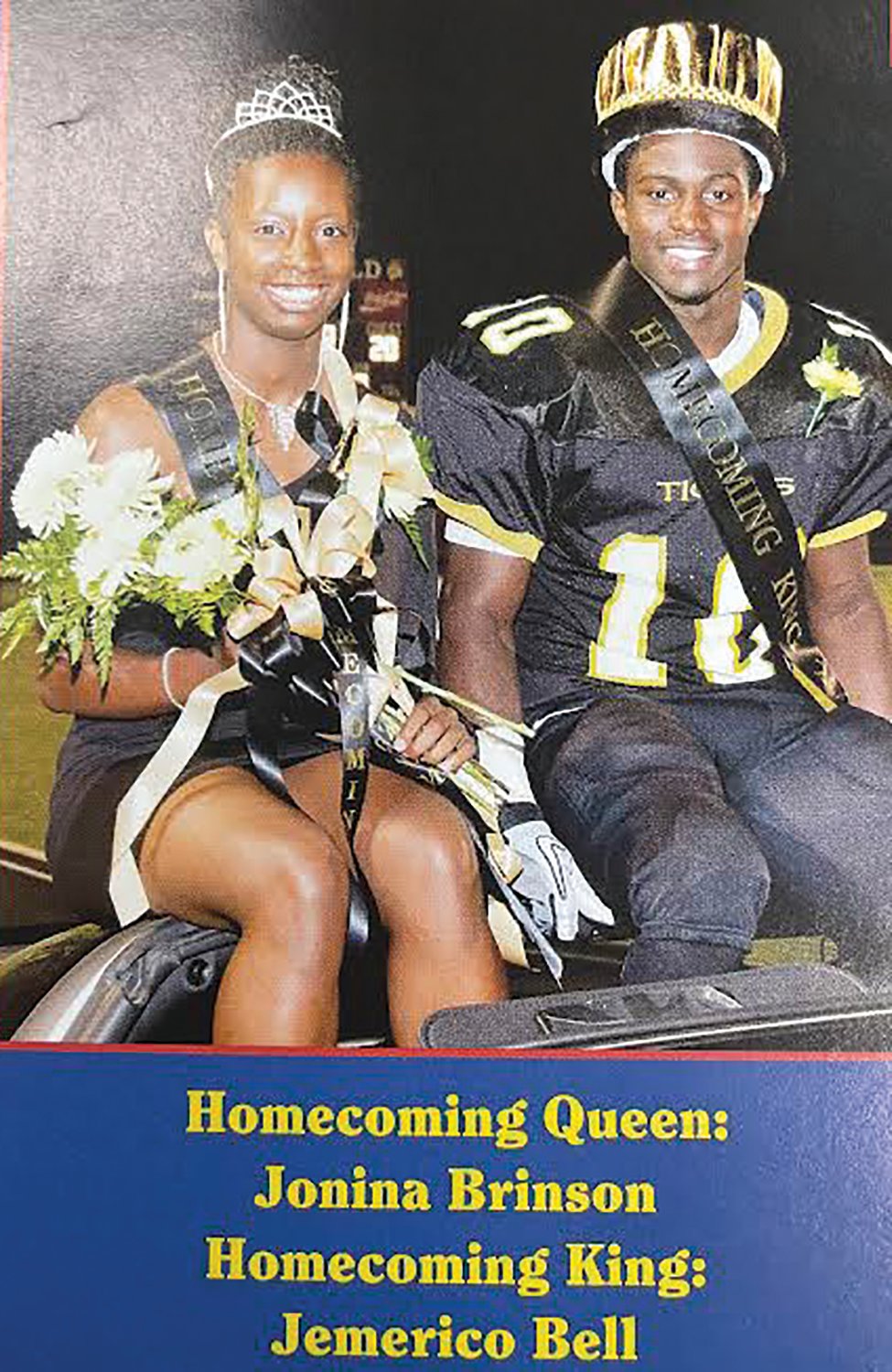 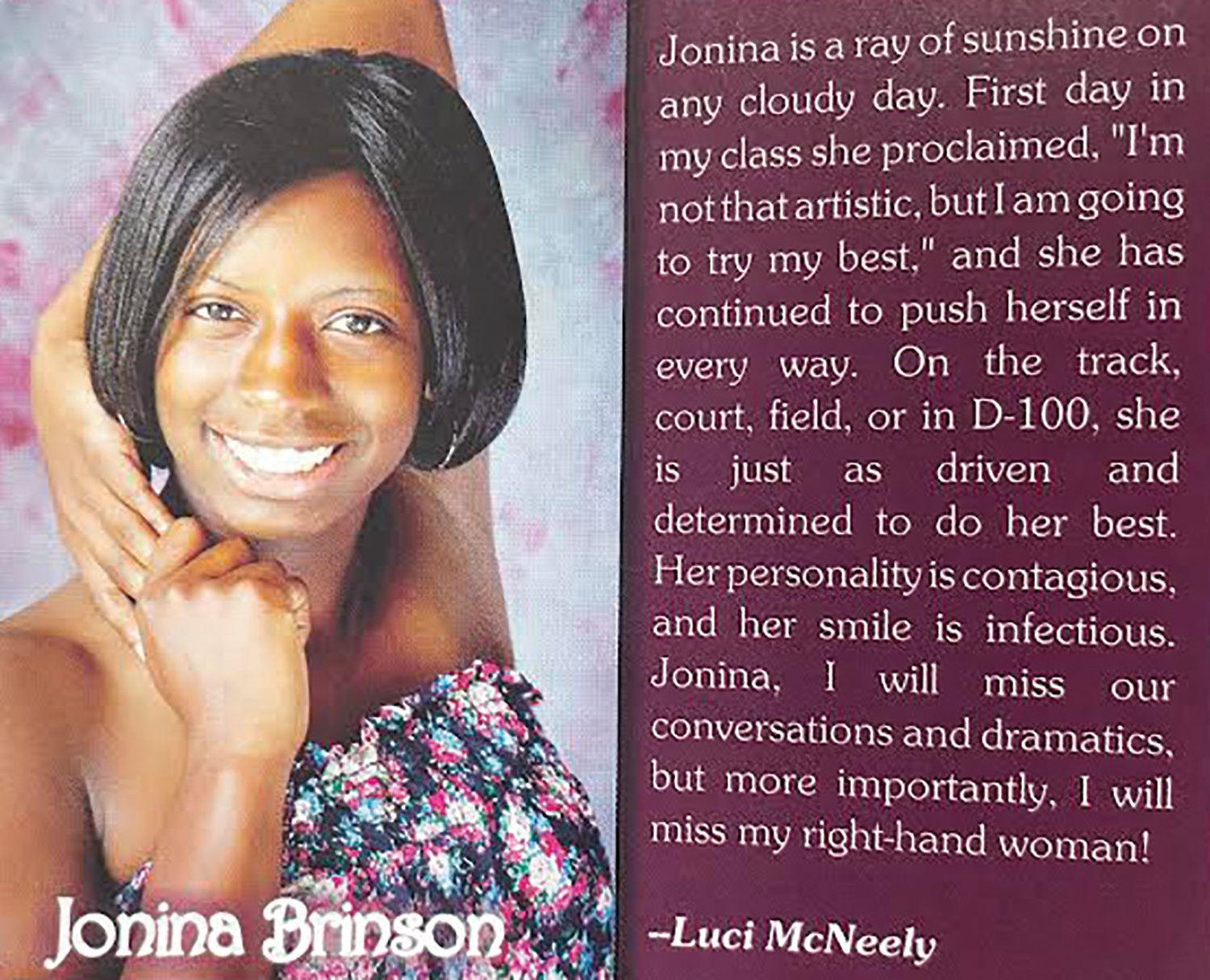 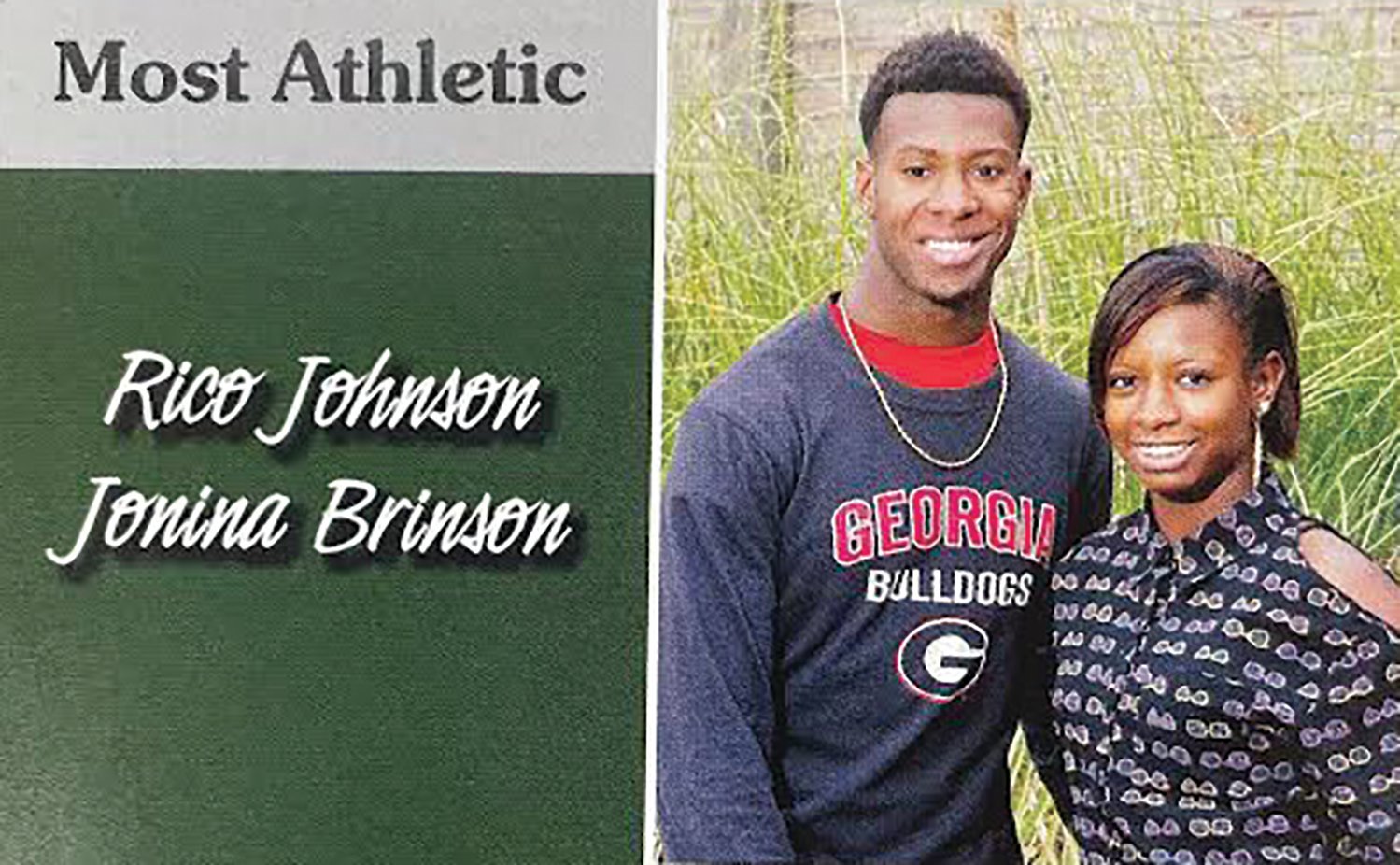 If you flip through the yearbook of Swainsboro High School’s class of 2013, you’ll come across the beautiful face of Jonina Brinson several times. Her name is written throughout its pages as a graduate, homecoming queen, senior superlative, MVP, most improved, honor student, and the only female of the class of 2013 who was voted as most athletic overall as she participated in volleyball, softball, basketball, tennis, track, and field and was known for the Triple Jump Record and 100-meter Dash Record that she set during her time there. Although an astonishing athlete of the full spectrum, it was during her senior year that Brinson knew Track and Field was the sport she was meant to pursue. While each title and recognition she received in high school perfectly reflected her vibrance of soul, spirit and skill, Brinson has lived up to and exceeded those achievements and expectations, almost a decade later.

“I learned a lot of life lessons in Track and Field, including self-motivation. It’s a sport that will expose you if you don’t put in the work and you’ll have no one to blame but yourself. So, I knew I had a lot I could learn from it, and I also knew that I could travel for free if I did well.” She said as she laughed.

Today she’s still known as an all-star athlete who has been gracing track and field since her time as a student at Swainsboro High School, but the titles that she’s attained after graduating is where her star blazing trail began to set the world on fire. After graduating in 2013, Brinson attended the University of Mobile where she obtained her Bachelor of Science and Psychology degree in 2017. During her time as a Ram, she also made the Dean’s List, and was an impressive 10-time NAIA All-American, while earning two NAIA Women’s Track and Field National Championships in the long jump. Additionally, Brinson claimed two SSAC Women’s Track and Field Athlete of the Year honors, earning the conference’s track athlete of the year honor in 2016 and the field athlete of the year award in 2017. She also broke 11 total indoor and outdoor track and field school records.  Although her determination never appeared broken, while she was going down in history, Brinson was also quietly experiencing the most difficult time of her life.

“The year that I became the 2016 Indoor Long Jump National Champion… that year was by far the hardest year mentally for me.” Brinson explained through tearful eyes, “I had lost my grandmother in November 2015, I was eight hours from home and missing my family. I really did not want to finish track. I wanted to move back home and be with my family.”

But, as if her grandmother was guiding and reminding her from above, ‘that what doesn’t challenge you, doesn’t change you,’ Brinson remained steadfast and strong, putting forth a continuous effort of persistence and determination that completely paid off and is a testament to who she is today.

“My parents and Coach Andy really helped me through that time. My parents called every day with encouraging words and Coach Andy made time to chat each day to help me clear my head and get through practice. That indoor season I was ranked Top Five in four events and came out on top in the Long Jump and All-American in Long Jump, Triple Jump and 60-meter dash,” she explained.

The following year, Brinson joined the exceptional Bethune-Cookman University’s track and field program in Daytona. While there, she was named the Mid-Eastern Atlantic Conference Field Athlete of the Year of 2018 and was also an NCAA qualifier. After completing her athletic career at Bethune-Cookman, she stayed on as a graduate assistant coach for the jumps and multi events where she worked alongside Coach Donald Cooper and Coach Tyree. It was during this time that her goals took a turn, and a new passion was instilled within her.

After completing two years as a Graduate-Assistant Coach, Brinson began applying to different universities for an Assistant Track and Field Coaching position and in 2020, she received the opportunity to become the Assistant Cross Country Track and Field Coach at Buena Vista University in Iowa. Shining in this position, Brinson earned the M-E-L-T (Multicultural Engagement Leadership Team) award and became Staff Member of the Year of 2020 before being promoted to Head Track and Field Coach of Buena Vista University on April 1, 2021. It was during her time in this position that history was made, two years in a row.

“The women’s track and field team placed fourth in the outdoor conference which was the highest it had been since 2016. Seventeen male athletes made BVU’s all-time top-ten list as well as twenty-two women and three athletes were named as Midwest All-Region athletes.” She explained as her face lit up with excitement, “We also had eighteen All-Conference Performances, four Conference Champs, four All-American Finishes, nine USTFCCCA All-Academic Honors, and beat ten school records at Buena Vista University.”

One year later, Brinson moved to Spokane, Washington where she began a new chapter in her illustrious career, and on October 17, she was officially named as an Assistant Coach for the Eastern Washington University Track and Field program in Cheney, Washington, where she continues to create champions. There Brinson oversees the jumpers and multis for the Eagles who will begin the 2022-2023 season. However, the title of Coach holds more meaning than just “trainer” for Brinson. For her, being a mentor to her student athletes is what’s most important.

“One lesson that I’ve taken from my experience as an athlete to now as a coach is to remain open and to be myself fully.” she explained, “I tell my athletes all the time you have me for a lifetime and the best communication is open communication. I get out there with them for practice, whether it’s to demonstrate or run with them for a rep. I leave my door open for conversations and I make myself available for them to pull me to the side and talk about any and everything, so that they will be the best version of themselves.”

Taking inspiration from her memories under the stadium lights, Brinson is contently reminded of the positive and loving influences and idols who motivated her all along the way and gave her the same compassion that she instills into each of her athletes, every day.

“You know, my parents pushed me to continue my sports career and anything I put my mind to, which helped fuel my passion. But one person who helped me see the connection in advocating for student athletes as well as coaching was my Collegiate Coach, Andy Canegitta. He was the one coach that revealed that he wasn’t just going to help me run faster or jump farther, but that he was going to be there for me every step of the way.”

Brinson thoroughly spoke further in appreciation of those who have supported her throughout this journey, adding that without these amazing people, none of her dreams or plans would have ever made it to fruition.

“It took a village with me. If I tried to name each person who’s supported me since the beginning, I would not have enough time. The Cross-Green community, my family, my coaches, my pastor, my church family, my teachers, friends, and teammates... I want to thank each and every one of you for how much you have poured into me. The continuous support and words of encouragement are greatly appreciated, and forever cherished.”

She also shared some sweet words for her biggest fans and recalled a favorite memory that she got to share with them during one of the greatest moments of her life:

“The fact that my parents get to be with me every step of the way is so special. In fact, when I won Nationals, they were right in the stands cheering with my niece Novi. I love how in every chapter of my life I could call and brainstorm ideas and thoughts with them. I can invite them to come visit me and talk to them about what’s going on.”

Brinson also wanted to add that she’s so thankful for the support of her brothers, Asa and Archie Junior, and the love that her church family, Piney Grove Missionary Baptist Church, has shown her from the moment she became a member. In addition to these incredible people, she said that the class of 2013 will always have a special place in her heart, and she’ll continue to make the most of the skills that she obtained as a Tiger.

“So far, I’ve reached about three goals that my younger self set. I still have a few more to check off the list. This next chapter in my journey is to continue sharing the gift God has given me and to continue to motivate, inspire, and develop students into amazing young adults and athletes,” She said, regarding the future.

Although Brinson has earned her stripes she never forgets where she comes from. When she isn’t breaking records, she’s riding her bike, listening to the songs that she and her father enjoyed together, working out and traveling. Among her many brilliant talents Brinson is also a prodigy of the keys and was the pianist for her hometown church when she was a child.

“It feels amazing you know - to be in the field you love, having an impact each day. It’s amazing.” She concluded with a bright smile.

Today, you don’t need a yearbook to know who Jonina Brinson is because she’s a renowned athlete who is known for her talent all over the country. If you search for her on Google, every photo and link that’s provided after is another phenomenal mention about the astounding athlete, scholar, and coach that she is, proving to the world that greatness is a matter of conscious choice and discipline, and that Brinson is not only a standout but a legend.