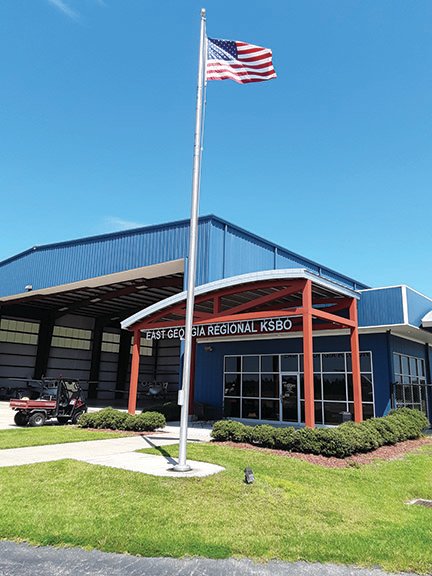 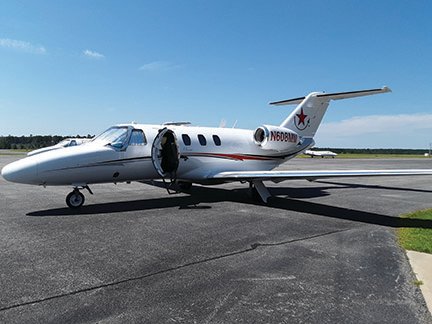 If you just want a little get-away, and you feel the need for speed, there’s a solution right here in town. Just go talk to the folks at Airstar and tell them where you need to go. Then settle into one of the sumptuous leather chairs in the East Georgia Regional Airport terminal building, and your flight will leave, well, whenever you want it to leave. As long as it’s within a 1,000-mile range, you can be there in a little over two hours. That puts you in New York City or Chicago or Dallas. Boston or Montego Bay, Jamaica is 20 minutes more. But you get the idea. As you might imagine, travel this convenient and quick is not cheap, but if the circumstances require it, then it’s there for you, business or pleasure.

In case you haven’t noticed lately, things have changed quite a bit at our airport. In 1942, the Emanuel County Airport consisted of a dirt runway and a tin shed. In the sixties, sparse paving, two open hangers and a small square brick office building were all that occupied the entire airport area. Today, a 12,000 square foot community hanger, a 3,000 square foot terminal building with conference room, pilot’s lounge, flight planning and passenger waiting area, a T-hanger complex, a 14,000 square foot maintenance hanger, 250,000 square feet of paved apron with tiedowns and helipads and the 13th longest runway facility in Georgia make up what is now known as East Georgia Regional Airport (EGRA). The official Federal Aviation Authority identifier of the airport is KSBO as it has always been. But now the facility is also now widely as the “nicest airport for a town its size in the state of Georgia.” A former Mayor referred to it as the jewel in the crown of this community. It’s a remarkable story and even more so because nearly all of the multimillion-dollar investment in this airport came from state and federal funds. Long-time Airport Authority Chairman Ken Warnock steered a combined funding effort of numerous government agencies to create what one Georgia Governor called “about the best deal I have ever seen for getting the most out of a government dollar.”

Recently, East Georgia Regional Airport has become home base for the charter flight service operated by Airstar. The company uses 5 Citation Jets with a team of 12 pilots and 8 support staff. Airstar/Airstar Flight Support and its CEO Robert Barker also provide the highest level of professional FBO (fixed base operator) services for East Georgia Regional Airport serving between 16 to 18 aircraft based at EGRA as well as a full-line maintenance facility serving aircraft from near and far. Several agricultural companies operate seasonal activities from the airport and overnight freight operations for the local UPS terminal are supported there as well. The link between this airport and the local economy continues to prove that having infrastructure in place is the ticket to future growth. In a study done by the Georgia Department of Transportation, the economic impact of our airport and aviation related operations to this community is nearly $8 million yearly. Transportation is already a crucial component of our economy. It will only become more and more vital to business and industry in the future. Warnock added, “East Georgia Regional Airport (KSBO) is as necessary to our community and its economic vitality as U.S.1, U.S. 80, or I-16. This facility is responsible for over 1,500 jobs locating here over the past two decades. EGRA is our point of access to the rest of the world through transportation by air. Medical transport, UPS cargo, agricultural operations, charter flights, and support of the entire industrial community here generate millions of dollars in commercial benefit to our local economy.”

The history of this publicly owned facility has been a story of starts and stops. It is evident now that East Georgia Regional has entered a new and vigorous phase. With continued support from the public and our local government, there is no limit to where this “crown jewel” may climb. Many of our industrial employers operating here today formed their first impression of our community when they stepped out of an airplane onto the tarmac at what 80 years ago was a dusty little airport with a tin shed for a terminal. Thank goodness for progress and the people who saw the need and made it happen.