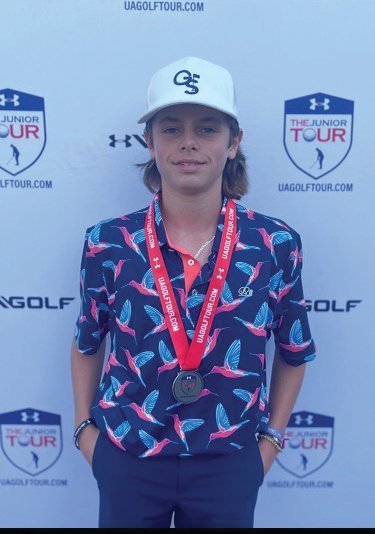 Many people know who Scottie Scheffler is by now. He’s the number one golfer in the world who earned the champion title of the 2022 Masters Tournament back in April. While Scottie has acquired his green jacket, there’s one young local who is well on his way to obtaining his and becoming the next pro. He is 14-year-old Cooper Riner, a young man who has recently blazed a three month trail on courses all around the state culminating in earning the required points to earn a spot on the tee sheet at the PGA Summer Nationals. One talented junior golfer will be crowned champion of the 2022 Under Armour Junior Tour.

Cooper, the son of Bridget and Chesley Dixon and Kris and JoAnna Riner has been traveling all over the state of Georgia since March where his drive for a national title has taken him to four different golf courses. During this time, Riner has placed third or better in every outing, including one overall win, two second-place finishes, and one third-place finish. Each incredible score and final placement against his opponents, throughout the duration of these matches, earned him a place at Nationals in West Palm Beach Gardens, Florida. However, the score that ultimately sealed his name on the roster was the ineffable performance that he delivered at the tour opener at Osprey Cove Golf Course in Saint Mary’s on March 27. It was a mixture of destiny, inspiration and pure magic for the teen, as he shot an average score of 43 for the four nine-hole matches.

Cooper will begin his front nine midday, on Saturday June 25, where he will encounter 18-hole challenges that have been a host to some of the greats throughout its legendary existence. Some of which include, the 1983 Ryder Cup, the 1987 PGA Championship, the PGA Tour’s Honda Classic, and the Senior PGA Championship which has been held on the resort's flawless environs for 19 consecutive years in a row.

We know that you’re going to make an impact while on the this fabled course Cooper because you’ve already made the ground shake here at home. We, along with Emanuel County, wish you the best!

You can follow Coopers journey and watch his plays on ‘The Junior Tour Powered By Under Armour” on Facebook.