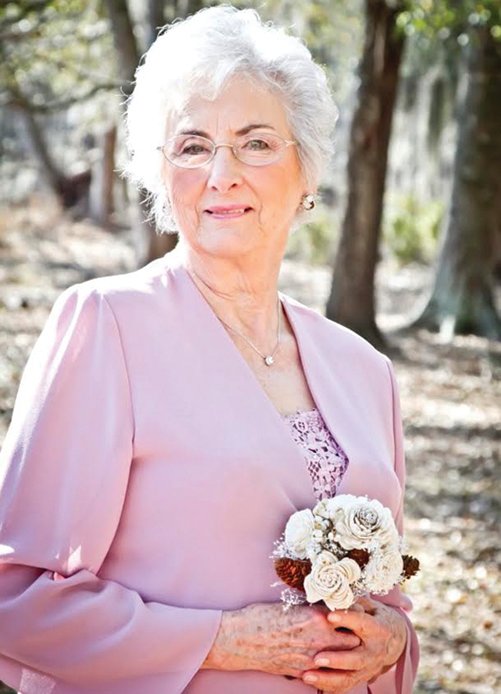 Mary Frances Stroud Singletary, age 88, departed this life on July 30, 2022, surrounded by her loving family. Funeral services were held Monday, August 1, at 11 a.m. from the Chapel of Tomlinson Funeral Home with Elder Paul Thomas officiating. Interment followed in Eastbrook Cemetery. The Family received friends at Tomlinson Funeral Home one hour prior to the service.

Mary was born February 3, 1934, in Swainsboro, to the late Dessie Eugene Stroud and Martha Smith Stroud. She was a member of the first 12th grade class to graduate in Swainsboro in 1952. Following graduation, she completed an apprenticeship in Thomson, and became a beautician. Mary worked for a time as a receptionist at the NCOC in Columbus. She spent most of her working years at the Waller McRae Insurance office, from 1978 until her retirement in 1998. Mary was a member of Swainsboro Primitive Baptist Church where she devoted many years. She was an avid homemaker, and loved baking and sewing. Her favorite pastime was sitting around the table drinking coffee and talking about old times. Mary’s home was always open and people felt welcome. She always called Swainsboro home, but in 1958, she and her husband, Calvin Edward Singletary, Jr., moved to Wertzberg, Germany where he was stationed during the construction of the Berlin Wall. While in Germany, they also traveled to France and Hong Kong. It was during their time in Germany that four of her five children were born. In 1962, the family left Germany and were stationed for three years in Leesville, LA, where her fifth child was born. Not long after in 1965, she moved back home to Swainsboro where she raised her family for the next 50 years. Mrs. Singletary is preceded in death by her parents; son, Calvin Edward Singletary, III; sisters, Dorothy S. Serrian and Alice Thompson; brothers, James P. Stroud and Dessie Eugene Stroud, Jr.

In lieu of flowers, memorials may be made to the Alzheimer's Association, In Memory of Mary Frances Singletary, 919 N. Michigan Ave. Suite 1000, Chicago, IL. 60611.

Arrangements were by Tomlinson Funeral Home and Crematory of Swainsboro.