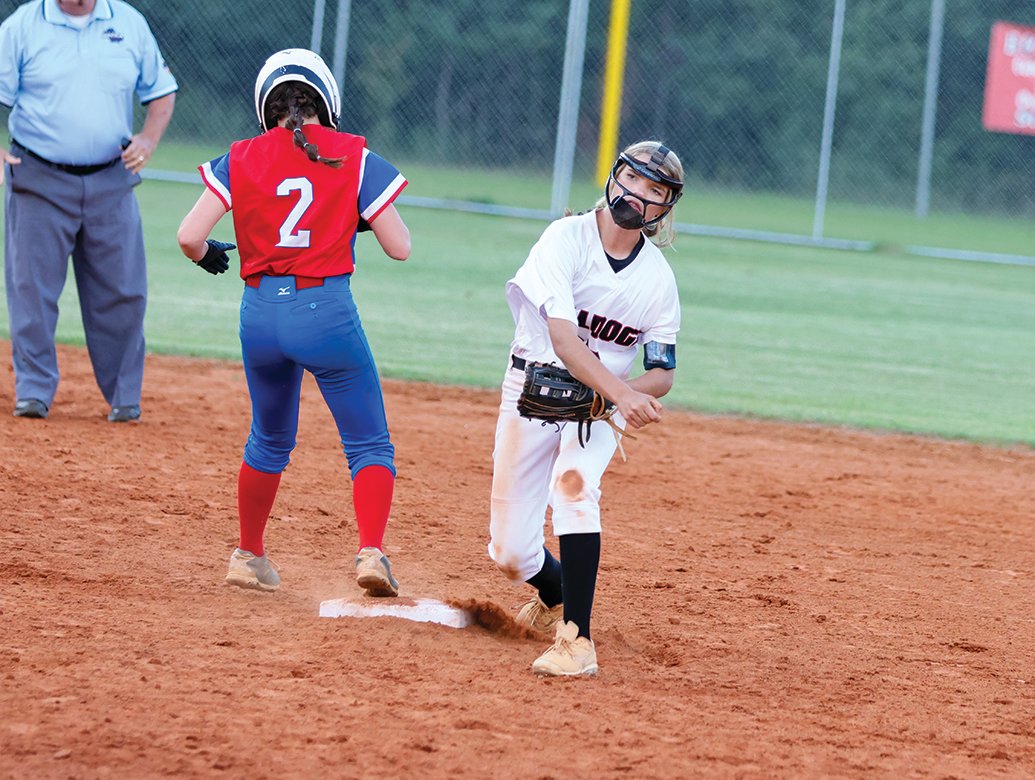 The ECI softball team continued their hot streak last week picking up 3 more wins to improve their season record to 14-4 and 4-0 in region. The offense and defense were hitting on all cylinders, outscoring their 3 opponents 30-3 last week with 2 region and 1 non-region game.

The Bulldogs ran the bases swiping ten during the game, one which led to the first run of the game after Jayna Kearson single in the first inning for a 1-0 lead.

ECI scored 4 more runs on 4 hits in the bottom of the second inning for a 5-0 lead. Sullie Boddiford and Lola Walden were on base with singles, with Ally Taylor reaching on a double while Karly Oliff hustled for a triple.

ECI added one more in the third inning to lead the Eagles 6-0 after three innings.

The Eagles scratched one on the board in the top of the fifth for a 6-1 score.

The Lady Dawgs broke the game open in the top of the fifth inning. With bases full of Bulldogs, Charla Clifton sent the fans home on a walk-off grand slam homerun over the centerfield fence for a 11-1 win.

Boddiford had the multiple hits for ECI with 2 with Kelsey Harper, Kearson, Clifton (with 5RBI), Ally Taylor and Walden ending the game with 1 hit each.

Boddiford pitched the first 4 innings for the Bulldogs allowing just 2 hits, while striking out 7. Kayanna Thompson pitched the fifth inning giving up a hit.

Wednesday the Bulldogs traveled to Harlem to face the 15-1 Harlem Bulldogs. When ECI left town, they were the 15-2 Harlem Bulldogs. The Lady Dawgs defeated Harlem earlier in the year and are the only team to put a blemish on the AAA region 4 leaders.

Harlem, looking to avenge their only loss of the season, struck first in the game. After a leadoff walk, followed up by a double, Harlem led 1-0 in the first inning.

With Kayanna Thompson on in the third inning, Kelsey Harper singled, scoring Thompson to tie the game 1-1.

Harlem took back the lead in the bottom of the inning after a single, followed by another double for a 2-1 Harlem lead.

Clifton led off the fourth with a single and later scored on a single by Kayanna Thompson to tie the game 2-2.

Shayla Stephenson, returning after an injury, doubled in Harper and Clifton who were on after walks in the top of the fifth inning to put the Bulldogs up 4-2.

The Lady Dawgs held off the Bulldogs from Harlem the final 2 innings to take another win from the Bulldogs 4-2.

Harper, Clifton, Stephenson, Ally Taylor, and Thompson had the 5 hits for the Bulldogs in the game.

Clifton toed the rubber for ECI, going the distance giving up 4 hits, striking our 8 batters.

Thursday the Lady Dawgs won their fourth region game against Jenkins Co., defeating the Eagles 15-0 to extend their win streak to six. Stats and line score are not available.

ECI only has one game on the schedule this week. Tuesday, (yesterday) they played Portal in another region match-up. They don’t have another game until September 27 when they host the Buccaneers from McIntosh Co.