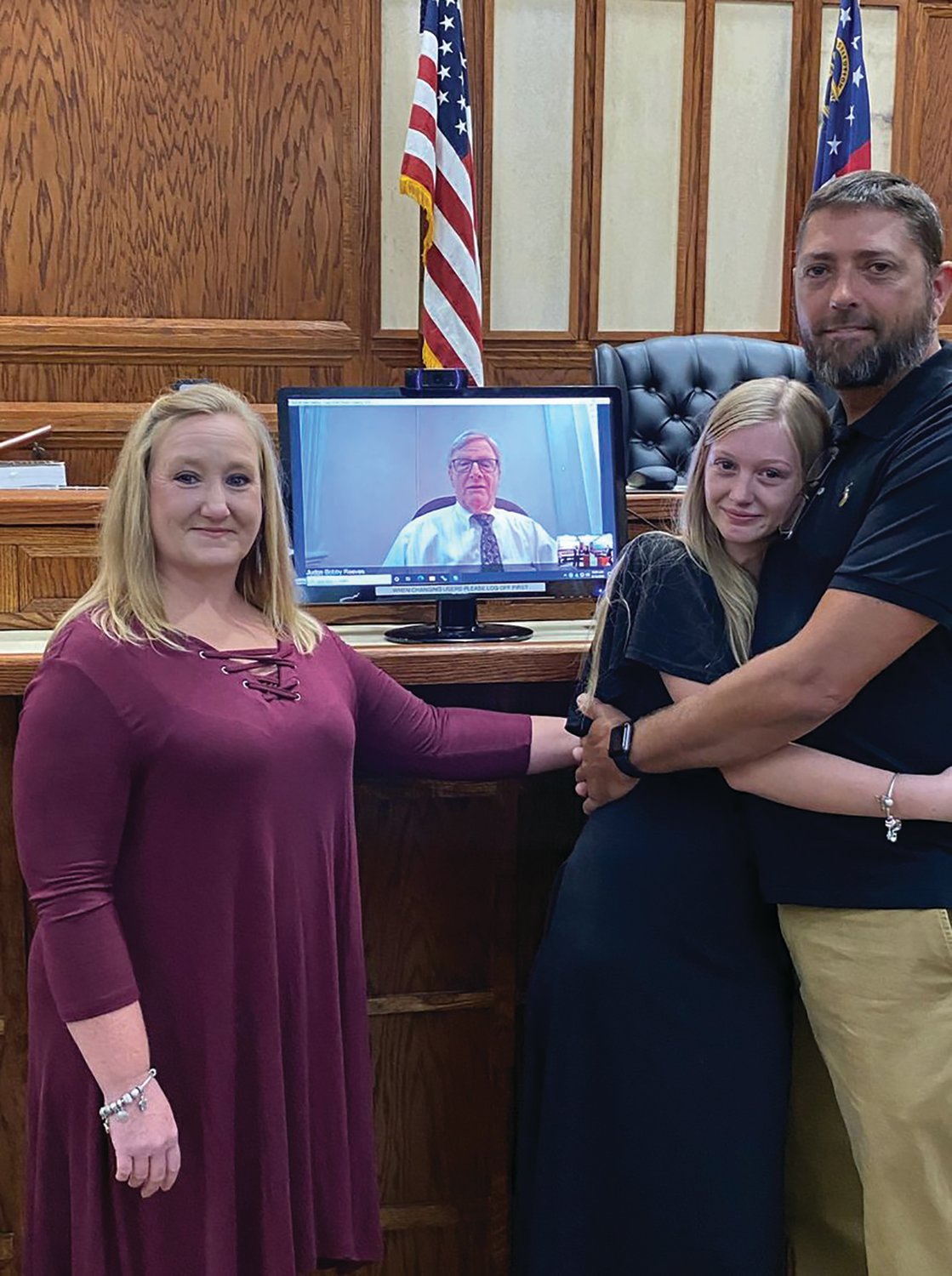 When you give a girl a father, there’s not much more that could be asked for; and when you give a man a daughter, there’s no limits set on the lengths that man would go for his little girl. When a father chooses to adopt a girl as his daughter here in Emanuel County, there’s no stopping the Honorable Judge Robert Reeves on the matter if he deems the situation beneficial for those involved, and that’s just what happened with the recent adoption of Alexie Ragland, formally known as Alexie Carrol, during Emanuel County’s first-ever Zoom adoption.

Alexie was first introduced to the man she refers to as her “now-dad”, Carl Ragland, at the young age of 8-years-old and says that he has been an inspiring male-figure in her life ever since.

“Me and my dad have a lot in common. We are so similar. We like the same music, movies, and cartoons. We like to hunt, and we both have terrible eyesight, so we make fun of each other all the time about it and there is a lot more. The bond we built was very natural, we didn’t have to try. It was like I’ve known him since I was a baby,” Alexie rambled with excitement while speaking about her father.

It’s safe to say that the love between these two are equivalent and second to none when speaking to Carl about his daughter.

“My daughter has many great qualities, but I am just glad to have the privilege of raising a daughter. She is beautiful and smart, when she puts her mind to it. She loves to hunt and ride the tractor with me, but I think her greatest quality would be her compassion for everything around her, like the earth, people, animals - just everything,” Carl commented.

Although there are other siblings to share the parents of Alexie, she is the only daughter and the only child to go through with the recent adoption. According to Alexie, Carl has a son named Damien Ragland and her mother, Renee Ragland, has a son named Peyton Carroll who shares the same biological strands as his sister but still goes by the last name of their biological father.

“My dad (Carl) was the one to first bring up the subject of adoption, and my mom kind of ran with it after they asked me about it, which I agreed,” Alexie explained.

According to the Raglands, the adoption process took approximately two years to complete due to the COVID-19 pandemic and began with inquiring on Alexie’s biological father’s willingness to waive his rights as father, which is said to have been handled easily.

Next was the vetting process. During this portion of the adoption, background checks and home visits were performed as well as participation with court hearings to ensure the adoption was adequate.

“There were many processes we went through. It was very tiring and expensive, but my parents never gave up,” Alexie commented.

The final step was sealing the deal by finalizing the adoption, which, by the grace of presiding Judge Reeves, was performed via Zoom.

“A lot of emotions flooded all of us the day the adoption took place. Fear was one of them. It was my dad’s birthday and we drove to the courthouse, but the staff told us there was no court happening that day. So, our lawyer found a way to talk to the judge and we all agreed on doing it via Zoom. Judge Reeves popped up on the screen while he was in the county over, and, in that courtroom, he finalized my adoption. Happiness spread through all of us, even some of the staff cried,” Alexie stated while reminiscing back to that special day. “He (Judge Reeves) made it work so that my heart wasn’t shattered that day.”

“Seeing the bond shared between Alexie and Carl certainly makes the heart shine bright. It feels great to know that she has a father she can look up to. He sets a great example of a dad and how a man should treat a woman. I know he would lay his life down for her and loves her unconditionally,” Renee commented.

“My dad is my inspiration. He works hard than anyone I know. There was nothing like the day I finally got adopted. I’m grateful of everything my dad does. He is a kind, funny man who is just a good dad. He has basically raised me. He has taught me a lot about life, and I don’t know what I would do without him. He is going to be the one to give me away at my wedding one day,” Alexie stated.

During the conducted interview, Alexie deemed Judge Reeve’s ruling as an inspirational one after observing first-hand just how far the Emanuel County judge would go to find a way to make the adoption work, and Judge Reeves was honored to be able to do so.

“I love adoptions. They are one of the few happy things judges do. I especially enjoy it when the children are present, and I can interact with them, ask them what they think, and see the joy on their faces when I tell them they are now a member of the family, their name is the same as the “parents”, and they have a “forever home”. So, I miss that with the virtual adoptions, but the joy is still there, and I am happy to accommodate the parties when live appearances are not possible,” states Judge Reeves.

Having completed the adoption process, Alexie’s testimony to others is simple yet empowering.

“I want to tell everyone who is trying to get adopted during the pandemic or even when this all hopefully ends to never give up. Take the leap because you only live once, and life is to short not to try. If you want it done, you can’t give up, and nothing is impossible unless you don’t try.”