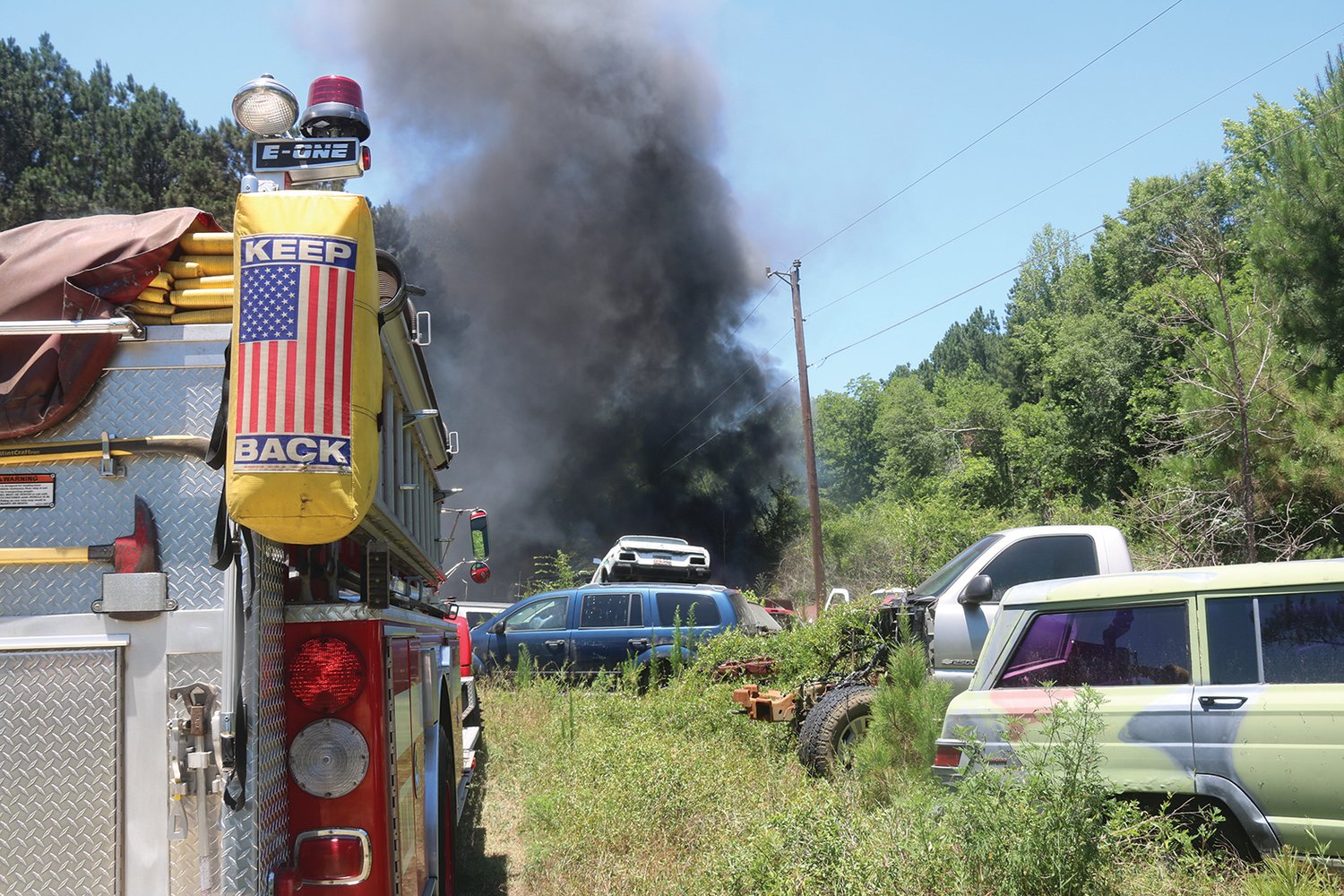 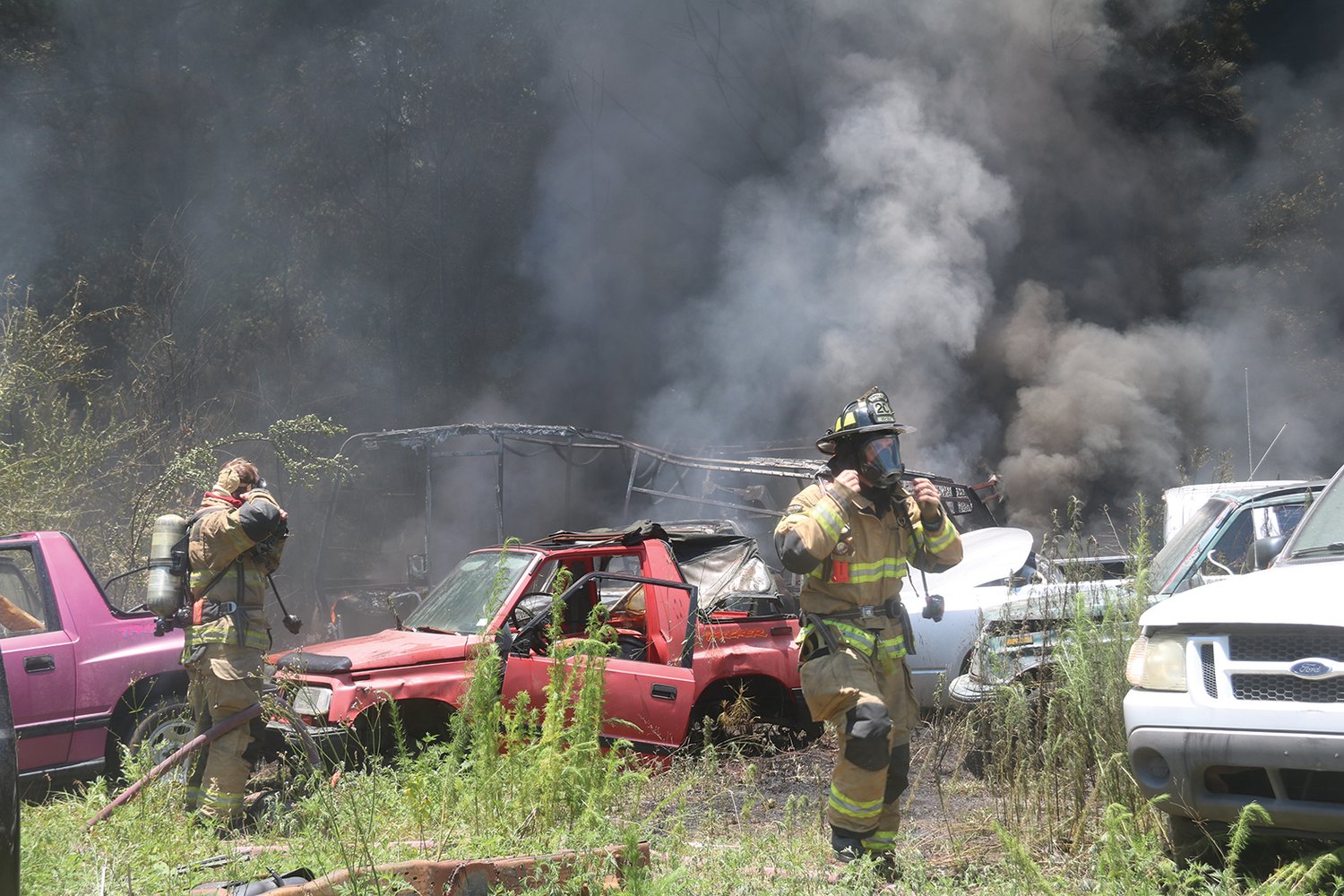 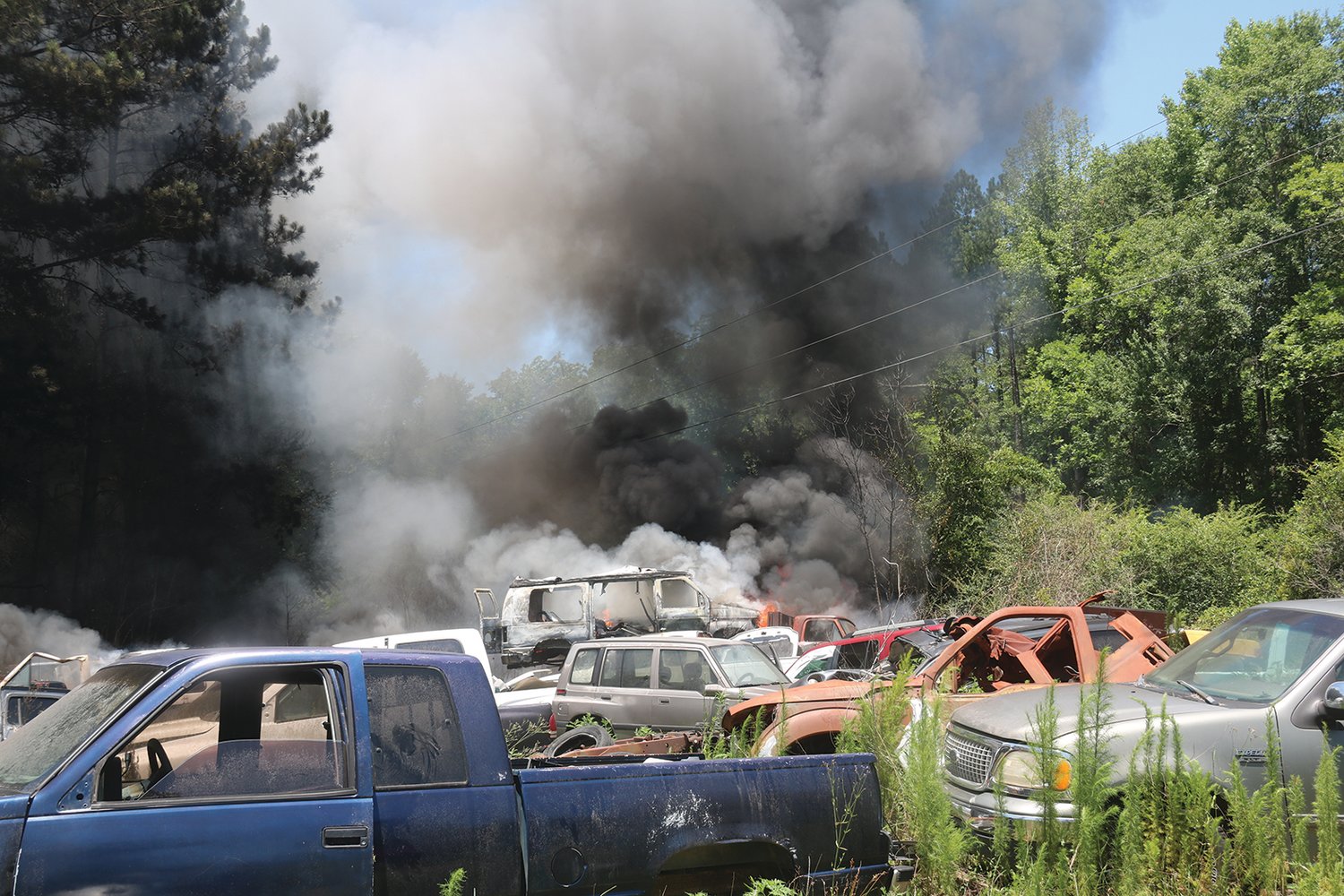 Father's Day traditionally is a day of rest when dads and family get together to honor their fathers. A large part of the event is the preparation of food, and cooking on the on the outside grille and enjoying cold liquid refreshments. Unfortunately, 30 members of the fire service in Emanuel County spent a good portion of the afternoon battling a junkyard fire. At 12:42 pm E911 was notified of a brush fire at 1460 Highway 80 East and dispatched Swainsboro Engine 3 and Support 2. Engine 3 reported heavy black smoke visible and requested Twin City to respond also. Arriving on scene Engine 3 reported the fire was at Hadden's Wrecking located at 1523 Highway 80 East and several vehicles burning and numerous small explosions occurring. A 1 ¾ inch attack line was stretched and operated on tank water. Twin City engine 202 arrived and operated a 1 ¾ inch attack line on another portion of the fire. Twin City Fire Chief Foster Grimes, requested additional apparatus from Canoochee, Dellwood, Norristown and Summertown to respond. Due to being in the county there is no water supply i.e. no hydrants or water mains in the area. Engines were using their tank water (1000) gallons per truck. As other units arrived, they would transfer their water to Engine 3 and Engine 202, then drive 3 miles to a hydrant located in Swainsboro at Lake Luck Drive and East Main Street, fill up and return to the scene and transfer water. Due to the acrid black smoke and materials burning, firefighters were using air packs and full protective turnout gear in temperatures at mid ninety degrees not counting the radiant heat from the numerous fires. Firefighting foam was used to extinguish burning tires and grease and oil products. GA Forestry plowed a fire break around the area and the adjacent trailer Park. A rehab area was set up and EMS personnel were monitoring firefighters for any signs of heat related issues. Charles Hadden, owner of the property reports dozens of vehicles destroyed or damaged. The cause of the fire is suspicious and pointing to youths playing with fireworks. The following units and personnel responded: Swainsboro 2 engines, 1 quick-response brush truck, Mobile Command Post, Special Ops (rehab unit) and 11 personnel; Twin City 2 engines, 1 quick-response brush truck and 9 personnel; Canoochee 1 engine, 1 tanker and 3 personnel; Dellwood 1 engine, 1 quick-response brush truck and 3 personnel; Norristown 1 engine and 2 personnel; Summertown 1 engine and 2 personnel; EMS 1 ambulance and 2 personnel; Georgia Forestry 1 quick-response brush truck, 1 tractor and 2 personnel; Sheriff’s Office 2 deputies.