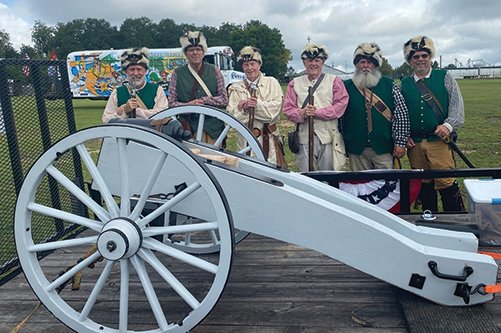 Six Compatriots of the East Fall Line Region traveled to Waynesboro, on Saturday, September 10, 2022, to march in the Farm-Fest Parade that began at 11:00 a.m. Those in attendance were Lee Herron of the Brier Creek Chapter, Don Bazemore of the Brier Creek Chapter, Wilder Smith of the Wiregrass Chapter, Dess Smith a dual member of the Patrick Carr Chapter, Bernard Martin of the Brier Creek Chapter and Steve Burke of the Wiregrass Chapter. The East Fall Line members marched over one mile and demonstrated their 69 Cal., 75 Cal. and 50 Cal. flintlock's by firing them eight times over the course of the route. Bernard Martin also had his new and completed 6-pounder field gun, loaded on his trailer, and pulled while the march commenced.