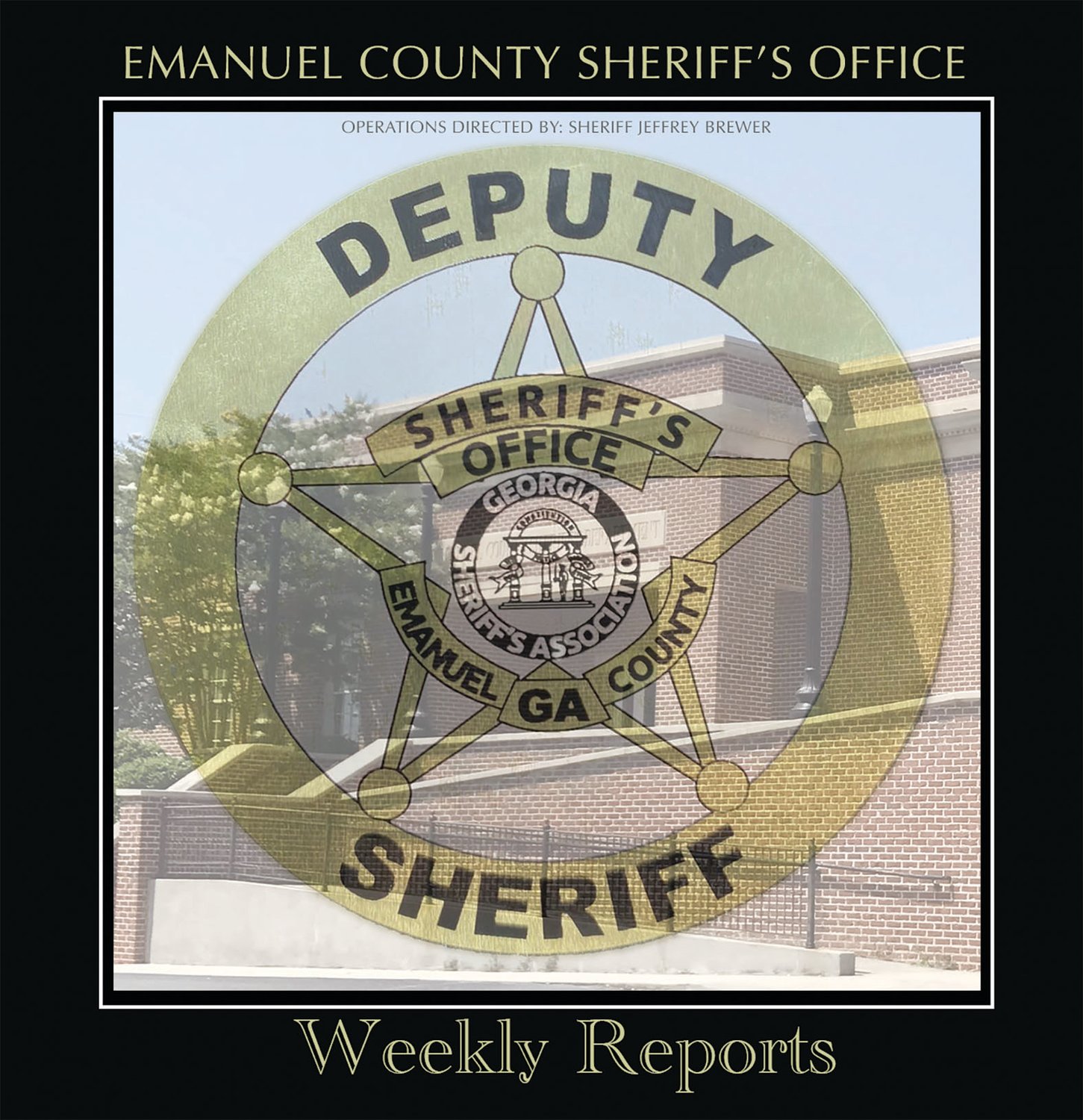 Complainant stated witness told her that offender said c/p was going to pay him $9,600 for the truck her son destroyed and if she didn’t, he was going to kill her, her husband, and her son. C/p wanted a report in case offender tried to make good on his promise and she is afraid of what he might do.

Deputy was dispatched to Watson Rd. in Midville in reference to a littering report. A large amount of household garbage in black trash bags was fund dumped out on the side of the road. Code enforcement was advised of the call.

Deputy met with complainant at ECSO in reference to a lost tag. C/p stated the dealership didn’t send it over.

Deputies were dispatched to Hwy 56 North in reference to complainant advising of an abandoned vehicle blocking her driveway. C/p was contacted by phone and advised of contact information for a tow service and if the vehicle was on private property, she could have it removed. C/p stated the vehicle had been left blocking her driveway the previous night, appearing to have a flat tire. C/p stated she believed the owner would return to retrieve the vehicle but didn’t. Towing company was contacted by c/p for removal of the vehicle.

Deputies responded to Oak Park in reference to juvenile riding a dirt bike with no helmet and call was concerned for his safety.

Deputies responded to Cowford Bridge Rd. in reference to a welfare check. Deputy made contact with a female who the caller was concerned for her safety. The female advised that she was ok and she and her boyfriend had a disagreement but everything was fine. Deputy did not see any marks or signs that would suggest otherwise.

Deputy responded to Hwy 57 East in reference to a stolen tag. Victim stated she noticed it was missing from her vehicle and wanted to report it stolen. Victim stated she suspected a known subject stole it because he had done it several times before. Victim stated she went to witness’ residence and he stated the tag was on offender’s car. Deputy talked with witness who stated offender had been driving the vehicle and he did not have a driver’s license and the vehicle did not have a tag on it until recently. Victim showed deputy the vehicle registration where she purchased the tag for the described vehicle belonging to her. Deputy allowed victim to remove the tag from the vehicle belonging to offender and take it with her. Deputies went to another residence where offender came to the door and when asked about the tag, he stated he needed it to drive his vehicle. Offender was arrested and transported to EmCo Jail for theft by taking.

Deputies responded to Red Oak Rd. in reference to someone exposing himself in front of children.

Contact was made with offender on Caraway’s in reference to a disturbance call made from the business. Deputies were advised that offender entered the business and became irate and was asked by staff to leave at which time offender became aggressive and attempted to climb over the counter towards staff members. Deputies were further advised offender entered onto the property with a dog that offender also used as a form of intimidation towards staff. Offender was taken into custody and transported to the incident location where he was identified by witness.

Offender was issued a Criminal Trespass warning and charged with Disorderly Conduct.

Deputy took a report at ECSO in reference to a burglary. Victim was deaf therefore there was a communication barrier between deputy and victim. The sister of the victim assisted in understanding the situation and translating. Complainant advised that the victim went to her shed and noticed the door had been pried open and advised there was Christmas items, lights, and pictures taken. C/p advised that the building was locked prior to the break in and there were two visible pry marks. Deputy advised c/p that an investigator would be in contact with them.

Deputies, along with EMS, were dispatched to Beagle Rd. in reference to a male who had orally ingested paint thinner. It was unknown if the male had done so with intentions of harming himself due to the caller not advising of further information prior to ending the call. Deputies met with several individuals out side and the male in question was brought outside by subjects on scene. Offender was transported by deputy to meet with EMS for further treatment.transport.. Subjects on scene advised the incident to be accidental due to the container the paint thinner was in. The container did smell like paint thinner but could have been easily mistaken as a consumable drink. Subjects on scene advised offender had no intentions of harming himself nor had made statements of such prior to ingesting the liquid. It appeared as though only a small amount of the liquid had been ingested.

Deputy met with complainant at ECSO where c/p stated his sister/suspect has been verbally abusing him and giving terroristic threats that she was going kill him. C/p stated that about a month ago, suspect hit him with a cane in the face. C/p stated he didn’t want to press charges but he wants it noted in case something happens. C/p stated he went home to take care of his 84-year-old mother and the suspect is mad that he stays with their mother. Deputy met with c/p’s mother outside in the car and she stated she witnessed suspect hitting c/p with a cane. Witness told c/p not to hit suspect back and to let God handle it.

Deputies were dispatched to Island Dr. in reference to a domestic dispute.

Deputies responded to I16 in reference to multiple vehicles that struck debris on the interstate. Deputies found and removed two large pieces of log and assisted all three motorists with changing tires.

Victim stated someone stole two dealer tags off his cars.

Complainant stated the bumper came off her vehicle as she backed out of the driveway, possibly due to an uneven dirt surface of the driveway into the residential property.

Deputy took a report regarding noise coming from Club Rolex. Deputy spoke with c/p who stated he could hear musing being played at his residence. While speaking with c/p, deputy could hear the music coming from the club while standing in c/p’s yard. C/p stated it is a common occurrence.

Victim stated he heard some 4-wheelers on the backside of his property so he got on his tractor and rode back to see if he could find out who it was. C/p found the 4-wheeler tracks and followed them to his neighbor’s property. The neighbors don’t’ stay on the property – they just come on the weekends. Deputy went to the neighbor’s property but the gate was locked.