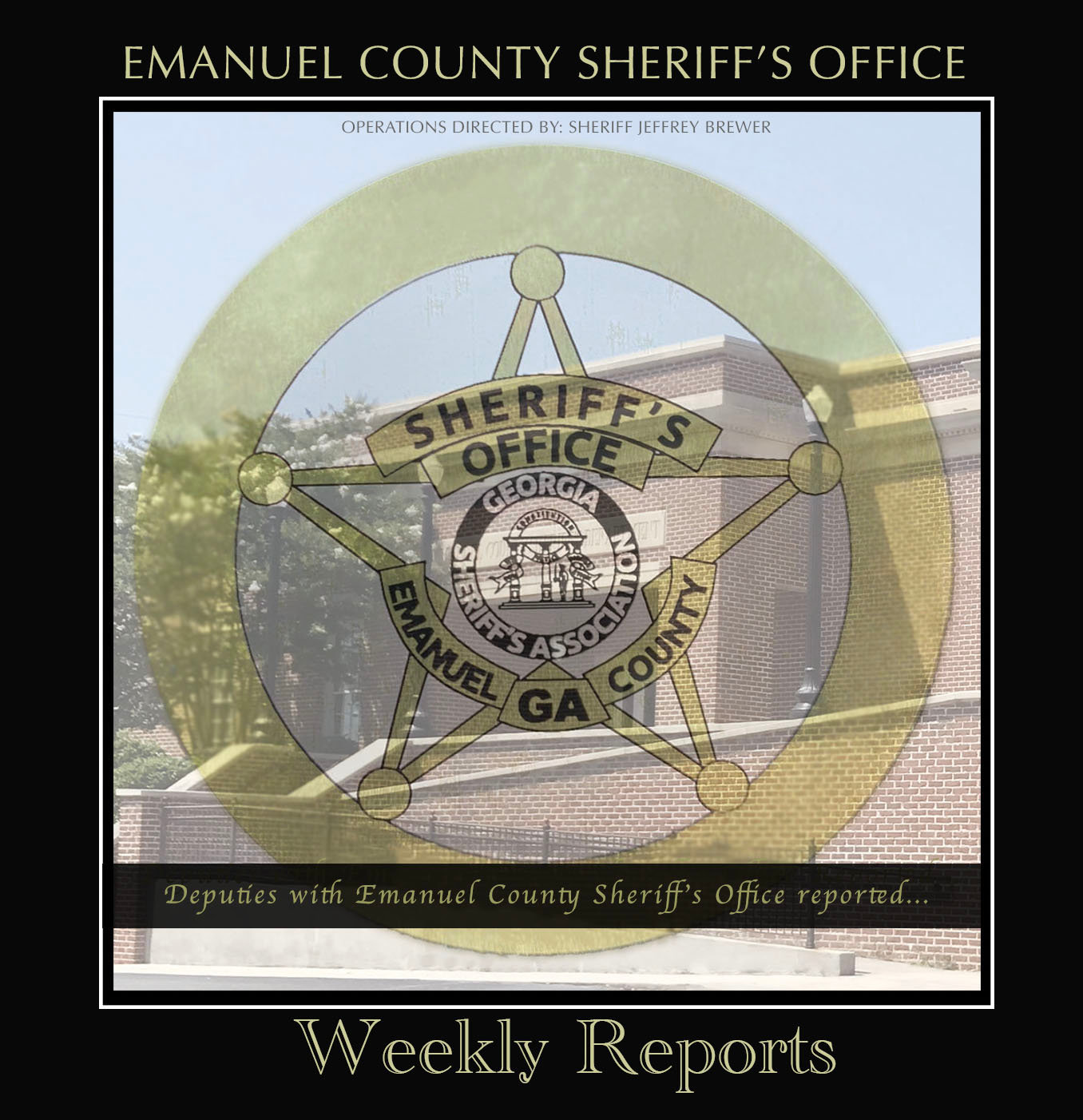 Deputy was called to the Magistrate Court in reference to a civil court hearing. The offender was found guilty of theft by shoplifting and was placed under arrest.

Deputy took a report over the phone. Complainant stated that his neighbor’s dogs continue to come on to his property and he believes the dogs have killed four of his sheep. The offender stated that it was coyotes that killed the sheep and that she is trying her best to keep the dogs on her property.

Deputy was dispatched to Bonnie Road in reference to a family dispute. Complainant stated that he and his grandson got into a heated argument because the grandson was being disrespectful and calling his sister names along with cursing in front of the other residents in the house. The c/p wanted him gone before anyone was hurt.

A call was received from Pinetucky Road in reference to the offender being intoxicated and tearing up items in the yard and trying to enter the residence. C/p stated that the offender was their son and he had broken flower pots on the porch and pulled tin out from the porch. When deputies arrived on the scene, offender ran away and was later arrested without incident. He was charged with Disorderly Conduct.

Deputy responded to Scarboro Church Rd. in reference to complainants advising someone harrowed the road with their personal tractor and destroyed the road. No contact was made with c/p’s and suspect met deputy in the roadway and advised that he was the one that harrowed the road and stated he has called the county road department several times about the condition of the road and was told by a county commissioner “do what you need to do”. The road way was very rough and slick but there had just been a heavy rain fall earlier in the day.

Deputy got a call about a vehicle wrecked in the woods on Hwy 80 East. The vehicle had been wrecked earlier in the morning. A wrecker out of Pembroke was on scene and stated he couldn’t get the vehicle. The owner of the vehicle was not on scene so deputy got a number from 911 and advised the owner he was calling a towing company to get the vehicle.

Deputy was dispatched to Old Nunez Rd. in reference to an abandoned ATV that was advised to have been at the location since the day prior. Deputy spoke to an employee of the business who advised the ATV did not belong to the business or owners.

Deputy met with complainant at ECSO in reference to a damage to property incident that occurred on Blackberry Rd. Complainant stated the suspect had been allowed into the residence with the understanding that suspect would complete necessary work and maintenance to the residence. C/p further stated that after some time, suspect left the property with damage to windows and sheetrock walls throughout the residence, along with trash that had been littered in and around the residence, along with an abandoned vehicle left on the property. It was further stated that the suspect had also damaged furniture that had been left with residence. Photographs provided by c/p indicated that the property had been left in disarray without care or regard. Damages are estimated to be in excess of $200. C/p expressed interest in pressing charges against suspect for damages to the property.

Deputy met with the complainant at the Emanuel County Sheriff’s Office in reference to a report. C/p stated that she moved in to a residence on Saint Galilee Road on November 1, and signed a 12- month lease in order to rent the residence from the listed offender. C/p stated that she received a certified letter from the actual landowner advising her that she had until January 15, 2024 to vacate the property. She woke up to the offender and a group of guys working to remove the underpinning of the residence and was advised that she had to get out in order for it to be moved. At the time, the offender had not filed for an eviction notice through the Magistrate Court and could not evict c/p. She was informed of this and then came to Magistrate Court and the c/p was then formerly evicted.

Deputy picked up offender from the Vann Community Center and transported him to Emanuel County Jail to wait for transportation to East Georgia Regional.

Deputy was dispatched to South Main Street for a locked vehicle. The vehicle was unlocked successfully.

Deputy was dispatched to Tiger Trail in reference to a fight that had just taken place. Upon arrival deputy met with the victim/c/p who stated that she was arguing with her neighbor (offender) and her mother. Offender hit victim over the head with a cell phone causing her to bleed from the head. She was arrested for assault and battery but was only placed under a 6 hour hold because she was a minor.

C/p stated that he was driving southeast on Gary Road when a deer ran out in front of his vehicle causing him to strike it and his airbag to deploy.

Deputy responded to a fight that took place earlier in the day, and the victim had been transported by ambulance to the ER. When running victim’s name, a bench warrant came back. After being discharged, she was placed under arrest.

Deputy made contact with the listed vehicle on HWY 1 South at Quick Rd. The driver stated that he was driving and struck a deer. There was minor damage to the front of the vehicle, but it was still drivable.

Deputy was dispatched to Eldora Rd in reference to a prowler. C/p stated that a male had been coming to her yard and messing with her motorcycle.

Deputy was contacted by Emanuel County Jail in reference to a call made to them about harassment. The caller stated that her soon to be ex had been making threatening statements to her via text message. He had also been constantly driving by her home. She stated that she had recently discovered that he had been unfaithful, and she filed for divorce, they had a child together. He had also followed her to Statesboro and that she was afraid to leave her residence.

Deputies were dispatched to HWY 80 East in reference to a domestic dispute. Offender stated he was upset because he had been trying to move out of the house, but his wife took his car. He had thrown and broken a few things but they belonged to him. C/p stated that she was at work and needed him gone by 7:00 that night.

Deputy was dispatched to Cordie Rd. to a burglar alarm. There was no sign of forced entry.

Deputy responded to a gunshot call located on HWY 56 North. C/p stated that he was trying to clean his gun and he accidentally discharged it and shot himself in the left hand. EMS arrived and took him to Emanuel Medical Center to be checked out.

Deputy responded to HWY 56/ Bird Flanders Rd in reference to a report of a broken power pole that appeared as if it was going to fall in the roadway. It appeared to have been burnt off. The landowner had been burning fields and causing the pole to snap at the base. The pole was replaced by Jefferson EMC.

Deputy was dispatched to HWY 80 East in reference to the landlord entering the property without permission from the tenant. C/p stated that she is currently moving out and that a pre-arranged time was set for her landlord to do a final walk through. She told her landlord not to come until midnight that night because that was when her lease ended. Prior to this, she had contacted multiple times for a walk through and he had not responded. Later that evening she saw offender walking through the house with someone she didn’t know, but she wanted it documented in case something was damaged and she was blamed for it.