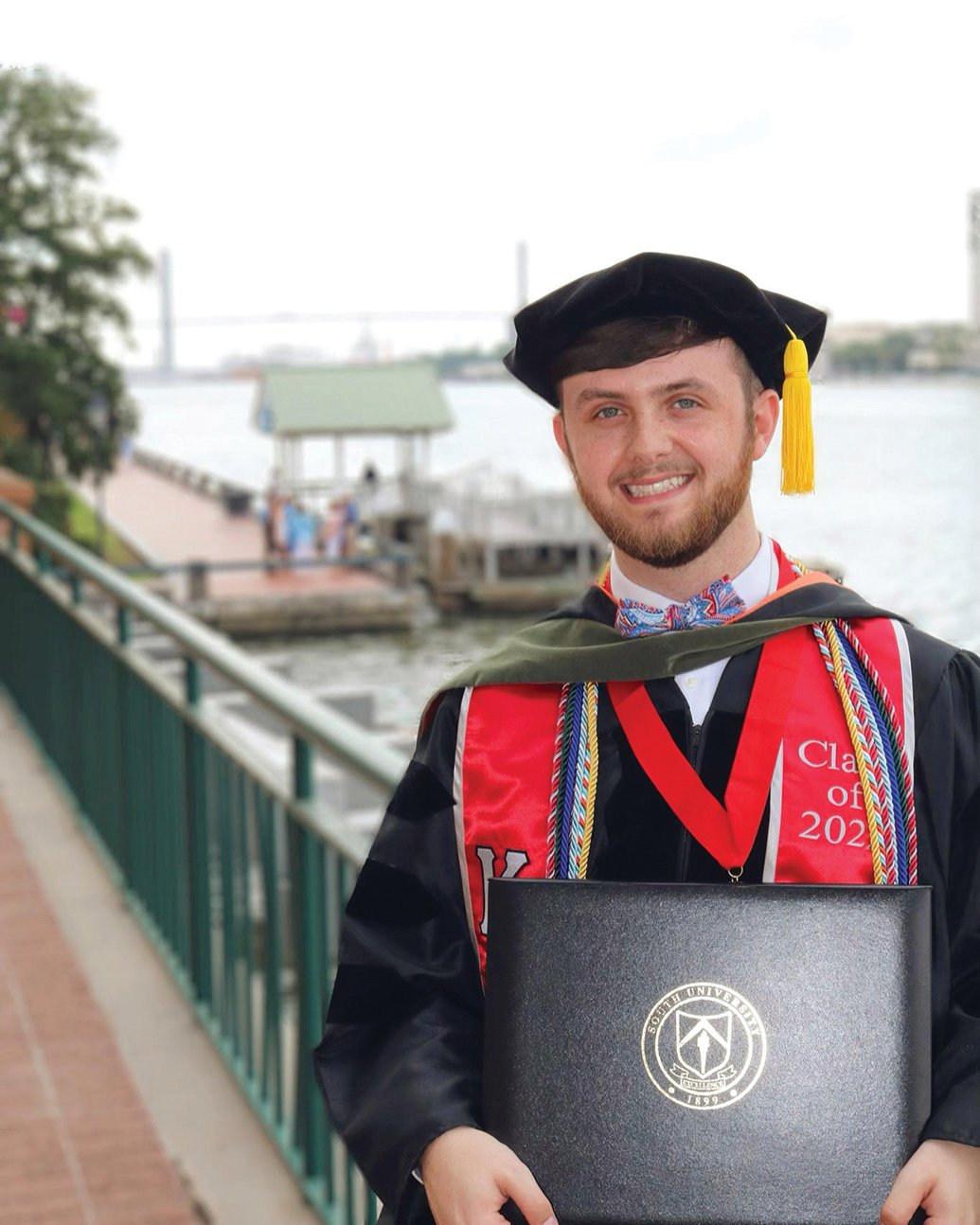 In June of 2017, Caleb Rich walked across Tiger Field as a Swainsboro High School graduate. That same month, just three dedicated years later, he received his doctorate degree in pharmaceutical from South University School of Pharmacy. “I honestly chose to pursue pharmacy at a really young age without knowing anything at all about the field. As I progressed through high school and into college, I found it easier to continue to pursue pharmacy rather than complicate things by bouncing between majors.” During his tenure as a South University pharmaceutical undergraduate, Caleb went above and beyond by being active in several organizations where he held nine separate officer positions at both the local and regional level. Among these organizations, Dr. Rich was an accepted member of the Southeast Province Kappa Psi Pharmaceutical Fraternity. Kappa Psi is the oldest and largest pharmacy fraternity whose mission is 'to develop leaders with a passion for service to their community while creating lifelong professional connections. “I tried to join organizations that allowed me to learn more about all the many facets of pharmacy to help me decide what direction I wanted to take my career in. I was able to graduate with distinction in my fraternity, Kappa Psi." Through this organization, he was able to serve many different communities by participating with food banks, cancer awareness walks, and highway clean-ups but he is most particularly fond of his work with the Be the Match Foundation, during his year as the NCODA President-Elect. “Be the Match is a registry that matches donors with patients who need bone marrow or stem cell transplants. We were able to raise funds to cover the expenses of the procedure for one donor, as well as fund the necessary testing for five other patients.” This life saving work is a passion and hits very close to home for Caleb. "I’ve witnessed my dad go through this same battle and eventually beat cancer, so improving access to and availability of care for cancer patients is important to me.“

With the collaboration of student pharmacists from various universities, the foundation raised funds to sponsor a candidate for bone marrow donation, as well as add five names to the national registry of potential donors. In addition to this, Caleb also received the Mortar and Pestle Award from the Dean of the School of Pharmacy. “The official award description reads ‘It recognizes a student who exhibits excellence in patient care in all aspects of his or her academic pharmacy career and who has demonstrated exceptional service and commitment to the profession of pharmacy.’ The award is chosen by the Dean of the School of Pharmacy and given to one graduate each year. I am honored to be chosen and proud to have made an impact throughout my time at South.” Prior to his educational tenure as a South University of Pharmacy student, Caleb attended East Georgia State College, and the University of Georgia. Caleb described his journey to obtaining his decorate degree as, “not always easy, but definitely worth it,” and is excited about the additional opportunities that now lie ahead for him. “I owe all my accomplishments to my family and friends. There hasn’t been a day over the past 3 years of Pharmacy School that I didn’t speak to my parents. Without having them to listen to the constant complaining and stress that comes with pursuing a doctorate degree, I don’t think I would have made it. There was never a time when I felt alone throughout my schooling. I knew that at any given time, I had my family and friends to go to for advice.” Caleb's current plans are to travel to Raleigh, North Carolina where he will complete a postgraduate residency program at Eastern Carolina Medical Center. “While there, I will be specializing in Ambulatory Primary Care. Most of my time over the next year will be spent managing patient’s chronic disease stages, such as diabetes and hypertension. I will be practicing as a pharmacist under a collaborative practice agreement with primary care physicians in a medication management role. This residency will serve to set me up for a career in the Ambulatory Care field.” Today, Caleb has successfully completed his formal education with the well-earned official title of ‘Doctor’ and has some inspiring words to share with anyone hoping to pursue their own dreams. “My biggest piece of advice for any high school or undergraduate students would be to find something that you are passionate about and see it through. There have been many times throughout my educational career that I could have easily given up, but luckily for me, I ended up loving pharmacy and can now see things from the other side and say, ‘I made it’, which is a great feeling.” There is no doubt that Dr. Caleb Rich, one of our very own small town, Swainsboro High graduates, son of Cynthia and Stacy Rich, will continue to make a huge impact throughout his career and be one of Swainsboro's 'hometown heroes' for decades to come. Congratulations Dr. Rich! We know that you’re going to change the world.