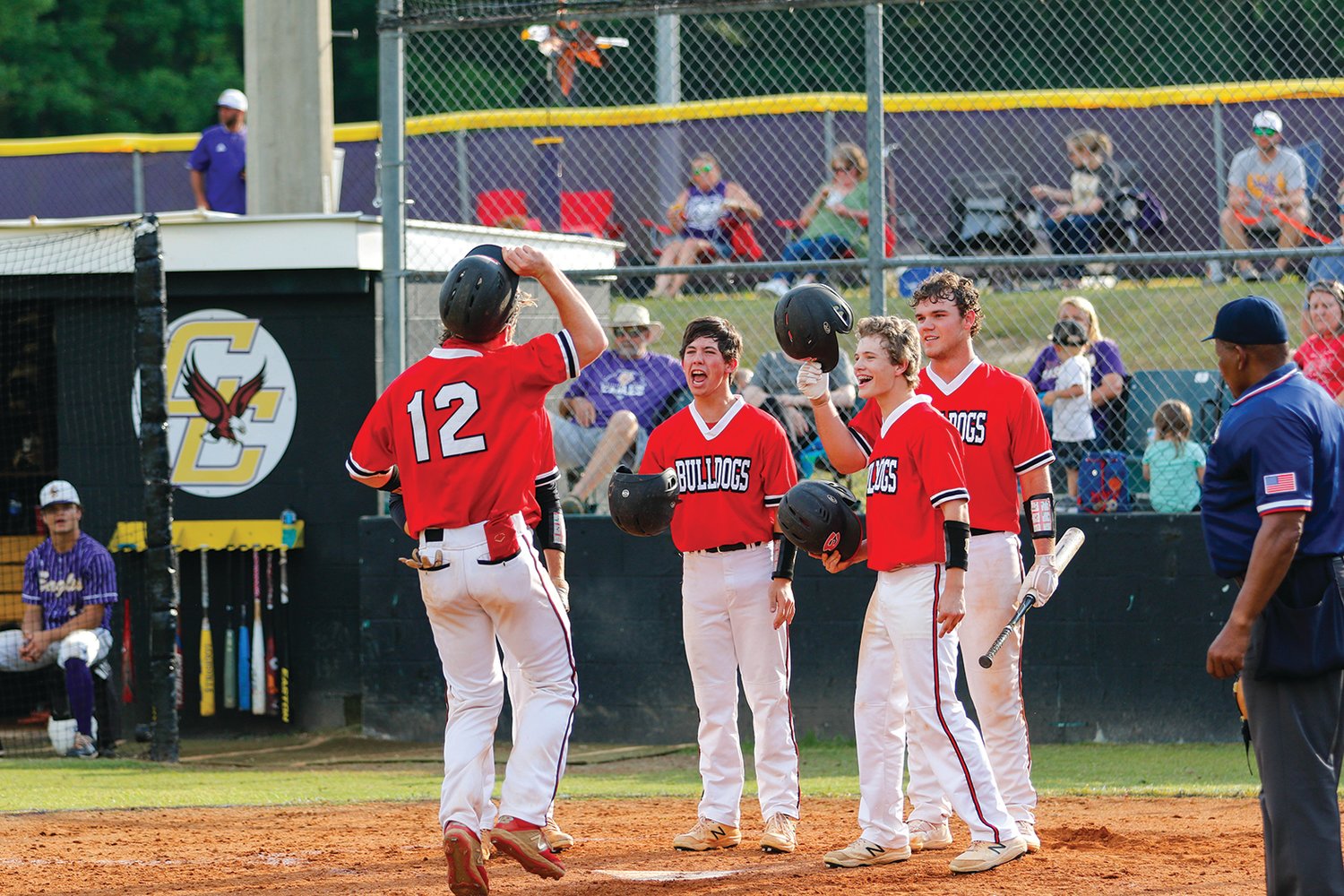 WALDEN CLEARS THE BASES FULL OF BULLDOGS IN THE FOURTH
RON WEATHERFORD
Posted Wednesday, May 11, 2022 10:41 am

The ECI baseball team swept their second best of 3 series against Crawford last week to advance to the Elite 8 of the state playoffs.

They began the state playoffs sweeping the number one seed Baconton Charter from region 1 and took both games in the second round against the second seed from region 7, Crawford Co. 9-8 and 12-2.

The Bulldogs are the lowest seed at number 4 left in the playoffs.  Joining the Bulldogs in the Elite Eight are 6 number one seeds (region champions) and one number 3 seed.

ECI bested Crawford Co. in Roberta in a back and forth game to begin the best of 3 series 9-8 on Wednesday.

The game remained scoreless the first two innings but both teams broke through for 7 combined runs in the third inning.

Bryce Kearson reached on a one out single in the top of the third and advanced to second on a Gabe Lee walk.  Jack Walden sent Kearson home on a double for a 1-0 lead.  Lawson Mercer singled one batter later to score Lee and Walden as the Bulldogs took a 3-0 lead.

It would be short lived lead as the Eagles struck for 4 runs in the bottom of the inning on 3 singles, 2 walks and a double to take the lead 4-3.

The game was delayed in the second inning due to lightning.  Lightning struck for the Bulldogs in the top of the fourth inning scoring 4 runs on the back of a Jack Walden grand slam.

With Joseph Stewart on after a single, the Eagles intentionally walked Kearson.  Gabe Lee spoiled that decision with a single loading the bases.  Jack Walden emptied those bases full of Bulldogs with a shot over the left field fence for a 7-4 ECI lead.

With Aden McQuaig and Lee on with walks in the top of the fifth, Walden singled in his sixth and seventh RBI to make the score 9-4.

Crawford wasn’t throwing in the towel scoring 3 runs in the bottom of the sixth. The Eagles made the visitor’s side nervous putting one more on the board in the seventh.  With two runners on, Kearson struck out the final batter to seal the 9-8 win.

Jack Walden led the offense going 4-5 with 7 RBI, HR.  Lawson Mercer was 3-4 and Kearson and Charlie Rehberg ended the game with 2 hits.

It would be Crawford who took an early lead in the second game Wednesday to lead 1-0 in the top of the second.

The Bulldogs loaded the bases in the bottom of the inning.  Instead of a homerun the Bulldogs used small ball and patience at the plate to take a 3-1 lead.  In the inning ECI had singles by Rehberg, Durden and Kearson along with walks by Lee, and Walden.

Crawford fought back for a run in the top of the fourth for a 3-2 score.

It would be the bottom of the fourth that took the wind out of the sails for the Eagles as the Bulldogs struck for 8 runs.  All 8 runs were scored with 2 outs in the inning.

ECI added one run in the sixth inning for a 12-2 lead to run rule the Eagles in 6 inning to sweep their second consecutive series.

Kearson had the multiple hits with two with 7 other Bulldogs getting one hit each.

Joseph Stewart went the distance for ECI scattering 7 hits while striking out four.

The Bulldogs traveled to Commcere yesterday to face the number 1 seed from region 8, with the first game of the doubleheader starting at 4:00.  The if needed game is scheduled to 2:00 today.  Results will be in next week’s edition of The Forest Blade.

The Tigers have a 24-11 season and 15-3 region record.  The number 3 seed from their region 8, Social Circle also advanced to the third round.

In other region 3 playoff teams that played in the second round, Metter easily took care of GMC 10-0 and 16-3.  The Tigers will play Gordon Lee Tuesday.