A Typical Night in The Pecan Grove 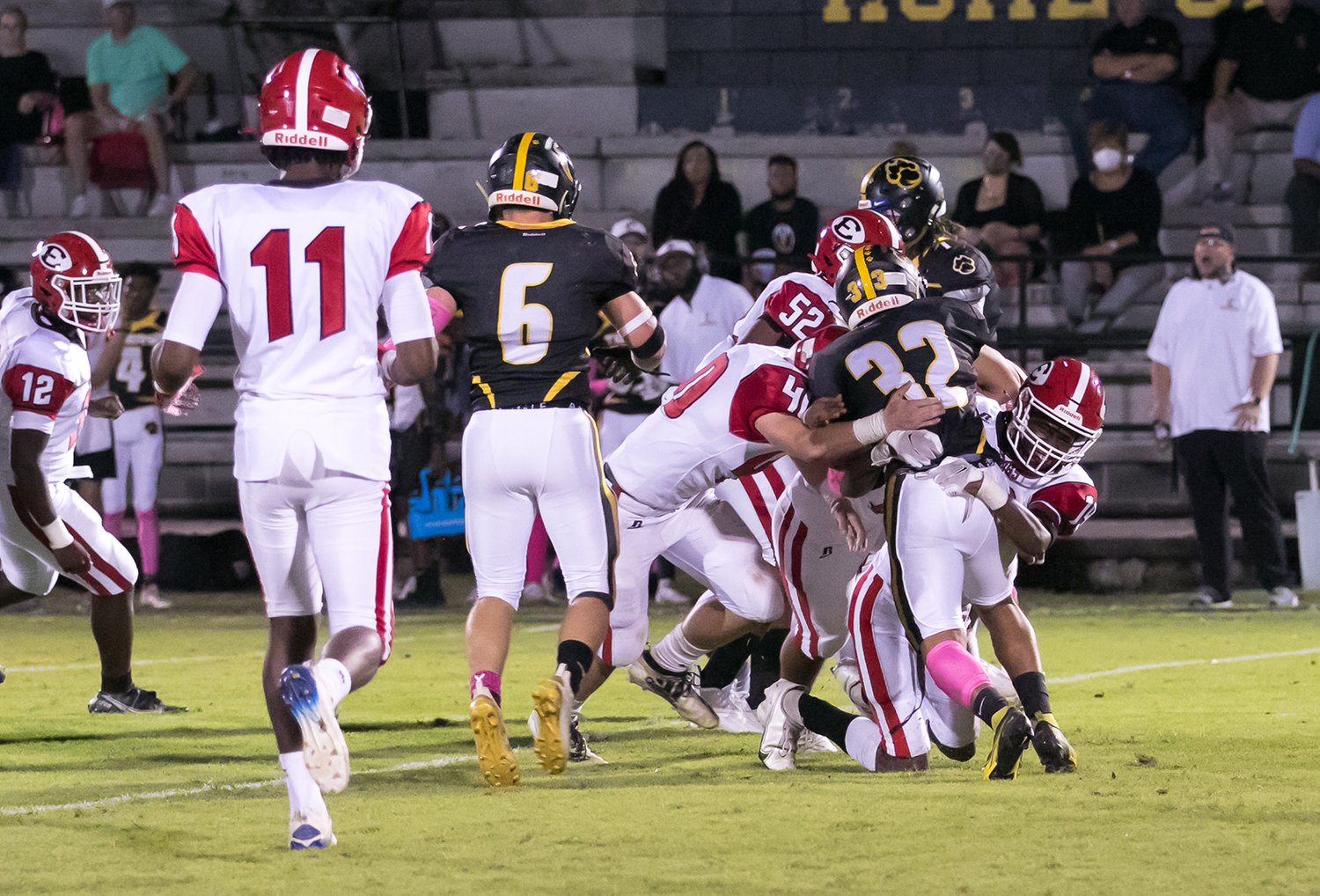 There are just some teams that you don’t match up well against. For the Bulldogs year in and year out, even in championship years, it seems that team is Claxton. Throw into mix a frustrated one-win team and you have the potential for an interesting game.

It was another typical contentious, chippy night in the Grove for the Bulldogs defeating the Tigers 28-10 to remain undefeated in region play and tied currently with Metter.

“I’ll be glad when their new stadium is complete so I can get away from the Grove,” commented Chris Kearson. “We always seem to struggle in the Pecan Grove. I’ll take the win anyway I can get it, but wow. It wasn’t our best week of preparation and it showed. I’ve got to do a better job of helping our kids tune out the distractions and focus on the task at hand.”

The Bulldog defense shut down the Tigers’ run game to minus 18 yards on the ground. Claxton only managed 48 total yards in the first half, 40 of which came on one pass play. The Tigers did find success in the air in the second half with 143 yards that led to Claxton’s only touchdown.

The Bulldogs for the most part held the Claxton quarterback in check holding him to just 10 completions out of 27 pass attempts.

The Bulldogs got the first break of the night when the Tiger returner mishandled the opening kickoff. ECI recovered on the Claxton 16 yard line.

The Bulldogs took an early lead 5 plays later when DJ Jones bulled over from the one. Samuel McBride, 4 for 4 on the night, split the uprights for a 7-0 ECI just 3 minutes into the game.

The Tigers answered back with a 37 yard field goal, set up by a 40 pass to the Bulldog 19 yard line. The pass play was just their third positive yard play in the first quarter.

The Bulldogs began the second quarter at their own 21 yards line. Using DJ Jones and PJ Farnum they ground the ball down to the Claxton 18 yard line. The drive ended when ECI fumbled at the goal line after an 18 yard run.

Claxton was not able to move the ball out of the shadow of their own endzone, losing yardage on their next 3 plays with ECI taking over at the Claxton 25 yard line after a Tiger punt.

On first and 10 from the Tiger 15, Jones drug Claxton defenders the last 10 yards for the junior’s second touchdown of the night for a 14-3 Bulldog lead.

The Bulldog defense stymied the Claxton offense in the second quarter holding the Tigers to minus one yard for the 12 minutes.

ECI used the ground game after halftime to wear down to big defensive line throwing just one pass in the second half.

The Bulldogs took the opening kickoff of the second half from their own 20 and drove to the Claxton 30 taking 7 minutes off the clock. The drive stalled after the fourth down pass fell incomplete with the Tigers taking over from there.

Unable to gain any yardage on the ground the Tigers started finding success through the air. They completed 4 passes in the drive to take it down to the ECI 9 yard line.

On third and goal from the ECI 9 the Bulldog’s caused the second Tiger fumble of the night when the Claxton quarterback fumbled the ball on a scramble with ECI taking over at their own 12.

Still leading 14-3 at the end of the third quarter the Bulldogs put 14 more points on the board in the fourth quarter scoring touchdowns on both drives to extend their lead.

The Bulldogs drove the ball 82 yards for their first score of the quarter. The Bulldogs used one pass play to extend the drive. On third and 15 at midfield, Bryce Kearson hit Chris Jackson on a seam route for a 32 yard gain to the Tiger 13. On second and goal Kearson called his own number on a keeper around the end for a 21-3 ECI lead with 7 minutes left in the game.

The Tigers found the endzone on the ensuing drive. Claxton had the ball 8 plays on the drive, but only 2 gained any yardage. The first was a 43 yard pass down to the Bulldogs 14. The second was on fourth down 5 plays later for a Tiger touchdown to make the score 21-10 with 5:49 left in the fourth.

The Claxton onside kick failed to go the necessary 10 yards and the Bulldogs took over their last drive of the game at the Tiger 49 yard line.

The Bulldogs offense pounded the ball down to the Tiger 20 yard line using mostly the hard running up the middle by their 240 pound fullback Jones. On second down at the Tiger 20, freshman Brian Steele, running over Tigers, scored his first TD of the night to make the score 28-10 with 2:23 left in the game.

Claxton ran out the clock on their next time with the ball with the Bulldogs taking the game 28-10.

The Bulldogs had two backs reach the century mark. Farnum rushed for 109 yards with Jones right behind with 102 yards to lead the 6 back attack.

Kearson was 5-8 for 68 yards through the air. Jackson caught 2, with Jeremiah Mack, Farnum and Cordarius Lee grabbing the other three.

The Bulldogs will play their third road game in a row when the cross the river to take on Jenkins Co. this Friday.