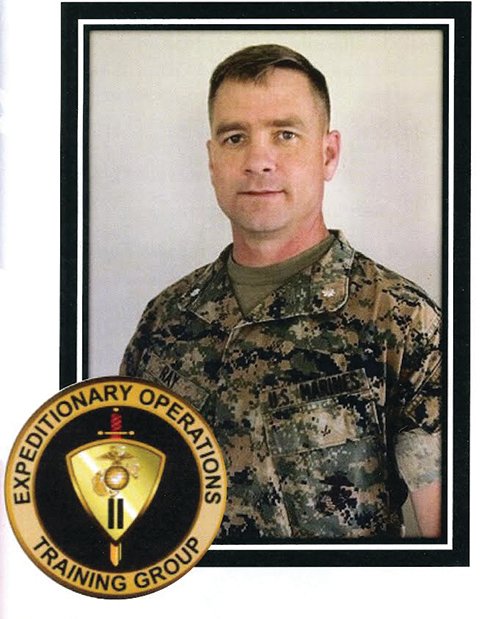 When then, high school senior Stephen Ray, was interviewed by Congressman Charlie Norwood with regard to a possible appointment to the United States Naval Academy, Stephen promised Congressman Norwood he would not only make him proud by graduating the Academy, but would also serve at least twenty years in the military. Stephen has kept that promise. His “Watch” is over. Now Lt. Col. Ray, Stephen has retired from active duty in the United States Marine Corps after twenty years of service to his country.

What a career it was. Stephen led Marines in multiple war zones and has served his country by risking his life so that we all may remain free. Upon graduation from the Academy, Stephen was commissioned a Second Lieutenant in the Marine Corps. He completed Infantry Officers Training and was assigned to 3rd Battalion, 6th Marines, in Camp Lejeune, NC, as a Rifle Platoon Commander. He soon deployed to Afghanistan in support of Operation Enduring Freedom.

Soon after returning from Afghanistan, Stephen was assigned as the Weapons Company Executive Officer and deployed to Iraq in support of Operation Iraqi Freedom. After his service in Iraq, now a First Lieutenant, Ray was transferred to 1st Fleet Antiterrorism Security Team, Marine Corps Security Force Battalion in Norfolk, VA, and was soon deployed to Rota, Spain to provide a ready, regional security force for the European and African theaters.

Stephen was promoted to Captain, and served a brief stint as a training officer, but was soon assigned to 2d Light Armored Reconnaissance Battalion in Camp Lejeune, and was again deployed to a dangerous part of the world, going again to Afghanistan, and served as the Battalion Operations Officer as well as the Battalion Executive Officer.

In May of 2019, Stephen was promoted to Lieutenant Colonel, and was reassigned to be the Assistant Officer in Charge, Expeditionary Operations Training Group, II Marine Expeditionary Force in Camp Lejeune.

After his retirement ceremony, a number of the men he led in battle in various war zones gathered to pay tribute to his loyalty and leadership. The stories they told were chilling, but revealed the devotion and respect they have for Lt. Col. Ray. One commented that he never goes to “these ceremonies,” but could not miss this one. Several drove long distances to be present and pay their respects. They admired Stephen’s leadership, but also were endeared to him because he let them do their jobs. And finally, his former Staff Sergeant said, “And you brought us all home.” They all agreed that if called again to battle, they would go without hesitation if they could go together and be under the leadership of Stephen Ray.

Stephen is the son of Dr. James L. and Harriett Ray, and brother of David, Marty, and Andy. He is a 1998 graduate of David Emanuel Academy. Stephen has been married for 17 years to Erica Bunk Ray, and they have three children, Scarlett, Jackson, and Violet.