A Thanksgiving To Remember: Thankful Hearts at Emanuel County Courthouse

Judge Reeves officiates 17 adoptions on day prior to Thanksgiving holiday 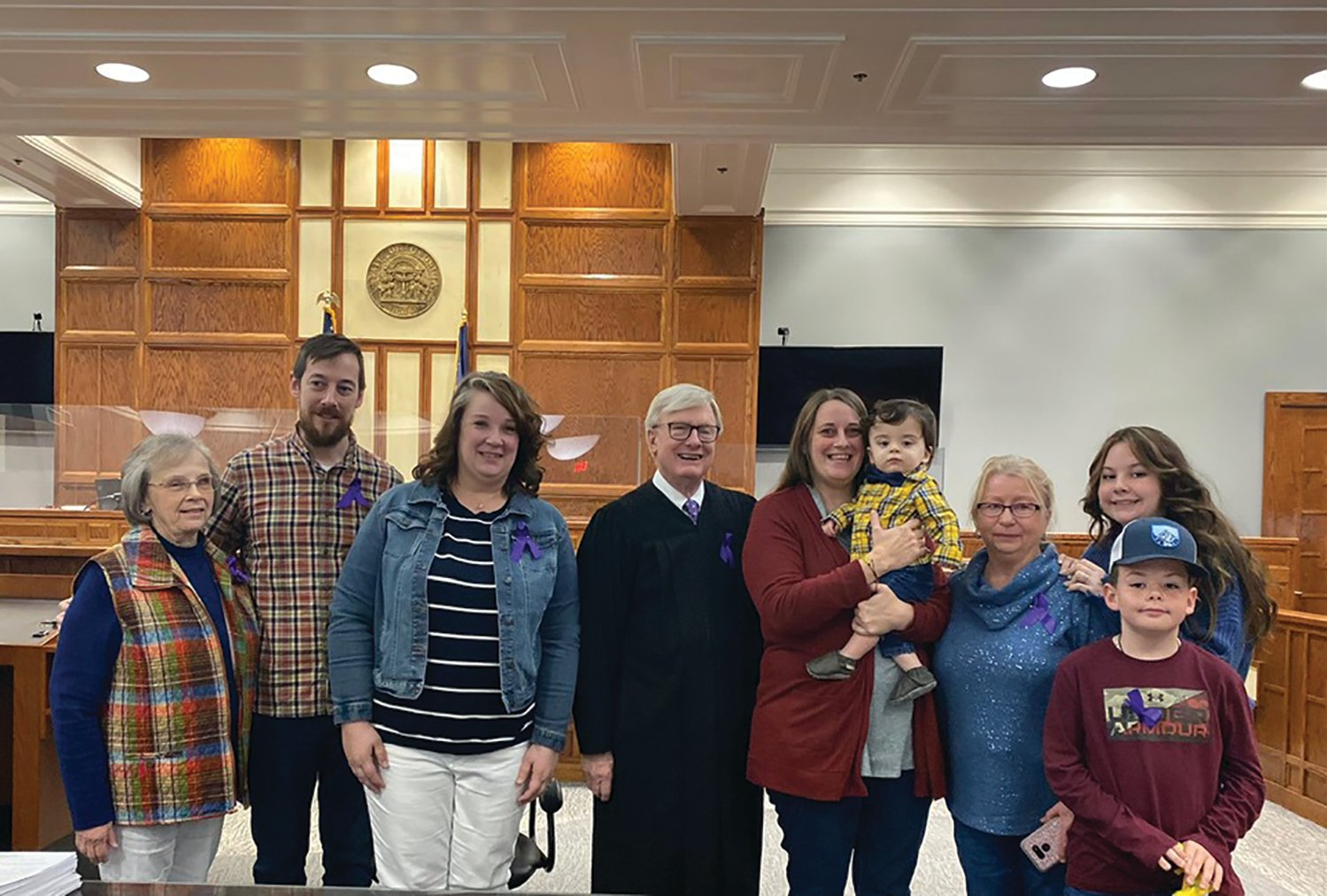 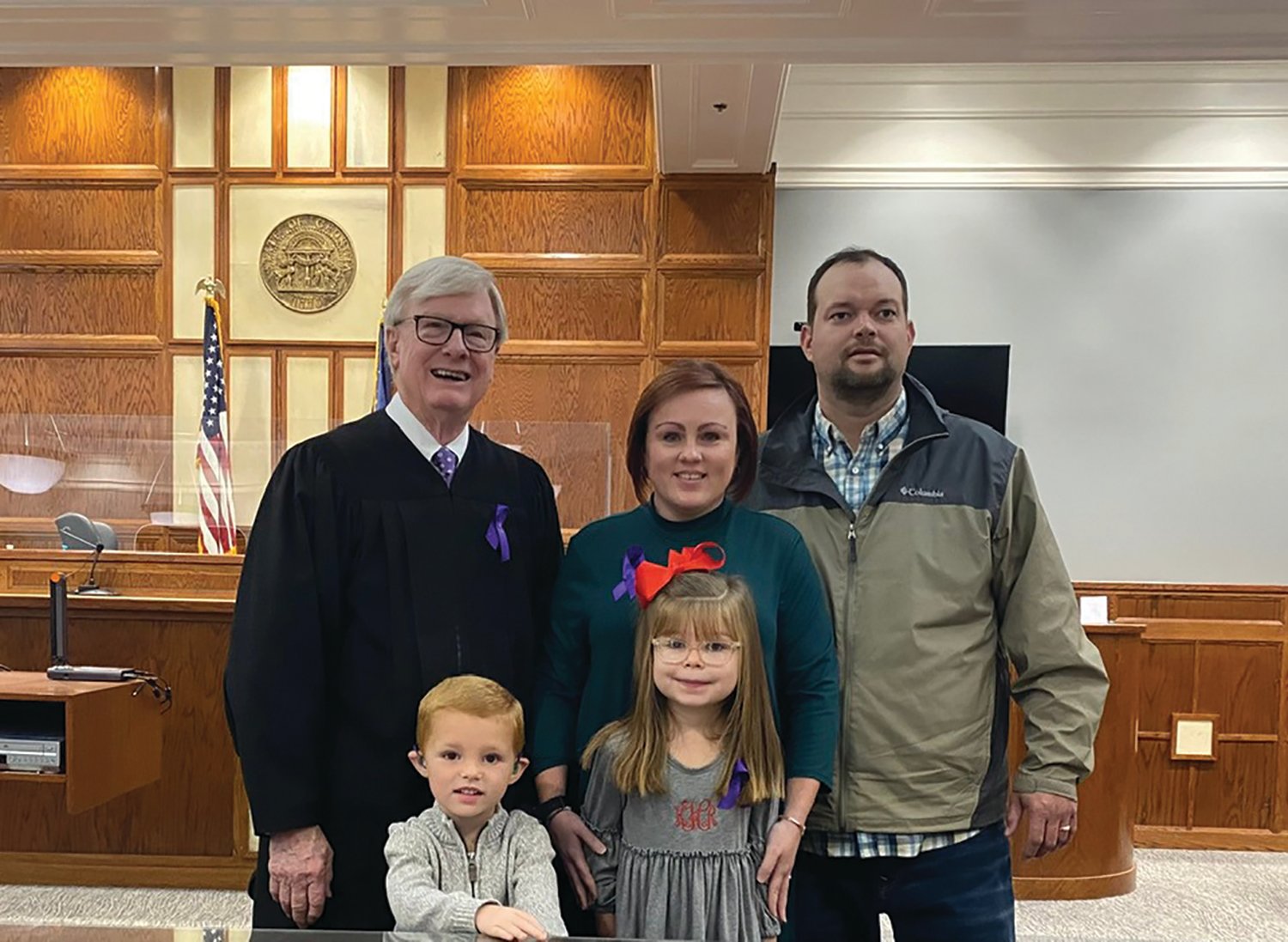 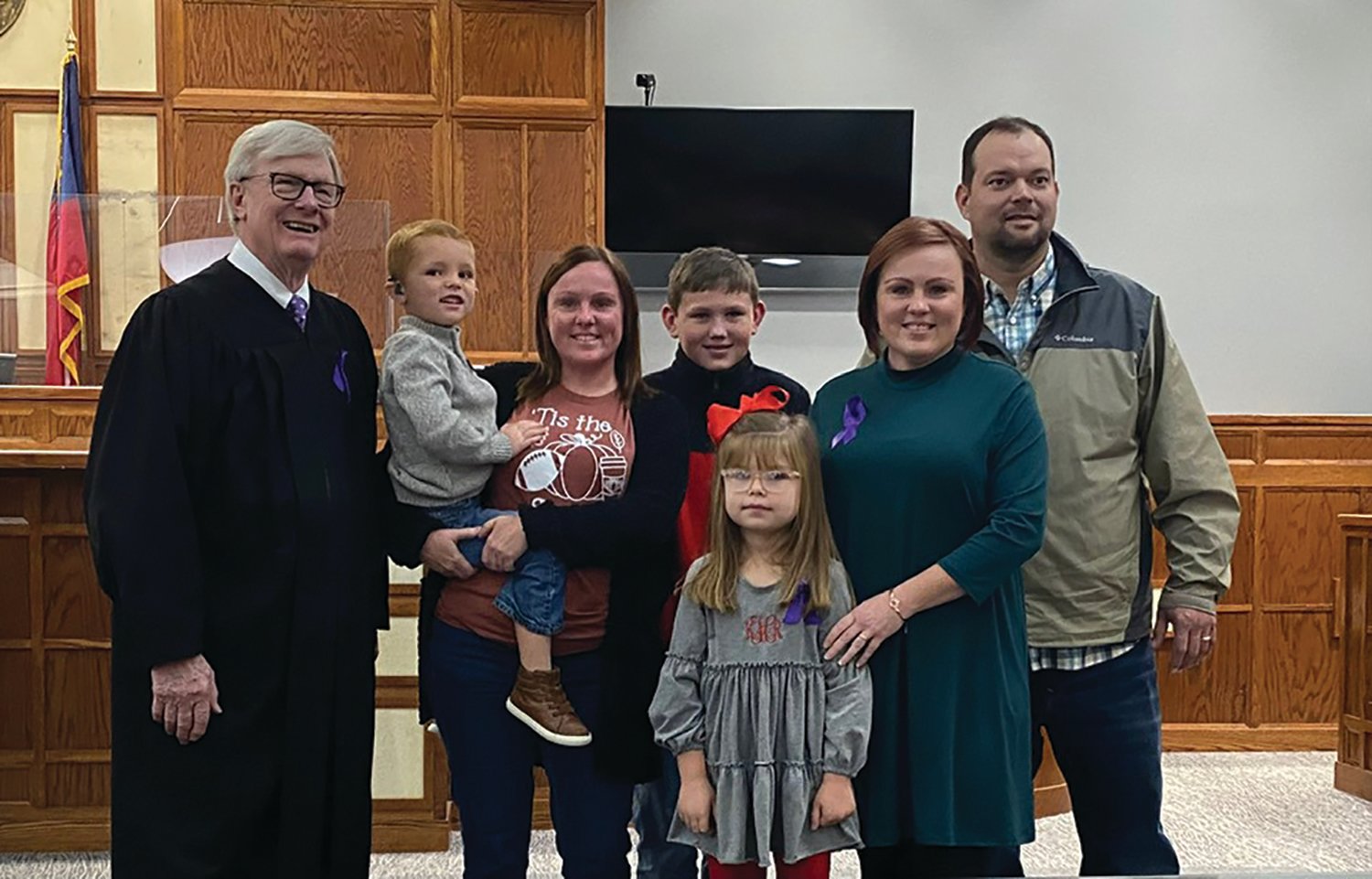 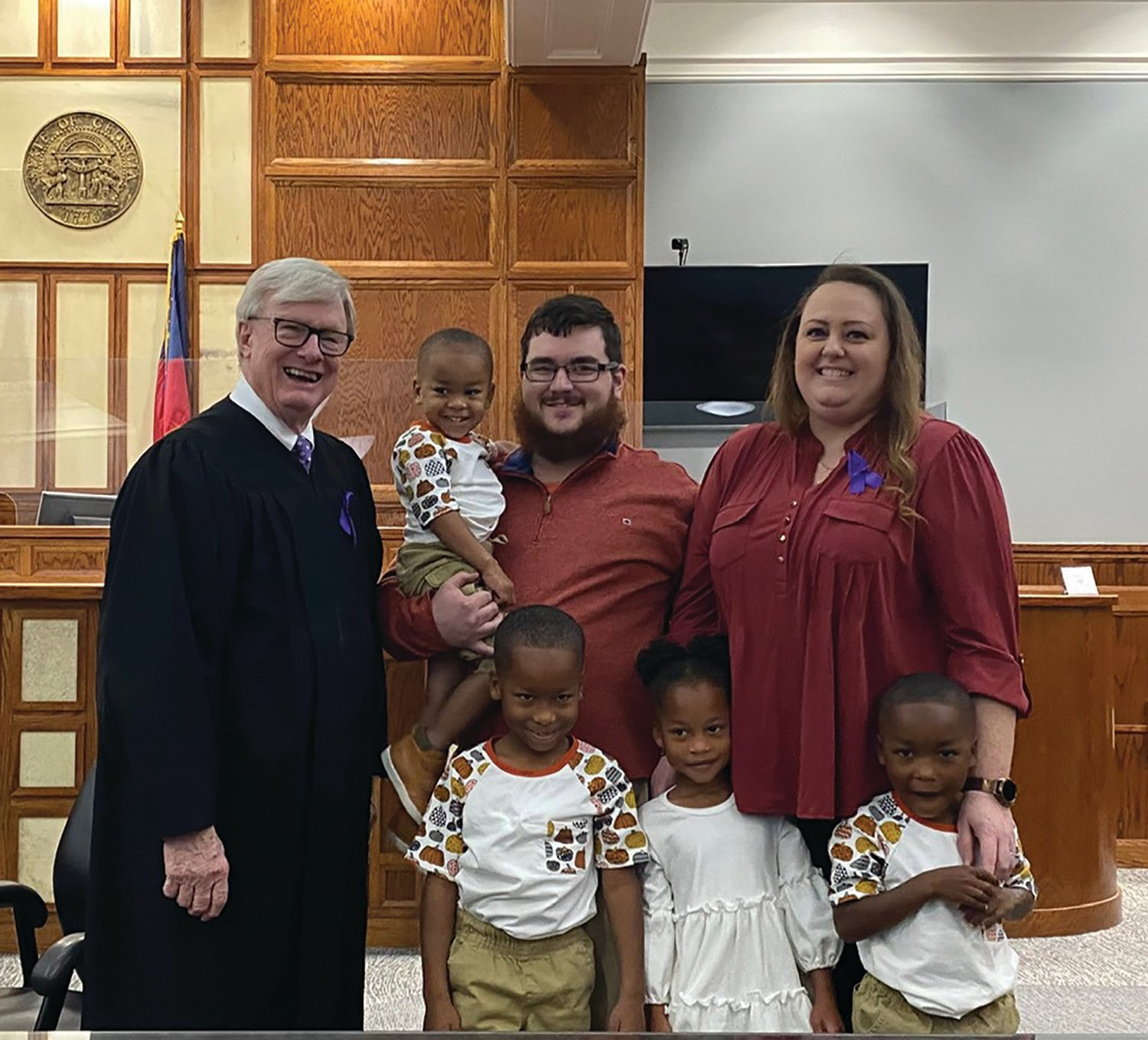 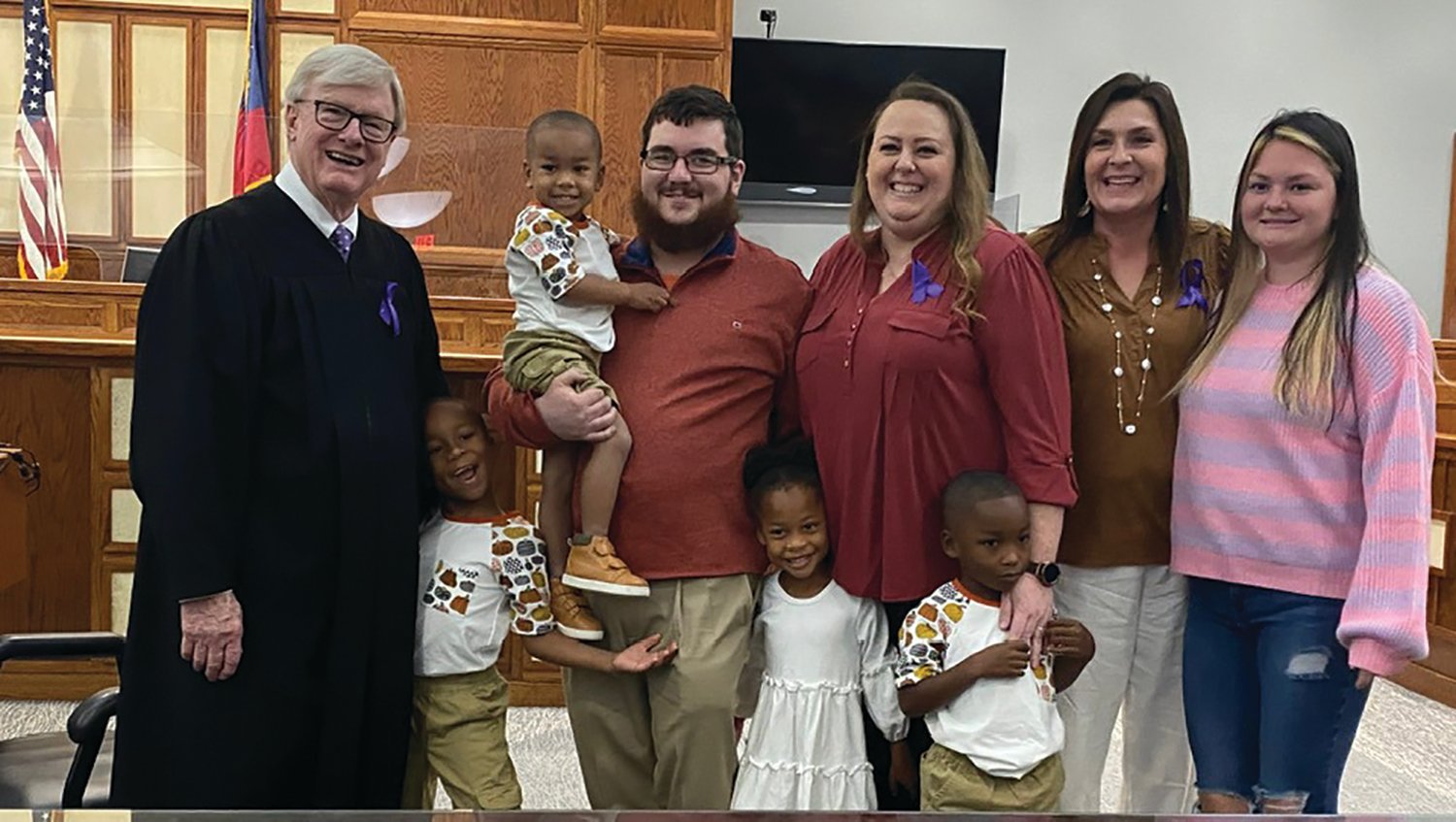 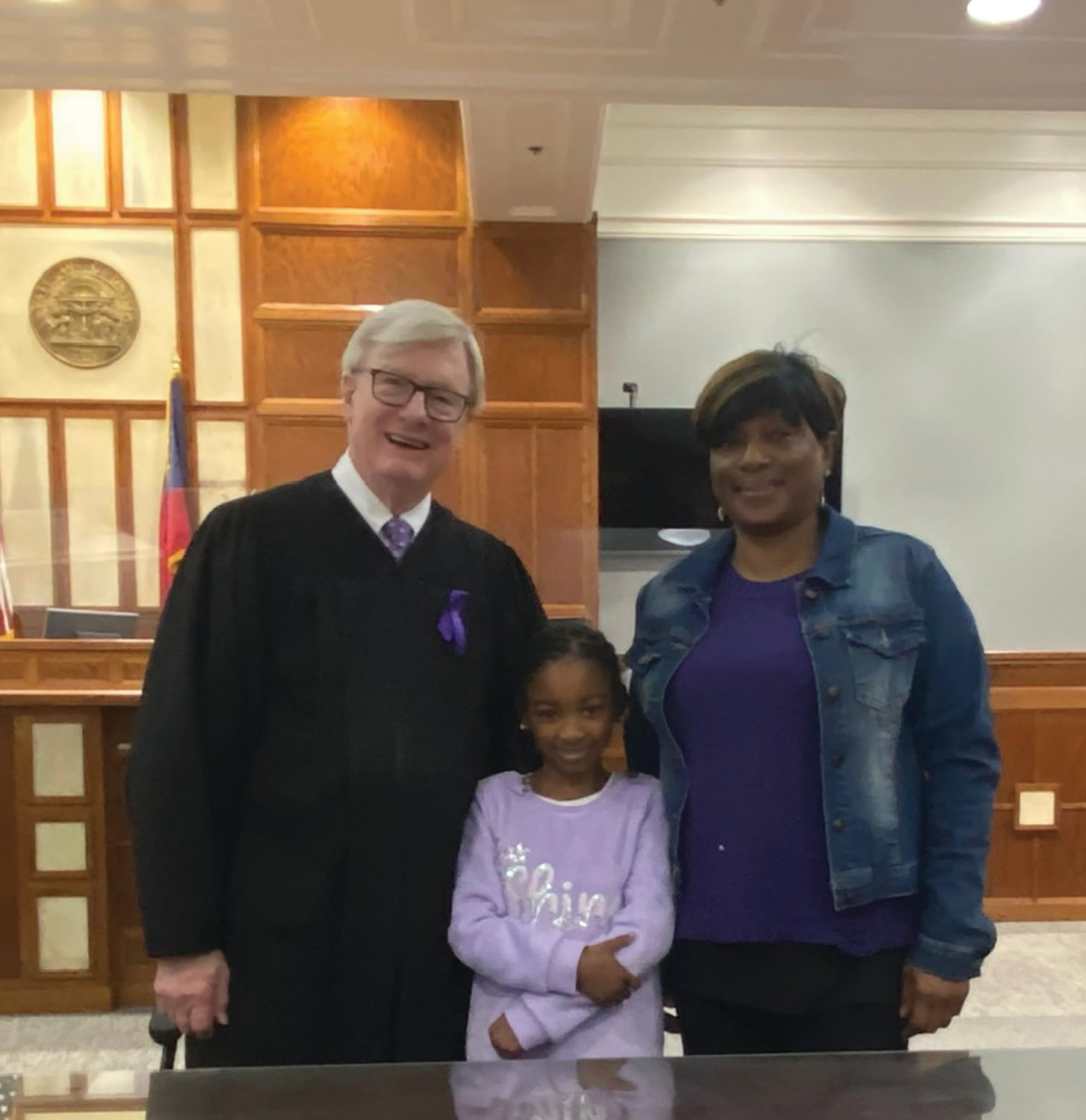 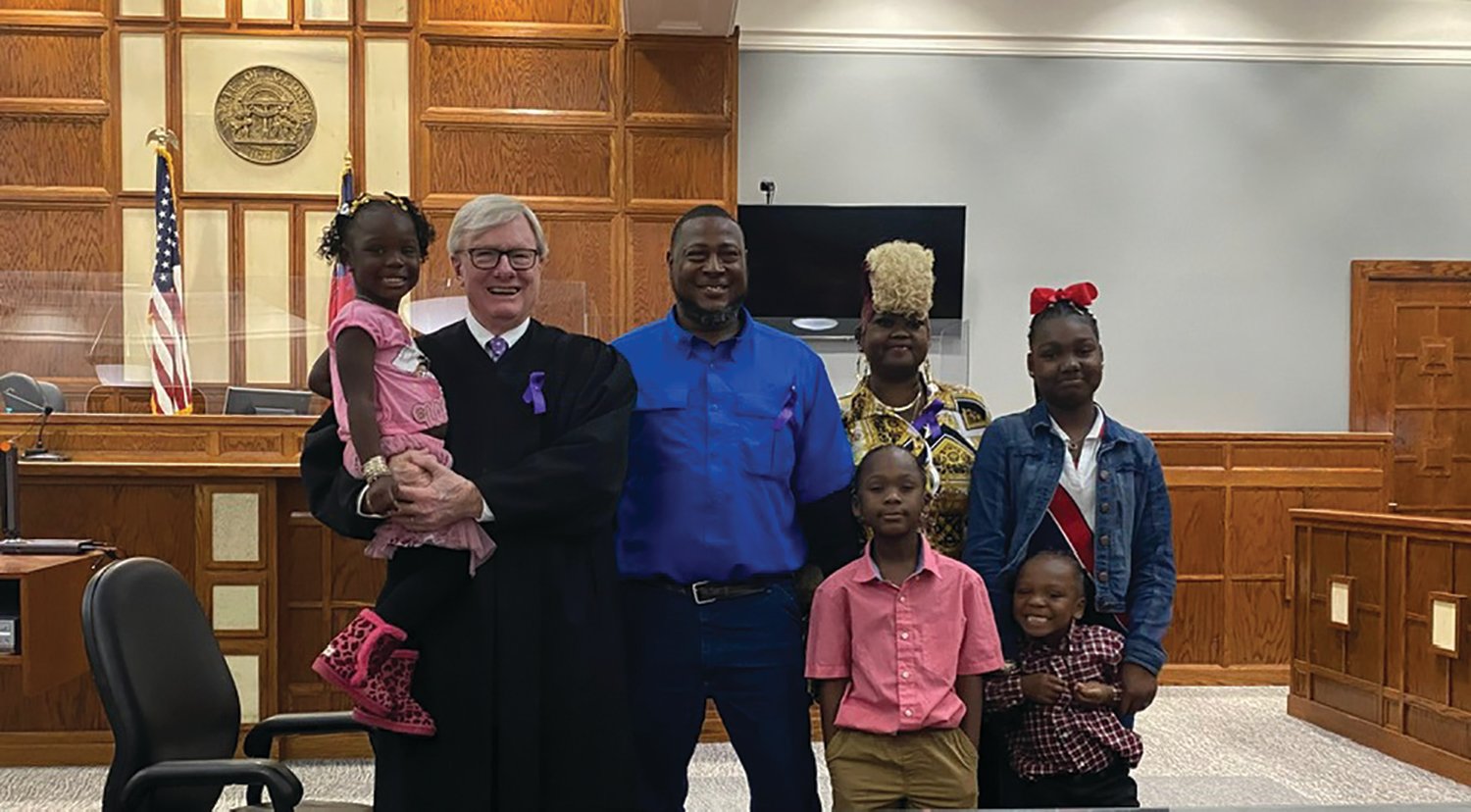 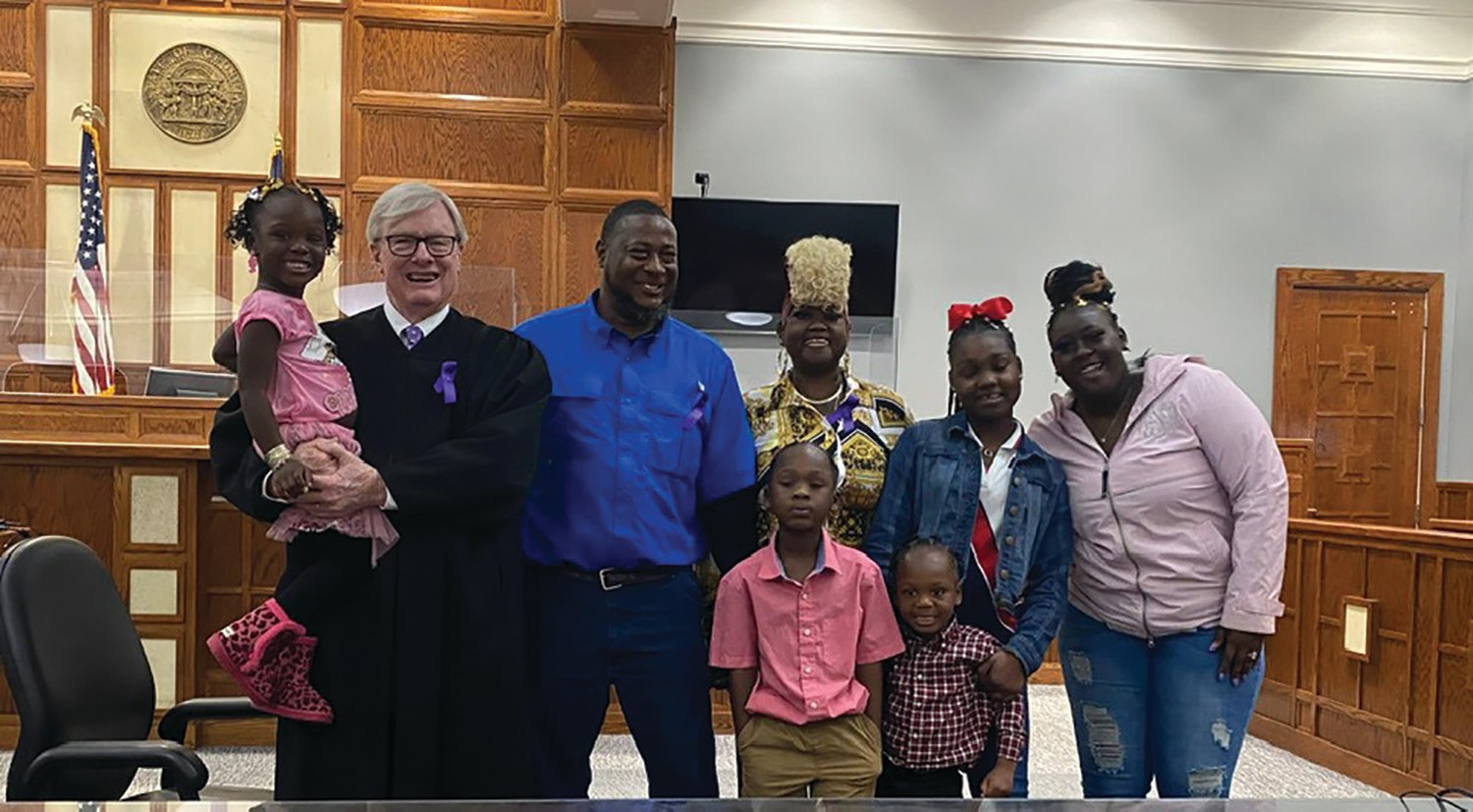 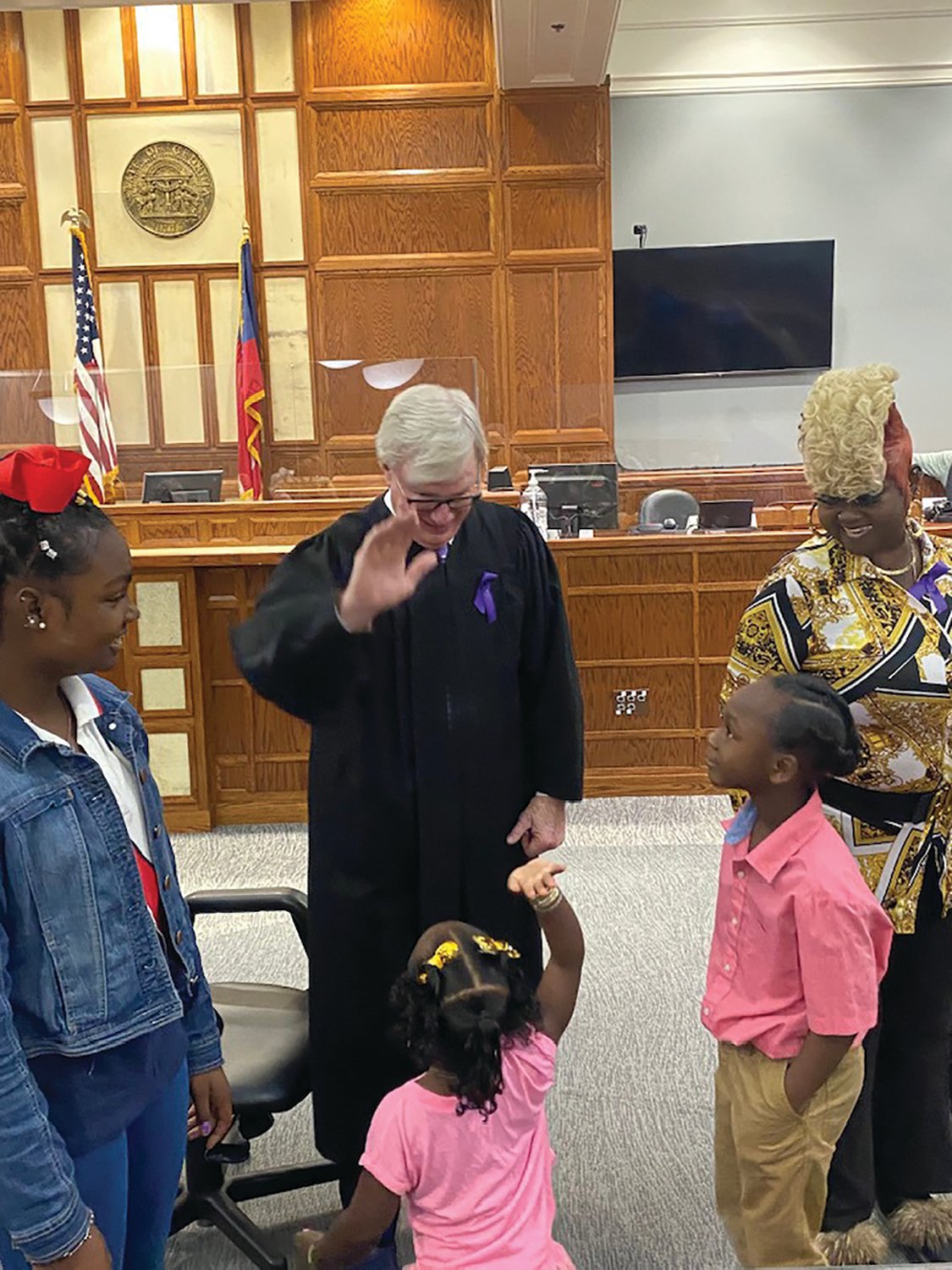 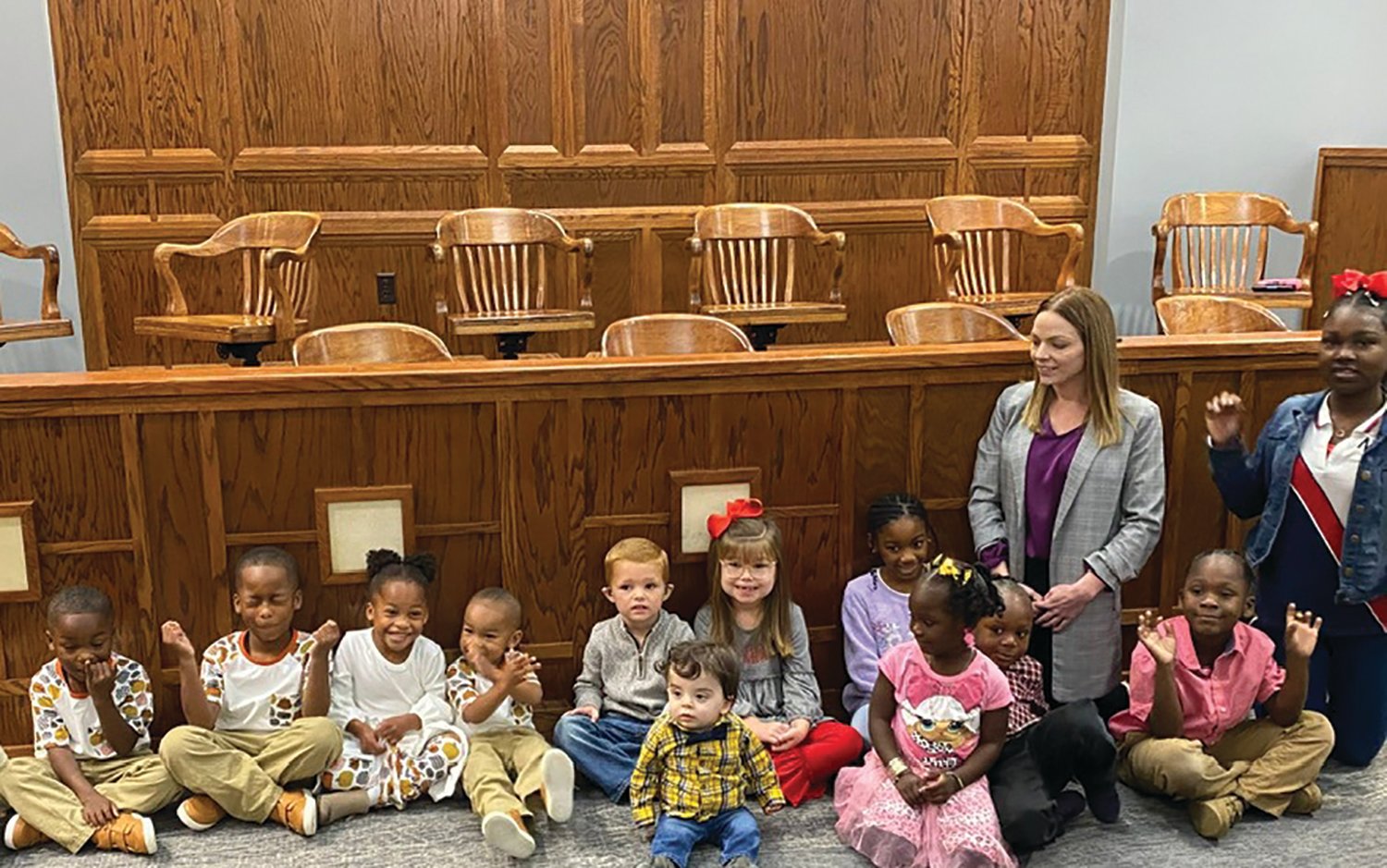 Previous Next
Posted Wednesday, December 1, 2021 6:00 am
by WHITLEY CLIFTON

Wednesday, November 24, made for a perfect start of the Thanksgiving holiday for some pretty special children and their new families. On this particular day, in honor of National Adoption Month, a total of 17 adoptions were finalized for foster children in Georgia’s Division of Family and Children Services (DFCS) Region 9 jurisdiction. Region 9 is compiled of 18 counties, including Appling, Bleckley, Candler, Dodge, Emanuel, Evans, Jeff Davis, Johnson, Laurens, Montgomery, Pulaski, Tattnall, Telfair, Toombs, Treutlen, Wayne, Wheeler and Wilcox. According to information released last week, the majority of the 17 adopted children were from Emanuel and Candler Counties. Officiating the large number of adoptions was the Honorable Superior Court Judge Robert S. “Bobby” Reeves, who was just as thrilled over the opportunity as those involved.

“Obviously, adoptions are one of the fun things a Superior Court Judge has the opportunity to preside over compared to other job duties such as divorces, criminal trials and prison sentences. Adoptions are always a fun, fun thing for us,” Judge Reeves commented.

The excitement in the air was not just heard by the chattering sounds of joyful bliss coming from the united families last week, it was also felt by other individuals entering and exiting the courthouse on Adoption Day. The hugs, laughter, smiles and, of course, happy tears on almost every face present were contagious and brought much glee to everyone around.

“November 24, 2021, was as close to a perfect day as one could hope, and I am so happy to share it with our community. Seventeen children received forever families today, and that certainly calls for a celebration” stated Shea Sherrod, Foster Care Supervisor for Emanuel and Candler Counties.

“There were many adoptions to take place today, with some adoptions involving multiple siblings. There was a grandfather present who said he had prayed for one granddaughter and he got three. Right after he told me that, one of his newly adopted granddaughters leaned forward to the man and said ‘Papa, Papa!’. He took her in his arms and they both beamed with true happiness. To see that grandfather who’s prayed for one granddaughter and now has three – it was truly a thrilling and very gratifying experience to witness,” said Judge Reeves.

Judge Reeves, thinking of the youth he serves, feels that it is important to allow children to engage in the adoption process to make it that much more memorable for not just the adoptive parents, but for the involved youth, too. In fact, the judge’s natural motive in the courtroom corresponded well with this year’s Adoption Month theme, Every Conversation Matters.

With a focal point on teen adoptions, the Children’s Bureau (CB), a U.S. Government organization that focuses exclusively on improving the lives of children and families, sought to increase national awareness of adoption issues, the need for adoptive teen families in the U.S. foster care system and emphasize the value of youth engagement.

Teenagers in foster care usually wait longer for permanent placements and often are at higher risk of aging out than younger foster children. Teens need love, support and a sense of belonging that comes with being a part of a family. Securing connections with teenagers as well as all other youth ages is critical in determining their future achievements, health and well-being. To secure that lifelong bond with any child requires conversation and time together. Incorporating youth engagement into a daily routine starts with a simple conversation.

“I try to engage the children in the process and I’ll even ask the older ones who can understand, ‘Now, is this a good idea?’ and, of course, the answer is always yes. But, I try to make them feel as if their voices are heard. I like to include the children to make it that much more special and for them to know, ‘Hey, the judge listened to me!’. I try to make it lively and fun and an uplifting experience, even if it’s just one or two adoptions taking place,” the judge further explained. “When the children realize that I’m signing that piece of paper and know they’re getting a forever home and their name has changed – they just light up! It’s a wonderful thing to see their faces light up when they know that is has finally happened.”

National Adoption Month is an initiative of the Children's Bureau that seeks to increase national awareness of adoption issues, bring attention to the need for adoptive families for teens in the U.S. foster care system, and emphasize the value of youth engagement.

The Georgia Division of Family & Children Services (DFCS) investigates reports of child abuse; finds foster and adoptive homes for abused and neglected children; issues SNAP, Medicaid and TANF; helps out-of-work parents get back on their feet; and provides numerous support services and innovative programs to help families in need.

The Superior Court of Emanuel County serves citizens and parties through civil and criminal matters designated to the Superior Court by Georgia law. Superior Court Judges preside over all court matters in the Superior Court. The court handles all felony criminal cases, including death penalty cases, and works with the District Attorney and Public Defender to facilitate the processing of those cases. The following type cases are heard in the Superior Court, along with others that may not be listed: Adoptions, Child Support, Custody, Divorces, Family Violence and Protective Orders, Parental Rights, Name Changes, Other Civil Suits, Garnishments, and Felony Criminal Records.