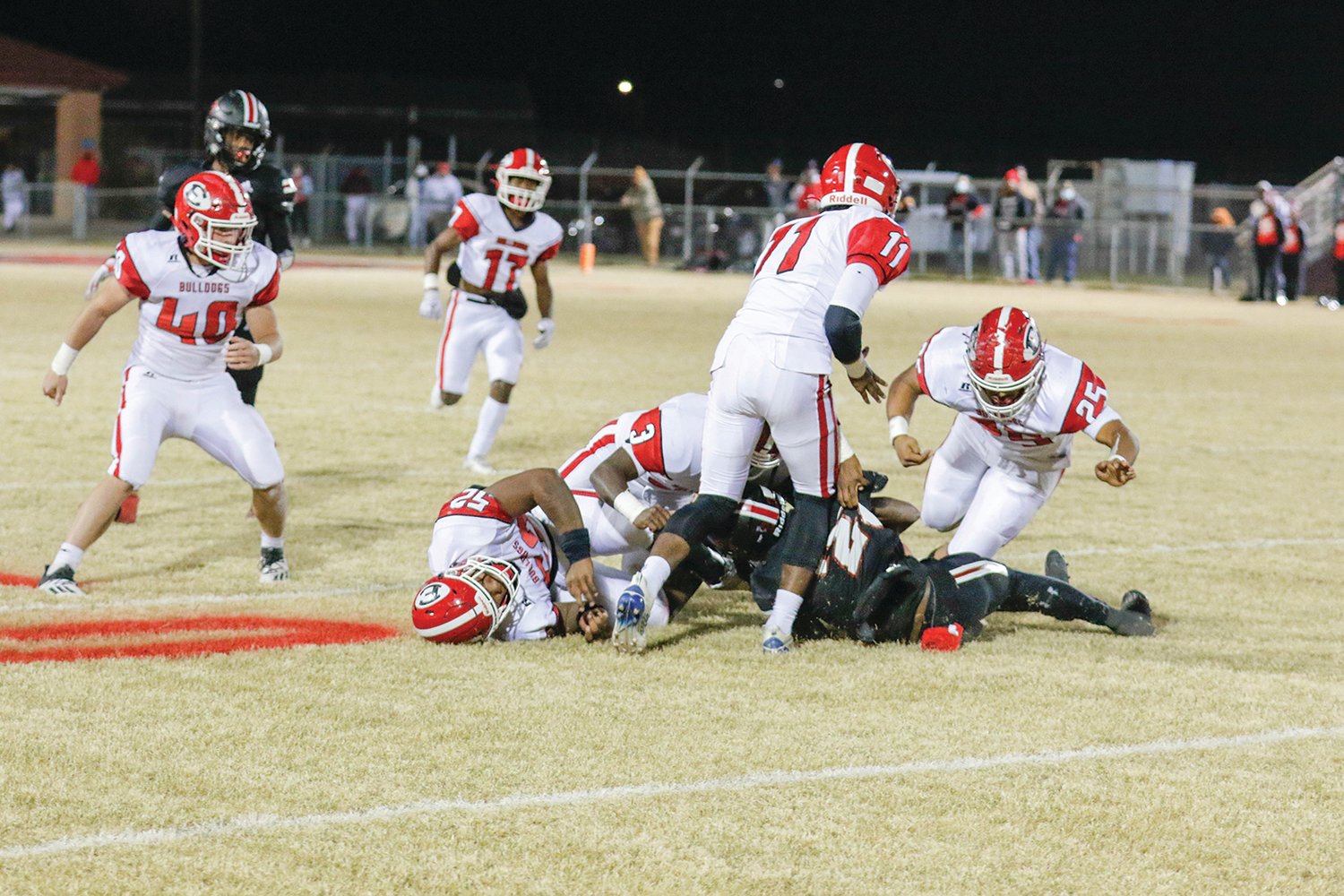 Macon fielded a fast defense who tackled well on the perimeters forcing the Bulldogs to get most of their yards between the tackles.

Like the headline indicated, it was a tale of two halves for ECI. The first half ended with Macon Co. leading 14-10 with the stats for each team separated by just 50 yards.

The second half would be a different story with Macon Co. pulling away from ECI, scoring 28 unanswered points, to advance to the Elite 8 of the state playoffs.

This time of the year a lot of teams are not at full strength and that was the case for ECI Friday missing 4 starters against Macon Co.

ECI opened the game driving from their own 28 to midfield but got bogged down after 3 penalties put them way behind the chains forcing a punt.

It would be two big plays that propelled Macon Co. to the lead in the first half. The first after a 56 yard run to the ECI three yard line on the seventh play of their initial drive to set up their first score to lead 7-0.

The Bulldogs would tie the game on their third possession of the game. Bryce Kearson hit tight end Jack Walden in the middle of the field for a 47 yard touchdown pass and catch for a 7-7 tie with 2:51 left in the first quarter.

The Bulldogs would take the lead in the second quarter after forcing a Macon Co. fumble to put ECI in business at their own 44.

ECI drove to the Macon 8 before being pushed back to the 15 on a quarterback scramble on third down. Oisin Matthews split the uprights on the field goal try to put the Bulldogs in the lead 10-7 with 6:39 left in the half.

It would be Macon’s second big play of the half that put the home Bulldogs up 14-10. The senior quarterback hit one of his four wideouts on the play who outraced the Bulldog defenders for a 60 yard touchdown to put Macon Co. up for good 14-10 with 1:23 left in the half.

After Macon received the kickoff to start the second half, the Bulldog defense forced their second turnover of the game on another fumble to give the ball back to the offense at the Macon 31 yard line.

Giving up big plays would continue to haunt the ECI defense in the second half. Macon Co. would either score and setup scoring plays on long runs or passes.

The hometown Bulldogs started to pull away scoring 14 points each in the third and fourth quarters.

ECI got into the Macon Co. red zone twice in the second half but were turned away on downs to end their two scoring threats.

The Bulldogs rushed for 160 yards, (109 in the second half), against the third ranked Macon Co. team along with 113 through the air.

Kearson was 9-13 passing and one touchdown for 113 yards. Jack Walden, 3 catches for 85 yards and Hudson Henry 3 for 28 yards led in the receiving department.

When you have a so-so year, you look to improve, and the Bulldogs did just that this season. They had a disappointing 2020 season where they missed the playoffs for the first time in 17 years, going 5-5 with a 3-4 region record. The Bulldogs improved this season with a 9-3 record, 6-1 in region, advancing to the sweet 16 of the state playoffs. Two of their loses were to the third and fourth ranked teams in class A who advanced to the Elite 8.

When asked about this season, head football coach Chris Kearson had this to say about the team and this year’s seniors. “Most seasons end in a disappointing fashion unless you win the last game. But to see where this group has come in the last two years has been short of amazing. They are winners in my book because they’ve put our program back on tracks. I can’t lie, we’re going to dearly miss this senior class. They’re a great group of young men who led us to 9 wins this season. I look for them to do big things in life after high school."