; The Mighty Eighth: The decisive force against Nazi Germany

The Mighty Eighth: The decisive force against Nazi Germany 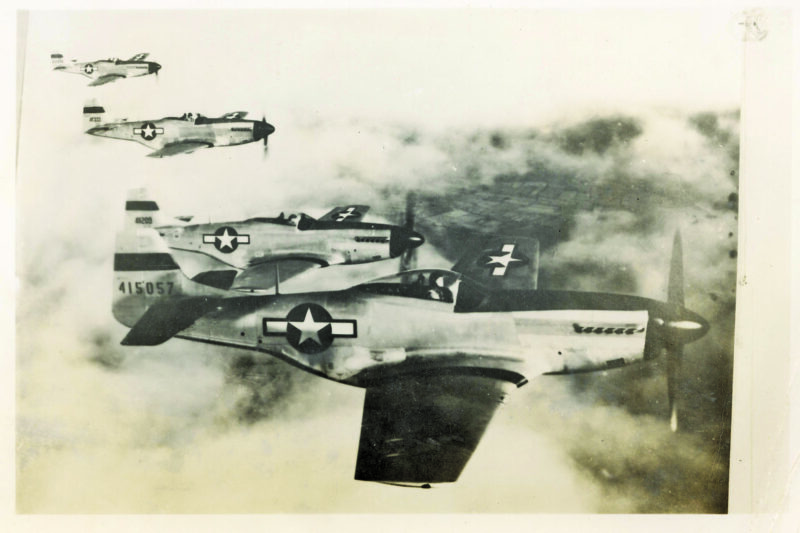 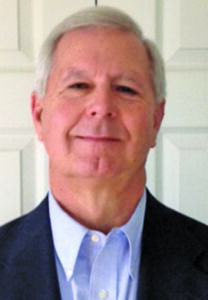 On May 8 a mere 75 years ago, virtually the entire world took a massive, collective sigh of relief. That was the long anticipated day when the surviving leadership of Nazi Germany accepted President Franklin Roosevelt’s demand of “unconditional surrender” shortly after Adolf Hitler killed himself. Known as VE Day, it commemorates Victory in Europe during World War II and celebrates the liberation of Western Europe from the tyranny of Adolf Hitler and the Nazis.

Without question, one of the most powerful instruments employed by the Allies to achieve their total victory was the U.S. Eighth Air Force, formed in Savannah in January of 1942 after the Japanese attack on Pearl Harbor forced the U.S. to enter the war.  The Mighty Eighth grew to represent air power on a scale never before imagined and never to be equaled.

It is almost beyond comprehension that with good weather conditions, by the spring of 1944 the Americans could put 2000 bombers and 1000 fighters into the sky on a single day for missions over Germany. This was an air traffic control problem never previously imagined and mid-air collisions were considered an acceptable hazard of the trade. The result of air power of this magnitude was that by the end of the war, German industry and transportation, and every major city, laid in ruins.

There were 71 bomber and fighter bases established in the area to the North and East of London known as East Anglia. The terrain was flat and close to the English Channel, making it ideal for the many home bases of the big four engine bombers– the legendary B-17 Flying Fortresses and B-24 Liberators.

Almost 350,000 Americans served in the Mighty Eighth in what was called the “friendly invasion” by the Brits. To this day East Anglia remains by far the most Americanized part of Britain, still reflecting the cultural shock of suddenly being overrun by thousands of young Americans. By 1944, the diaries of numerous East Anglian civilians changed from a gloomy tone to one of confidence in final victory as they witnessed these massive American air armadas assemble and then head out over the Chanel for deadly serious business against the Nazis.

The invention of the state of the art “Norden Bombsight”, that era’s equivalent of today’s smart bombs, had led President Roosevelt and American war planners to embrace a totally new use for air power. The concept of “strategic bombing” was developed. The novel idea that air power would not just be used to attack enemy military positions (tactical bombing), but would be deployed with overwhelming force to degrade the enemies’ means of production, transportation, and energy. In other words, destroy the ability of your enemy to effectively wage war.

Within months after being formed, the Mighty Eighth had spread all over the country for the needed task of training thousands of pilots, navigators, and bombardiers to man the thousands of planes that the American “arsenal of democracy” was soon to produce and send into battle. It started as a trickle that eventually turned into a stampede, and by August of 1942, the first small cautious mission was flown by 8th AF bombers led by Paul Tibbets, the man who three years later would fly the B-29 that dropped the atomic bomb over Hiroshima.

By 1943, the Mighty Eighth was flying frequent missions deep into the heart of Germany, going after all of the components of the German war machine. However, as these dangerous missions attacked further into Germany, the casualty rate reached unsustainable levels. The infamous August 17, 1943 raid against the ball bearing and Messerschmitt airplane factories in Schweinfurt and Regensburg graphically exposed how bad the losses could be when sending unprotected bombers on a long range mission against a heavily defended target. The attacking force of over 300 bombers lost 60 planes, each with a ten man crew, and another almost 100 bombers suffered extensive battle damage.

The primary problem that had to be addressed was the lack of fighter plane protection against the very effective German Luftwaffe fighters and their experienced pilots. American fighter protection for 8th AF bombers stopped far short of Germany because the fighters would run low on fuel and be forced to return to their bases in Britain. In late 1943, the 8th AF suspended long range missions temporarily until a solution appeared. 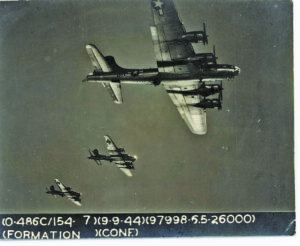 Fortunately, by early 1944, that solution began to show up in force. The next generation American fighter plane, the magnificent P-51 Mustang, had come to the rescue. The P-51, equipped with long range fuel tanks, could escort the B-17’s and B-24’s all the way to target and back.

By the spring of 1944, the Mighty Eighth turned its attention to the destruction of the German Luftwaffe. With the D-Day invasion planned for June, it was imperative that the Luftwaffe be crippled so that any Allied soldier on the beaches in Normandy who looked up into the skies would see only friendly aircraft.

The “strategic bombing” campaign never completely eliminated German industrial production, but by early 1944, production had stopped increasing, and by that summer it began a downward spiral such that by 1945 war production was virtually nonexistent. Continuous bombing raids in 1944 against Nazi synthetic fuel facilities and oil refineries made the strict rationing of fuel mandatory. This seriously limited the training of new pilots and tank crews, and eventually even front line pilots and crews were forced to curtail operations because of fuel shortages.

Besides destroying military and industrial targets, the Mighty Eighth’s “strategic bombing” campaign had three additional major effects on the outcome of the war.

First, the German “88” was recognized as the best artillery, anti-tank, and anti-aircraft gun of WWII. In 1943 the Germans began to strip their armies of their “88’s” at an accelerating pace in order to defend their cities with 55,000 anti-aircraft guns. This caused incalculable damage to the fighting abilities of their armies, especially on the Russian front with its huge tank battles.

Second, by late 1943, 70% of German fighters were deployed to defend the homeland against “strategic” bombing, rather than supporting their armies in the field. This put the German armies at a substantial disadvantage to their thoroughly air supported foes—the American, British, and Russian armies.

And lastly, 1.5 million German personnel were assigned to air defense duty against Allied bombing. Every other theater of the war would have been tougher if many of these personnel had been available for other combat duty. 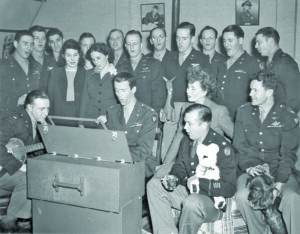 The Mighty Eighth was blessed with some famous personalities that history fondly recalls. General Jimmy Doolittle, of the daring 1942 Doolittle raid over Tokyo, was the commanding officer from January, 1944 to the German surrender. The Academy Award winning actor, Jimmy Stewart, and the legendary Dallas Cowboy football coach, Tom Landry, were squadron leaders on numerous perilous missions. Even the great actor from “Gone With the Wind”, Clark Gable, flew some missions as a gunner and photographer.

The explicit strategy of the Mighty Eighth was the strategic bombing of German military and industrial targets. In order to effectively implement this strategy, the American high command decided they must fly daylight bombing missions so that the bombing would be accurate enough to hit most of the intended military and industrial targets. The British considered daylight missions too dangerous and the number of lost planes and crew too high to be acceptable. Thus, the British strategy became night bombing.

Let no one misunderstand this fact: American bombers flew the more hazardous daylight missions over Germany, exposing their gallant crews to greater danger from German fighter planes and anti-aircraft guns, for the specific purpose of making their bombing of military and industrial targets more accurate and minimizing the inevitable civilian casualties.

In recent years, a few historical revisionists have questioned the morality of the Mighty Eighth’s devastating bombing campaign in WWII. Because most German cities were destroyed and hundreds of thousands of German civilians were killed as collateral damage, it has even been called a war crime.

These misguided souls conveniently forget that during WWII American troops were dying on average at a rate of 9,000 per month and the execution of Jews and others in concentration camps averaged 80,000 per month. Fair, objective historians agree the cold, hard truth was that the first responsibility of Allied leaders was taking whatever action was at their disposal to end the war and stop the loss of Allied lives and innocent Jewish prisoners. Using the heavy bombers of the Mighty Eighth to destroy German industry and cities, and break the will of the Nazis to resist their inevitable defeat, was a morally justifiable use of a powerful tool to bring the war to a faster conclusion.

Did the strategic bombing of Germany cause WWII to end faster than it otherwise would have ended? Virtually the entire German high command that survived the war agreed in post war interviews that Allied bombing and air supremacy was the single greatest cause of German defeat. But the most conclusive evidence of all comes from Albert Speer, the man who was in total charge of every aspect of German military and industrial production from 1942 until the end of the war. He asserted that “the strategic bomber is the cause of all of our setbacks” and referred to strategic bombing as “the greatest lost battle on the German side”.

The price for this victory was high. The Mighty Eighth had the most fatalities of any American military unit in WWII—26,000, with another 25,000 taken prisoner. WWII was the worst cataclysm in human history, but the ultimate Allied victory determined that the second half of the twentieth century would be dominated by freedom and democracy, not dictatorship and enslavement.

A visit to the Mighty Eighth Heritage Museum in Savannah is a trip to sacred ground. It is an emotional experience to reflect on the somber plaques placed by Mighty Eighth veterans in the memorial gardens to immortalize their crews, to gaze at the original Arlington National Cemetery headstone of Medal of Honor winner Gen. Jimmy Doolittle, to inspect a restored B-17, and to experience what it was like to fly a harrowing WWII mission over Germany in the “Mission Experience” virtual reality exhibit.

The 8th AF was but one of the many vital components of the “greatest generation” that won the essential victory in WWII. However, the brave and resolute crewmen of the Mighty Eighth earned the honor of being remembered as the unstoppable force that delivered the decisive blow against the Nazis.

Eric Hogan is a long-time resident of Tybee Island. He is a graduate of Georgia Tech and Mercer Law School, and he is an amateur historian of World War II. He can be reached at rhoganjr71@aol.com. His wife, Roxy Wimberly Hogan, was born and raised in Swainsboro. Her sister is Leck Boatright of Citizens Bank.