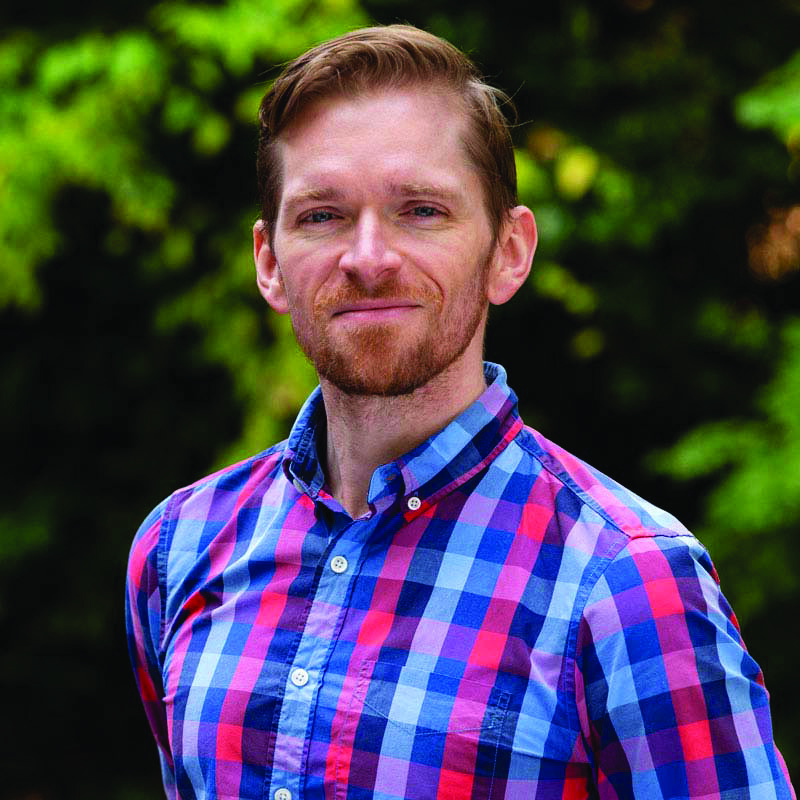 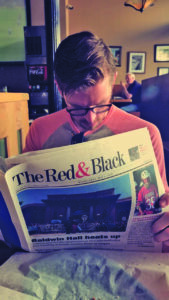 Clarke Schwabe, Jerry Tanner—doesn’t matter which one you call him. All you need to know is he makes a real difference at the University of Georgia. From writing seven-figure gift proposals to amping up Bulldog Nation through a YouTube show that’s on the rise, the oldest son of Charles and Jean Schwabe fell in love with UGA years ago and is living every day to repay the institution while making it a better place for higher education to benefit the next generation of students.

After graduating from Swainsboro High School in 2003, Clarke started college at Georgia Southern University. He studied as an Eagle until fall 2005, at which point he journeyed to Athens to complete his degree. He always loved writing, so he chose a major that would feel less like work and more like a passion. He got into the Grady College of Journalism and Mass Communication, eventually started working at The Red and Black, UGA’s student-run, independent campus newspaper, and became a published author in a collection of undergraduate fiction. By the time he graduated cum laude in 2008, Clarke had a plethora of feathers in his cap and an unmatched love for his beloved university as well as its town.

“At first, it was difficult to leave home. I was definitely a mama’s boy growing up, and I was deathly afraid of change. It took some serious poking and prodding from some exceedingly patient friends of mine, but once I got out, I just wanted to see more and more,” he recalled about moving to the Classic City. “Athens was incredible. It was and is big enough that you can find your niche, whoever you are, and small enough that you don’t feel overwhelmed. It’s such a fascinating cultural crossroads, too, that rejuvenates itself every year with a new batch of bright-eyed freshmen.”

After college, Clarke completed an online editorial internship with Bleacher Report, editing user-submitted sports articles from across the globe. In 2011, he was hired at Southeastern Technical College as a PR specialist. As such, he wrote press releases, maintained the college’s website, photographed events, created and placed advertising, and helped run the school’s social media accounts. Four years later, he returned to Athens to work for the Hugh Hodgson School of Music at UGA. For two years, he was again tasked with writing press releases, handling photography needs, running the school’s websites and social media accounts, creating and placing advertising while simultaneously learning a lot about music.

Today, the 34-year-old is a proposal writer with UGA’s Development & Alumni Relations. The title sounds fancy, but his job duties are pretty simple—not to be confused with unimportant or easy. He got linked up with Development & Alumni Relations during his time with the School of Music. Immediately, Clarke knew this was a growing, active division of the university. The communications team, he observed, was young, ambitious, and well-respected. He wanted in, so when a position opened, he jumped at the chance. Luckily, the department took a chance on him, and the decision has, quite literally, paid off.

“I handle proposal writing. Basically, I create documents that illustrate why a giving prospect should give to UGA, how their gift will be used, and the impact it will make—for principal giving at UGA: gifts with a value of seven figures or more. I also manage a suite of online tools that fundraisers across the university can use to make their own high-caliber proposals.” 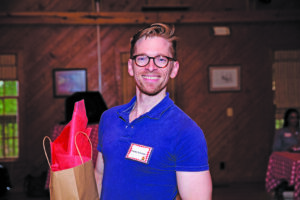 In his role as a proposal writer, Clarke has helped fundraisers secure millions of dollars in gifts to the university. He says it is “incredibly gratifying” to see not just how people believe in the university’s mission enough to give these enormous sums, but how those gifts absolutely change the lives of so many students. Most people who work in public relations or similar fields are selling something. Clarke isn’t an exception; he is, in essence, selling the University of Georgia. He has an advantage most don’t, though. Selling education, improvement, ambition—dreams, really—is the easy part.

“There’s no moment where I have to feel like I’m trying to get someone to spend money on something they don’t need. I have the luxury of being able to say, ‘Look, this student’s future is completely different and full of potential because of your generosity.’ That’s what sets my job apart from everybody else in PR.”

The difficult part is asking people to part ways with large sums of money, no matter how it’s pitched. Clearing the appropriate levels of approval can be challenging, too, but seeing the difference in the end makes up for the stress tenfold.

In addition to his proposal-related tasks, Clarke handles various additional communications tasks as needed, like writing press releases (a skill he has perfected by now), gift announcements, and blog posts, and helping with video shoots and graphic design tasks. Perhaps favorite of his responsibilities, however, is his brainchild, a project called The Jerry Tanner Show.

Powered by the UGA Alumni Association, the show posts a new episode each UGA football game week. Clarke plays the main character and chronicles the Bulldogs’ previous football game and next match-up, as well as the wider college football world.

“Jerry Tanner [the character] is everyone you’ve ever met at a UGA tailgate, everyone who’s ever talked about Georgia football by your cubicle, and every message board poster who claims to have a cousin who cut Vince Dooley’s grass. I love doing it because it lets me embrace college football—a sport I love—while not taking things too seriously. Ultimately, the whole thing is just a game. It’s entertainment, so why not have fun with it? I think part of what makes college football unique is that it still holds on to that joyful exuberance and revels in outlandishness, the sort of thing that is very tough to come by in the self-serious, focus-tested NFL,” Clarke explained. “Jerry Tanner is my attempt to capture the essence of that feeling, of walking to your tailgate before the game and seeing something crazy being done by someone who’s old enough to know better.”

Phillip Schwabe’s older brother conceived the idea in a communications team meeting. He and his colleagues were searching for crazy, blue-sky ideas to raise awareness about the alumni association. Clarke had been toying with the idea for a while in his head and pitched it. The team thought it sounded interesting, so he got the go-ahead for a few episodes.

“We started making episodes before the season, but we wanted to get all the right people on board, and we knew that would take time, so we just made and stored the first three. By the time the Notre Dame game came around, we knew we would never have more attention on a game than we did on that one, so everyone finally said yes, and we released everything the Friday before that game.” 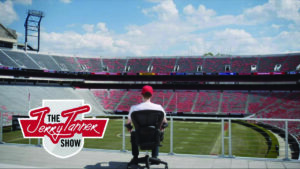 The Jerry Tanner Show finished the 2019 season 15 episodes strong. Its growing fanbase promises a bright future. In addition to making new episodes for the remainder of the Dawgs’ season, Clarke and other producers will be exploring new promotional avenues to try and spread awareness of the series. Growing Jerry Tanner to the point of inviting guests, be it Coach Kirby Smart himself or other connections close to the program, is one goal Clarke and company hope to accomplish. (To follow the show, find “UGA Alumni” on YouTube, then click the bell by any of the videos’ subscribe buttons. This will enable alerts whenever a new video is posted.)

Clarke has garnered a lot of success in Athens both as a student and a professional. The key, he says, is honesty—not just in spoken word but in how the work is approached. “You have to be able to relate to people, no matter what job you do, so be yourself at work. Don’t be a job title. Work is just one part of your life, but it is part of your life, and if you spend that time being someone else, you’re wasting your time. Admit your mistakes, own your personality, empathize with your coworkers. Don’t replace your life with your work, but don’t wall off your real self from your work self. I think it is really important to be your honest self in your work and to be honest about how your work fits into your life.”

For Clarke, work carries a sentimental value, so his day job fits into his life in a big way, but that doesn’t discount the other parts of his life today, which are equally as special. Namely, he loves spending time with his girlfriend, Devin Cifu, exploring Athens, and coming home. 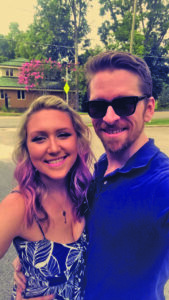 “This past summer, Devin and I helped a friend move from Massachusetts to Milledgeville—by car. We also drove down to Ginnie Springs in Florida. I’ve been a video game fanatic most of my life. Fortunately, Devin is into gaming, too, so we do that together,” Clarke commented. They also frequent Savannah and Statesboro to try out new breweries and cafés, but the couple also enjoys going out in Clarke’s stomping grounds. After all, as his relationship with Athens changes, he continues to find new places and activities.

Because Swainsboro isn’t too far out of the way when he visits Devin in Statesboro, he loves to stop in to see his parents, and he won’t leave town without getting some Ware’s BBQ. Clarke usually returns about twice a month, but for now, Athens is home—and likely will remain such in the future. Now, he says, Swainsboro is an ideal place to visit and while he knows the Crossroads of the Great South is the place of choice for some people, he also realizes that a group of others might be starry-eyed with ambition to see what else life has to offer.

His advice is to go for it. “If you’re thinking about doing it, you owe it to yourself to see. If you go out and it’s not what you thought it would be, at least you can come home and feel good knowing that you gave it a shot. The alternative is doing nothing and never answering that question for yourself, which will hang over you for a long time.”

He also has an important message for those who choose to stay. “Every last person in Emanuel County has so much more in common than you know. Everyone you see—at the football game, at Walmart, out in the country, at the gas station—is just trying to do the best they can for them and theirs. Trust in that knowledge before you believe anything else. Everything good that comes out of Emanuel County comes from people working together and being together. Do what you can to help one another and believe the best of everyone around you. Them, you, me—we’re all doing the best we can.”