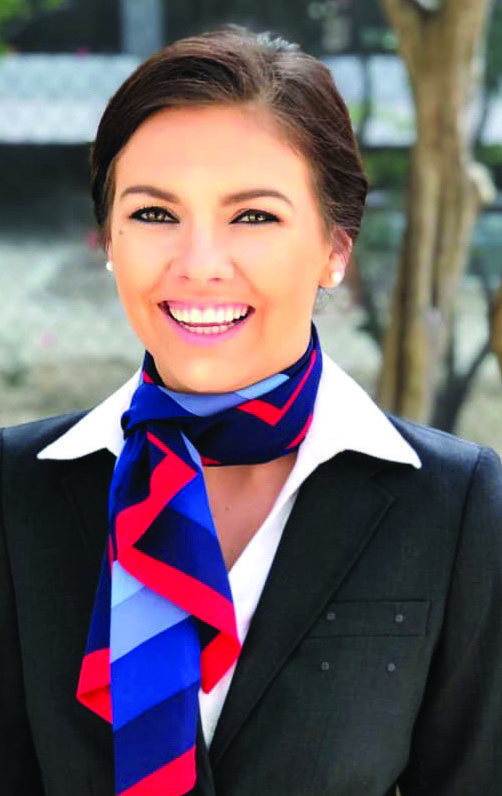 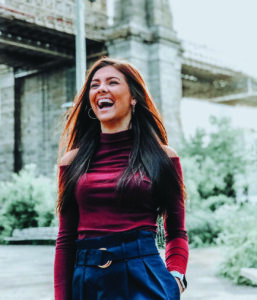 At just 24-years-old, Brittany Sherrod has more sky miles than most. The former pageant queen has been to six different countries in less than a year, most recently visiting Madrid and France. Despite an unpredict­able schedule, she’s loving every minute of being a flight attendant—and she doesn’t plan to keep her feet on the ground any time soon.

Brittany grew up in the northeastern part of Emanuel County near Midville. She went to school in nearby Twin City, graduating from Emanuel County Institute in 2013. Her rural upbringing made her want to become an advocate for agriculturalists and their industry, so she applied and was accepted to Abraham Baldwin Agricultural College. There, she studied agri­cultural business and economics.

“ABAC has a very application-based curriculum. It does a great job of equipping students and graduates with the technical skills and procedural knowledge to do well in many sectors of the ag industry,” said the daughter of Jim and Bobbie Sherrod.

Brittany was crowned Miss Emanuel County in August 2016. Be­tween that time and graduating college, she prepared for the Miss Georgia Competition. After she gave up her local title, Brittany moved to Wash­ington, D.C. to intern with Congressman Austin Scott’s office, putting her, geographically speaking, one step closer to where she is now.

In February 2019, Brittany decided on a whim to pursue a flight attendant job. She applied, started the interview process, and was in the 1 percent of the hired persons out of more than 65,000 hopefuls. Her career is definitely different than the one she anticipated, but that doesn’t mean she regrets her choice. 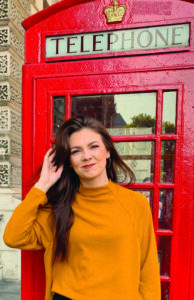 “I decided I wanted to take time out of my life to travel the world. It has been an amazing opportunity. I love being able to book a flight to a foreign country on my days off free of charge. This job has provided me with the ability to experience new cultures and see the world in a way I didn’t be­lieve was possible. Whether I am sent to London or somewhere in the United States, I always ty to find out what the locals enjoy. Experiencing the differ­ent cultures, even domestically, has been so eye-opening and invigorating.”

As a flight attendant, she oversees the passengers of the aircraft. She took six weeks of training to become the safety and service profession­al she is today. While on board, Brittany’s main job is to handle safety and medical issues that may arise in the air. As a result, she has developed a keen sense of self-awareness. Working in a customer-service oriented job has taught her that everyone needs to be held accountable for their own actions.

She has also learned to adapt. Her hours are long and her schedule has no consistency, which means she’s away from home for weeks or even months at a time. In addition, she usually has no idea where she’s headed next until three or so hours before takeoff. (One of the biggest challenges associated with that particular uncertainty is packing; Brittany says filling a suitcase with winter and summer clothes has proven difficult.) Add in irregular weather patterns, delays, and cancellations and Brittany’s job has all the ingredients for frustration, but the adventurer inside her loves the excitement that accompanies layovers in cities great for exploring.

Such a schedule comes at a price, though, for a family girl like Brittany. If she’s lucky and doesn’t choose to fly somewhere during her time off, Brittany gets to come home once a month for a few days. When she returns, she spends as much time with her loved ones as possible. After all, she and her five siblings—Zach Sherrod, Shea Sherrod, Chase Sherrod, Lauren Sherrod, and Cayden Lane—are as tight-knit as they come. She also loves to see her dogs.

Taking a brief hiatus from the hustle and bustle of city life is a nice way to relax, but coming back also reminds her how special home is compared to everywhere else in this big world.

“I moved to New York City in May 2019. I didn’t really choose New York. The company I work for chose it for me. Living here has been an amazing experience. I love the fact that you can hop on the subway and turn the corner to find an adventure right in front of you, but living here and seeing how other people have been raised, I now know how rare it is to have so many people in my corner. It’s nice to know that no matter where I go, I have an abundance of people cheering me on and wanting the best for me.”

The decision to move, she says, was an easy one—but it did take some work once she got to the Big Apple. New York and Swainsboro, she says, are polar opposites. Going from a one redlight town to a city that never sleeps was a big adjustment, yet she will probably do it again in a few years. In addition to taking up residence in New York and D.C., she also lived in Dallas, Texas for a while. She remained tight-lipped about where exactly she’s headed next, but if her track record means anything, it’s probably another major city.

Fortunately, she’s well equipped to continue moving around the country. Growing up in Emanuel County has made her responsible and, perhaps most importantly, empathetic and personable. All three of these qualities will help her create a new circle and find her niche, no matter where she goes.

“I haven’t decided what’s next for me,” she said. “I’m in a stage where I want to see and live in as many places as possible. I’ve always been the type of person who takes any opportunity that comes my way. I do plan on furthering my education within the next two years, but other than that, I guess we’ll see what life has in store!”

To the people back home who are contemplating leaving, she suggests taking the chance. “Just do it. I have so many people tell me they would love to do what I do. I always tell them they can—just don’t forget where you came from, and don’t forget that you can always go back home.”

Brittany would like to thank her community for making her who she is today, especially her parents and her two role models, Anna Johnson and Tori Pellerin, all of whom encouraged and supported her along the way.

[Editor’s note: As of May 2020, Brittany has relocated again and is living in Houston, Texas.]