As old as he is, he still misses his dad. 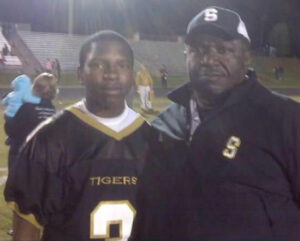 Coach Bobby Andrews was a great man, a Swainsboro High School legend, and, above all else, a father beyond comparison. His legacy is certainly worth celebrating, but this particular success story isn’t about him. It’s about his son, Bobby Jr., who is now trying to not fill his late father’s shoes but rather follow the footsteps he left behind.

One of the earliest memories Bobby has of his dad is perhaps his favorite. It’s also a memory that all of Tiger Nation will cling to forever—but Bobby’s version is much more personal.

“The 2000 state football championship game… The week before, we played Washington County in the dome. I got to go in the locker room with the guys, go into the press box. That was all possible for me because my dad was a coach. I remember watching him mix and mingle. He was so in his element. I can still see him in my head when we won that last playoff game. He was so happy, and we hadn’t even won the ‘ship yet. I remember getting to run out with the guys before the state title game started. I got to be the water boy. When we won the championship, I’ll never forget how excited my dad was. He was special to a lot of people, but he was my dad. Everything he was as a coach, a teacher, a family man, a Christian—that’s who I’m trying to be.”

Bobby was 4-years-old back then. He would spend another 16 years with his dad before a heart attack took Coach Andrews’ life. Getting to spend those formative years with his dad was life-changing. While most kids only get to share home life with their parents, Bobby, on the other hand, got to experience school, athletics, and some of his father’s career. It seems only natural that he’s emulating his late father now.

After Bobby graduated from SHS in 2014, he went to Albany State University on a baseball scholarship. While he was there, he studied health and physical education, just like his dad.

“Sports is in my blood. I played football and baseball in high school, and I went to too many basketball practices and games with my dad to count. Sports is all I’ve ever known, so when I got a chance to play for ASU’s baseball team, I took it. That school was definitely the right choice for me. Being an ASU Golden Ram helped me realize my potential.”

Zenobia Andrews’ middle child started his years in Albany with a bang. The baseball team won the SIAC championship when he was a freshman, and when he saw the brothers of Omega Psi Phi’s commitment to service around campus, he immediately knew he wanted to be a part of that great group of leaders as well. Sure enough, he joined the fraternity and eventually became president and keeper of finances.

He graduated in the spring of 2019 and has since went on to become a health and PE teacher, like his dad, at Americus-Sumter Ninth Grade Academy. He’s also coaching two sports, just like his father did.

“I did my student teaching at an area middle school, so when this job came open, I thought ninth grade couldn’t be too different. So far, I’m really enjoying it. Ninth grade is a critical time in a teenager’s life because transitioning into high school can be hard, and I feel like I get to make a difference,” Bobby explained. “I’m still trying to find myself in the profession. This is only my first full year, but I know this much already: Teaching means a lot to me. It’s what my dad did, but I also feel like I have an impact on the next generation. I get to be the motivator for a lot of the students. If I see they’re struggling, I can pat them on the back or give them a compliment to turn their day around. I get to be the black male that other black males can look up to, so that’s pretty awesome, too.” 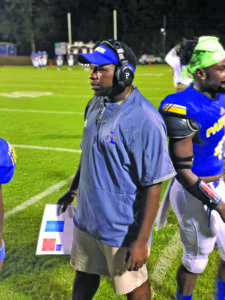 On the athletic front, Bobby is the assistant coach for the football and baseball teams. He works with the varsity linebackers in the fall. In the spring, he trains the infielders. Between his time in the classroom and his coaching responsibilities, he usually puts in about 12 hours per workday, six days a week. It’s a grind he loves, and he’s starting to see the fruit of his labor. Bobby and his Panthers went 6-6 on the year and made it to the playoffs as the No. 4 seed, and when he looks in the mirror every morning as he readies for another day at the schoolhouse, he’s reminded of how he should carry himself because of the resemblance between the face staring back at him and the man he walked alongside for so many years.

“My dad was raw and uncut. It didn’t matter if he was your teacher, your coach, or both. My dad was always honest and unfiltered with his students and athletes. He was really challenging as well. I think that’s why he was so good at what he did. I know he rubbed off on me because I’m the same way. I’ve found myself giving the same quotes to my players that he spoke to the hundreds of players he coached at Swainsboro. From the classroom to the field to the court, he was all about building up successful men and women. I’m just trying to do the same.”

Anyone who has lost a parent will most likely attest to the trying nature of such a tragedy. Bobby Jr. certainly has no issue admitting it. Losing his dad was “very tough,” but the love he and his surviving family members received from friends and the community is what enabled them to persevere. Bobby says his fraternity brothers really came through in their own way. Now, three years later, the pain hasn’t necessarily gone away—but he has learned a new normal.

As a freshman and a sophomore in college, Bobby’s first stop when he came home from Albany was his dad’s office at Swainsboro High School. He doesn’t get to come home nearly as often now that he’s working full-time, but he does make it a priority to come home and spend the holidays with his mother, older brother Oscar, younger sibling Madison, the rest of his family, and his childhood friends, many of whom he still talks to daily, thanks to group chats. His first stop, however, is still to see his dad.

“I love Albany, don’t get me wrong. I’ve got a lot of fraternity brothers nearby, and I’m involved with both our undergrad and graduate chapters in the area. I’ve become pretty close with my colleagues. I also have a lot of extended family that live just a short drive away. I’m settled in here, but there is something special about Swainsboro and Emanuel County. I think you have to leave to really appreciate it. It’s almost hard to put into words.”

“Coach [Scott] Roberts said it best when he came to Swainsboro in 2008. There’s nothing like being a Swainsboro Tiger on a Friday night! Swainsboro really is one of the most special places for high school football. The whole town shuts down and everybody’s on South Main Street to cheer on the home team,” Bobby said with a chuckle.

On a more serious note, he wants to return and become a positive influence for the community he grew up in, just like his dad was. His plan is to return to school to obtain his master’s degree, then hopefully become an administrator. 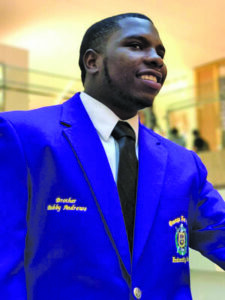 “To my community back home, I want you to know how appreciative I am for everything you’ve done for me and my family. From welcoming us to the community when we first moved here to being by our sides when we lost my father, Swainsboro is a wonderful place with great people. Swainsboro is always on my mind and will always be in my heart. I love everybody, and I’m praying for y’all.”

Bobby would especially like to acknowledge the neighbors, coaches, Dixie Youth baseball family, and family friends who, in addition to his parents, helped mold him into the man he is today. “Thank you for pushing me and getting me to where I am now. My journey’s not over. It’s just begun. I’m grateful for every single opportunity I’ve had. I’m humble. I know I’ve got a long way to go. I’m living life one day at a time, and I’m going to try and positively impact
as many people as I can along the way, just like my dad.”