; Berry Aldridge: How going ‘bananas’ about baseball landed him a full-time dream job

Berry Aldridge: How going ‘bananas’ about baseball landed him a full-time dream job 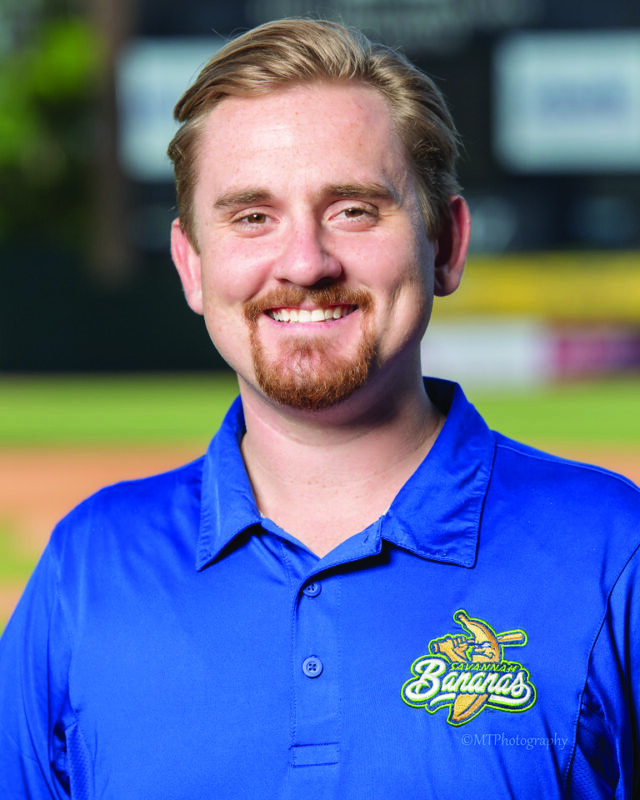 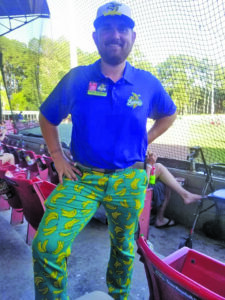 Lots of little boys across America play one season of little league and hope to make America’s favorite pastime their career. For a small percentage of those little boys, it happens. After years of playing baseball, they get drafted, work their way up through the minors, and finally make it to the bigs. That dream for most little boys, however, doesn’t pan out for a variety of reasons. Maybe their love for the game dissipates. Maybe they prioritize their finances and go to work, or maybe they get called up and decide it’s too difficult. Whatever the reason, making a go at baseball full-time is a monumental task, even for top talent. Berry Aldridge isn’t afraid of hard work, though, and he’s taken a creative route to getting paid to be involved with baseball.

Berry, the 25-year-old son of Hank and Sandy Aldridge, grew up near Kite, surrounded by his grandparents, aunts, uncles, and cousins on a piece of land that his “Mema,” Betty Hudson, proudly calls “Henry Hill.” He spent innumerable hours on the baseball diamond, starting with shadowing his dad as he coached the Swainsboro High School Tigers to many winning seasons. Berry’s love for the game took root at an early age, and his abilities blossomed as he grew older, thanks to his unmatched work ethic and determination. Over the years, he honed his craft by playing for the local Dixie Youth league and suiting up for the Black and Gold as a middle schooler. When he started high school, he transferred to Toombs County and collected a handful of accolades from the Georgia Dugout Club, including being named to its all-state team twice, once as a sophomore and again as a senior. Along the way, he impressed the scouts from Armstrong State University enough to earn himself a Pirates jersey. He committed and signed his National Letter of Intent in the fall of 2011. He finished high school in 2012 and arrived in Savannah that fall to contribute as a catcher and infielder. He graduated in December 2015 with a bachelor’s degree in English literature and started the master’s program that spring to be eligible for his senior season.

“I loved Savannah. I didn’t know how I would react to a bigger city, but I did love it. I’m very thankful for Armstrong, the athletic department, and the administration for making it a really cool experience,” Berry said. “While I was in college, I took a 50/50 approach. I played baseball like my dad did, and I studied English lit because it’s what my mom taught. I intended to use my degree to become an educator like my mom and a coach like my dad or to go into journalism, but life had other plans for me. Overall, I’m glad I went to Armstrong. It was for sure the right fit for me.”

While he was at ASU, Berry made the president’s list a few times, made the all-tournament team for the Peach Belt Conference in 2014, and served as sports editor of the school’s paper. He also worked on several committees, including one that lobbied to raise Armstrong’s athletic fees to a more average number, which, in turn, allowed the institution to better its facilities.

When spring 2016 rolled around and after Berry had played his last game, he dropped the master’s program. Some education enthusiasts might scoff at that decision, but it has turned out to be a sound one. He had a couple job opportunities from schools across the state to teach and coach like he had originally planned, but he had his sight set on a more innovative way to make money and still be around baseball. Enter the Savannah Bananas.

The Bananas, owned by Jesse and Emily Cole, came to town shortly after the Savannah Sand Gnats relocated to South Carolina to become the Columbia Fireflies. The new organization’s success story is impressive in its own right. Berry’s involvement in that story dates back to his internship, which he started in May 2016. His intuition told him the brand-new team might need some help and he knew he wasn’t quite ready to give up the game he loved, so he dug in, swung for the fences, and hit a home run. He was hired full-time in that August, and he’s been with the Bananas ever since. In September 2019, he was promoted to vice president of the organization. To put it simply, he’s living the dream. 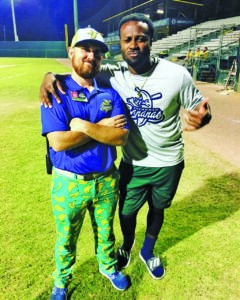 Berry and Erick Foxx, assistant coach of the Bananas and Thomas University in Thomasville, GA

Berry and other members of the leadership team have worked extremely hard to re-define baseball in Savannah. Their efforts have not gone unaccomplished, either. The Bananas were named Organization of the Year in both 2016 and 2017. Also, the Bananas are riding an 88-game sell-out streak, and attendance records have been broken year after year. The organization’s summer attendance ranks second in the nation. What most of the fans who visit Historic Grayson Stadium probably don’t realize, though, is the Bananas aren’t part of the minor league system like their predecessor, the Sand Gnats, whose purpose was to train up the next potential players for Major League Baseball. Savannah’s favorite baseball team instead is part of the Coastal Plain League, which has existed for the past 20 years to give the nation’s top collegiate baseballers an opportunity to get reps, gain exposure, and play competitively during the summer.

This unique league structure allows the Bananas to streamline decision-making, eliminate red tape, and run the team in a way that is very different than what’s expected at other baseball games. Berry has enjoyed getting to have a direct relationship with the owners and leaders and welcomes the varying tasks and responsibilities that others might not get at a more corporate team.

“I’m currently learning how to run the day-to-day operations of the team while also working with our coaches and the league itself. My primary role is to make sure every need is met for our premium seating fans, like full-season members, stadium club members, or businesses and groups who like to have party decks or nights at the park,” Berry explained, “but my work doesn’t stop when our season ends. It takes an immense amount of logistical work to pull off 27 to 30 games for 3,000 people per summer. We work through the off-season, too. We have to do that in order to be successful. Right now, I’m organizing waiting lists, helping with marketing plans, taking part in idea palooza discussions, going to ticket meetings in the community, and even helping how I can with video shoots. It’s a chaotic job. It never ends, but that’s what I love about it. We get to put fans first, entertain them, and put a really good team on the field. I think we give Savannah something to be proud of.”

He’s also grateful the opportunity the Coles gave him. Working under them, as well as president Jared Orton, has taught him how to consume business knowledge and how to be a quality leader. Working in such a close-knit office with people he genuinely likes, respects, and cares about isn’t something he takes for granted, either.

Relocating to Savannah for school and living there for work are two decisions he’ll never regret, although he does admit the initial move came with a scary change of pace as a newbie. That’s fair enough, given his small-town raising. Now that he’s been there seven years, he sees the coastal city as a “big small town.” Its upbeat vibe, plethora of great eateries, friendly townspeople, choice of activities, accessibility, and diversity have grown on him. Still, nothing beats coming home, which he gets to do upwards of 30 times annually, a great benefit he has because he stuck closer to home than other Emanuel Countians who have moved away in adulthood. 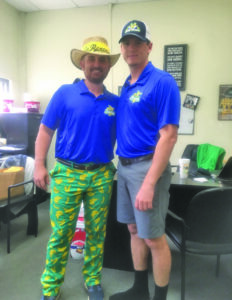 “Every time I pass Metter on my drive home, I just get this sense of familiarity I don’t get anywhere else. Savannah might be home now, but you can’t replace where you grew up. The community pride back home is second to none,” Berry commented. “I read in a magazine that Swainsboro is a great place to raise a family, and I have to agree. The close-knit nature of small towns gets a lot of things done. There’s always someone willing to help you out. You get a sense of home you can’t necessarily get in large communities. I’m so glad I got to grow up there.”

The younger brother of Jessica Parks and Rachael Vickers says metropolitan living has given him a new appreciation for small-town America. He doesn’t buy the whole “small-town America wants to be left alone” misconception. Nonetheless, his best words of wisdom for anyone looking to make that switch is to take comfort in the fact that there are good people everywhere. “Whether you live somewhere that has 5,000 people, 100,000 people, or 10 million people, create your community,” he suggests. “Connect with people who are different than you on the surface. Venture out, do your own thing. Learn about yourself. I don’t think there’s a thing in the world wrong with that.”

As for his community, Berry says he’s appreciative of the village that raised him. Among those he’d like to mention are his family, teachers, Hawhammock Church family, the Sherrod Family, the Carmichael Family, the Womack family, the Anderson Family, and the Rowland Family. He doesn’t have any specific plans for the future—other than to keep making the hometown proud and to stay “bananas” about baseball.