; Armani Moore: Ballin’ All Over The World

Armani Moore: Ballin’ All Over The World 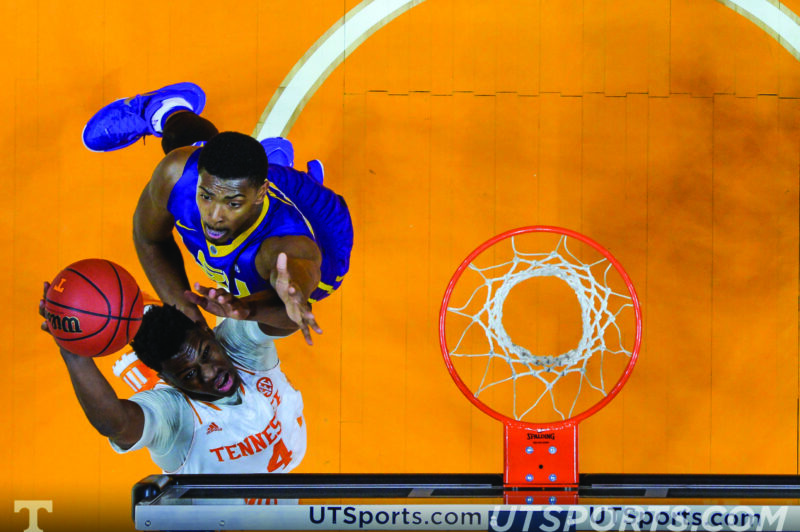 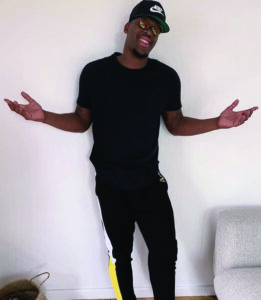 If there’s someone who epitomizes the phrase “living your best life,” it’s Armani Moore. He is among the slew of gifted athletes who hail from Emanuel County, but he’s one of the few from here who has actually made a career out of sport. He’s a man of few words about his success and where life has taken him since he left his humble hometown, but his accomplishments and some of his biggest supporters help vocalize the unspoken.

Leroy Jordan, long-time girls’ basketball coach at Swainsboro High School and a pillar of the local community, recalls a committed and talented young Armani. The current men’s basketball coach at East Georgia State College says Armani’s basketball IQ was commendable even as a child, and his competitive nature helped chisel out his athleticism. As Armani matured, his level of play continued to improve. He impressed in the Black and Gold as a Swainsboro Tiger from middle school all the way until his junior year of high school. By the time his senior year approached, Armani knew in order to make the most of his work, he needed to be elsewhere, so he transferred to Mount Paran Christian School in Kennesaw.

“Armani, he was always a hard-working kid. He had a basketball mindset from the time he was little. When he got to middle school, I think that’s when people really started to notice how talented he was, and yet the best was still to come for him,” Coach Jordan said. “As he grew older, he went to a lot of camps to get exposure. His father lived in Atlanta and was a basketball player himself. He did a lot with Armani coming up. On top of that, he had a lot of competitiveness within the group of guys he grew up playing with. That only made him a better basketball player. When he got the opportunity to move and get more exposure at Mount Paran, he took it, and it has paid off for him.” 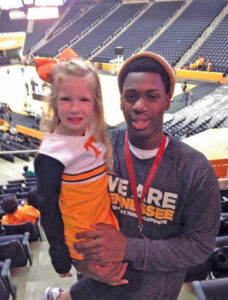 At Mount Paran, Armani’s basketball coach was Scott Varner. He says Armani was more than a student-athlete there; he was also a mentor to younger kids and always engaged with them. “Sure, he was the big man on campus with his athletic skills, but he didn’t walk with an ‘I’m-better-than-you’ attitude. He walked with an attitude of ‘I’m so blessed to be here and I want to be involved and make a difference in these kids’ lives,’” said Coach Varner. “He has a heart of gold, and he’s someone we at Mount Paran Christian are proud to call an almnus.”

Of course, it certainly helps that Armani, son of Claudette Moore and Elvin Clark, led the school to a 24–6 record and the second round of the Class A state playoffs., averaging 22 points, 9.3 rebounds, 3.9 blocks, and 2.6 steals per game. He shot close to 40 percent from the 3-point range during his final prep season, and the Georgia Sports Writers Association selected him as a first-team all-state honoree. When he chose Tennessee over Mississippi and the College of Charleston, he made Mount Paran history as the first student-athlete to receive a Division I basketball scholarship.

“The year before Armani came to school, I had the opportunity to coach his cousin, Josh Johnson, who had transferred to Mountain Paran for his senior year from Whitefield Academy due to his dad taking over a church in our area,” Coach Varner said. Josh had a great experience that year and was close to Armani, so they talked quite often. Armani visited the school and fell in love with it. “I actually look back and laugh because the first time I met Armani was in the gym over summer. I thought, ‘Who is this guy!?’ I had never seen him before, and I honestly thought he was a college kid or young adult coming in to work out in our gym,” said Coach Varner. 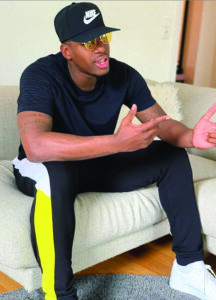 The logistics came together and fast-forward a few months, Armani found his place quickly. He became very active in the athletic realm. Not only was he a formidable part of the basketball team, he also played football the semester before in the fall. After Armani had suited up for the Eagles for the last time and had to make a decision about the next phase of his life, Coach Varner worked with him on his recruitment from multiple universities and stood by him, offering counsel as needed, as he eventually chose Tennessee.

In 2012, Armani arrived on Rocky Top as a quiet, unassuming freshman. The young man who modeled his game after Kobe Bryant’s passion for the game went to Volunteer country as a lightly recruited guard from a tiny private school, but he departed as a versatile forward, a “stat stuffer.” He could score anywhere on the floor and, for his size, was an excellent rebounder and defender.

“Armani got better and better every year, and he became a fan favorite because they loved his toughness and blue-collar work ethic,” Tom Satkowiak, Associate Athletic Director of Communications for the University of Tennessee, said when asked for comment about the star’s time as a Volunteer. “He played much taller than his listed height of 6-4. In fact, he ranks among the top 10 on Tennessee’s all-time list for blocked shots. He was one of the program’s most effective helpside shot-blockers in the last 20 years. His development over the course of his four-year career was really impressive, and he set himself up for a very successful pro career.”

Galen Campbell was a year older than Armani and watched his transformation take place. He says Armani was mature beyond his years from the start, and his confidence and leadership skills evolved as time progressed. Armani became the “heart and soul” of the team during his final year, according to Galen, who watched as that season unfolded. In 2016, he was twice named SEC Player of the Week, and his hard-nosed, physical style of play helped him make great athletic strides.

Academically, Armani went into UT with a plan. He graduated in 2016 with a degree in sports management, hoping to set himself up for success as a team manager after retiring. As with most people, however, life had other plans.

Though he went unselected in the 2016 NBA Draft, he did participate in the NBA Summer League with the Indiana Pacers. The team didn’t sign him, but that wasn’t the end of his basketball career. After the summer league finished, he started playing internationally, and he’s been balling all over Europe ever since.

Armani got his foot in the door of the Polish Basketball League (PLK) when he signed with Stelmet Zielona Gora in August 2016. He and the team went on to win the league title as well as the 2017 Polish Cup. 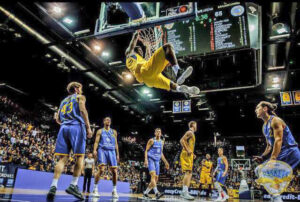 Armani returned to Stelmet for a second season, then signed with EWE Baskets Oldenburg of the German Basketball Bundesliga (BBL) in January 2018. Later that year in June, he moved to the New Zealand Breakers, who play in the National Basketball League (NBL). Armani played with that team through the beginning of 2019; he returned to the BBL after signing with Eisbaren Bremerhaven for the remainder of the 2018-2019 season on March 25, 2019. When Bremerhaven was relegated to another division, Armani took a short break from playing to focus on his business investments. He picked back up just a few months ago, returning to the PLK on October 14, 2019 when he signed with Arka Gydnia and was traded back to Stelmet two months later. [Editor’s note: as of May 2020, Armani is currently back with EWE.]

Looking back on where he came from, where he’s at now, and the things he’s gotten to experience, Armani is in awe. “My college experience was the best time of my life. I met many people who I now consider friends for life. It was a great blessing to receive a free education and say that I gave my all for Tennessee. I’ve grown as a person as well as a player. Playing basketball has really opened my eyes to the different cultures around the world. I’m grateful for being able to live this life.” 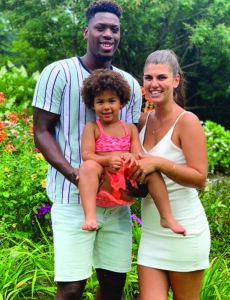 Armani, Anna, and their daughter

In the last four years, Armani has seen a lot of places, thanks to international basketball. Even when he isn’t playing, he’s traveling for leisure. He has visited some of the world’s finest cities and beaches. He moved to Poland for his rookie season. He’s also been to Prague, Czech Republic; Palma De Mallorca, Spain; Berlin and, of course, Oldenburg and Bremerhaven, Germany; Amsterdam, Netherlands; and Auckland, New Zealand. Because of his career, he doesn’t get to see his family and friends at home for 10 months out of the year—but he’s not entirely lonesome. In 2018, he met Anna Meyer and her daughter while in Oldenburg, and the three of them have formed a special connection through spending time together and traveling. He and Anna recently got engaged in December.

Armani’s plan for the short-term is to stay healthy, continue playing the game he loves for as long as possible, and maintain a positive image. “No matter where you’re at or what you’re doing, someone is always looking at you. Somebody is always ready to write their own version of you. Most important to me right now is to make sure they have something good to write,” he said.

He especially wants to be a good influence for the younger generation back home. Just days after inking his latest deal with Arka, he captioned an Instagram photo of himself as a child, saying, “Growing up in Emanuel County, I would have never imagined it would be possible to become something. There was no such thing as ‘adjusting to adversity’ because every day I woke up, I felt as if I was living within adversity. Many times, I felt as if a simple basketball was my friend, my girlfriend, my mentor, my education. In short, I felt like a basketball was my everything! I’ve been different my whole life, and I am forever grateful to be where I am today. I’ve had good days, but I’ve also had bad ones. But listen to this! One thing I’ve learned is that for all of those days where I woke up and felt like the world was against me, I was able to prepare myself for what the real world was able to throw at me.”

Long-term, Armani wants to move back home, start a family, and make a bigger difference than what he is now. He has plans to launch a clothing line, and the 25-year-old is in the process of starting a foundation to provide 20 kids with school supplies.

In closing, he wants everyone here in Emanuel County to know they, too, can live their best life—but he also wants everyone to understand that he hasn’t forgotten his roots. “Anybody who wants to leave, you have to have a vision and you have to have drive. If you have those two things, nobody can stop you!” he said. “Playing ball was always my plan. I worked really hard to get where I am, and I’m fortunate it worked out. Swainsboro will always be me. Who I am is where I come from, and I will never forget that!”