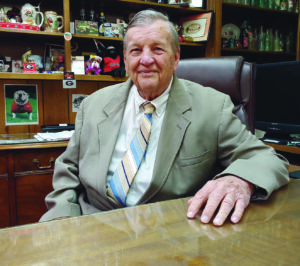 Sid Shepherd could have retired twice by now, but the long-time attorney says he won’t quit until he is toted out of his East Moring Street office. His passion is undeniable, given he reached the 60-year mark of practicing law on April 1, 2020, and the longevity of his career lends to an interesting story.

Though he’s been in Swainsboro long enough to call it home, his life story and the professional one attached to it starts in North Carolina. Ask him where he’s from and he’ll proudly repeat a catchphrase about his birthplace taught to him by his father: Elizabeth City is his hometown, and it’s nestled in the County of “Pasquotank, where the bullfrogs jump from bank to bank.” He spent five years there before his family moved in 1940. As it turned out, his new home wasn’t all too different from his former one. His father’s career as an oil company employee landed the Shepherds in coastal Georgia, running a store in Savannah.

Shepherd spent his formative years there, then moved northward to Athens to attend the University of Georgia. He obtained his Bachelor of Arts in 1957 from that institution. His brother, a product of UGA’s law school, inspired him to pursue similar endeavors, so Shepherd packed up and moved yet again, this time to Atlanta, to attend Emory University School of Law.

As a result, he eventually landed a job with the Legislative Council of Georgia and was assigned to then-speaker of the house George L. Smith II. As the young lawyer-to-be closed in on his degree, Smith asked if he would be interested in becoming a “country lawyer.” The state representative pitched the idea of a visit to Swainsboro, to which Shepherd quickly agreed. One trip to this part of southeast Georgia was all it took. Shepherd was married at the time with small children, and he immediately knew the Crossroads of the Great South would be prime country to raise a family. He passed the state bar April 1, 1960; graduated that June; moved here in November 1961; and has never left since.

“I wanted to get out of the legislative office because it wasn’t actually practicing law. We wrote laws, and that wasn’t what I went to school for exactly. I knew if I became a lawyer in a small town, I would get to practice in a more generalized manner, meaning I could offer a variety of services from general real estate to estate work to family law to criminal work and so on,” Shepherd explained about transitioning from one type of practice to another. “Swainsboro wasn’t like Atlanta, where I was living when I worked with the legislative council. I thought it would be a good place to raise a family, and everybody I met seemed very nice. I and my then-wife liked the town, so it was an easy choice. I’ve been very fortunate and very blessed since I moved here.”

He’s met innumerable folks along the way and seen a plethora of changes take place in his profession. When asked about some of the influential people he has crossed paths with over the years, Shepherd said the list is too long to name specifically—but he did give a nod of acknowledgement to his fellow lawyers, the court recorders, the judges, and the clients he has had the privilege of working with from the beginning to now. In regard to the changes that have occurred in the field of law in the last 60 years, Shepherd says his profession has become much more complex. The best example of that, he explained, is that he once could close a real estate loan with approximately 10 pages of documents. Today, that process calls for at least 150 pages or more. However, the complexity hasn’t deterred him from thoroughly enjoying what he does. In fact, the complicated nature adds to his passion.

“I enjoy practicing law because it’s challenging. They call it practicing because you’re always looking for a solution to something. Sometimes, the solution is harder to find than other times. Sometimes, you can’t find a solution, but you just do the best you can. That’s what I’ve tried to do all these years, and knowing I tried my best every time for a client is good enough for me,” he said. “My favorite part of being a country lawyer is the pleasure I get from dealing with people, helping them with their needs. When they tell me they’re thankful for my help, that makes everything I do worth it.”

To that note, the community has apparently been pleased with Shepherd’s services. He has been voted Best Attorney numerous times in The Forest-Blade’s annual Reader’s Choice contest. The 60-year professional has been the city attorney since he arrived here in 1961, and he has been the attorney for the Citizens Bank of Swainsboro for that long, too. Many plaques for various awards adorn his office as well.

“I’m glad for the awards and being able to say I’ve been the city’s attorney and the bank’s attorney for 60 years, certainly… Those are nice things, but I’m not an ego guy. What means the most, I think, is that the local people think enough of me to trust me with their needs and have kept me in business this long.”

Undoubtedly, there is a generation who recalls his early days in Swainsboro, there is also a group of people who only know him as a partner in his current business, Shepherd, Gary, & McWhorter. The details of the firm’s origin are probably unknown to most people in this county, but the story isn’t lost on Shepherd.

The local law group to which Shepherd belongs today began back in 1895 with Robert Williams, whose son, Felix Williams, became a lawyer in 1917. Felix and George L. Smith formed the practice when they joined hands; the two were collectively known as Williams & Smith. Once Shepherd came to Swainsboro, he entered the firm, which then became Williams, Smith, & Shepherd. Next, Loren Gary joined the firm, changing the operating name to Williams, Smith, Shepherd, & Gary. Williams died sometime later, and the name was revised to Smith, Shepherd, & Gary. Smith’s name was dropped after his death as well. Bill McWhorter came into the firm in 1974, followed by Shepherd’s brother, Millard, in 1980. At that time, the name was changed to Shepherd, Gary, & McWhorter, and it has remained such, even after the passing of Millard and Gary. Total, seven lawyers have There have been seven lawyers involved with the firm, but one has withstood the test of time longer than others—and that person is none other than Sid Shepherd, of course. He looks forward to coming to work every day with his one remaining firm partner, McWhorter.

As proud as he is of his many professional accomplishments, including practicing for more than half a century, the father of three is especially proud of his children. His daughter, Kelly Lanier, followed in his footsteps and became a lawyer herself. The Georgia Southern University alum went to law school in Vermont, passed the bar, and began practicing in Brunswick. She is now married and teaches paralegal studies at Coastal Georgia Technical College. She also practices law on the side.

Shepherd has two sons: Sidney B. “Sandy” Shepherd Jr., who retired from the Georgia Department of Agriculture and lives in Richmond Hill, and the late Joseph B. “Joey” Shepherd, who passed away in June 2015.

“When I think back on all my years practicing law, I just feel blessed. I’m glad I’ve had such a long career, and I don’t plan on stopping any time soon. I will admit I avoid going to court unless I have to, but that’s okay. I have plenty of work to do otherwise. My favorite part of practicing now is estate work. I hope my passion for law still shows. I really, thoroughly enjoy what I do. When I go, I want to be toted out of this office. I think that’s the only way I’ll ever call it quits.”