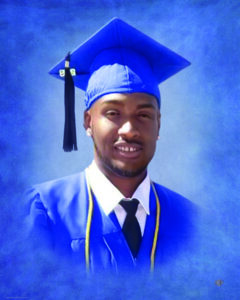 A walk-in viewing for Robert Joesph Johnson, 31 of Nashville, Tennessee, formerly of Swainsboro, was held Saturday, April 11, 2020 at Chapman Funeral Home. In compliance with guidelines set by the CDC, the 10 people, 6-feet rule was enforced during the viewing. He passed away Saturday, April 4, 2020.

Mr. Robert Joseph Johnson was born January 24, 1989 in Swainsboro to David Johnson and Dolly Madison. He was a high school graduate of the Class of 2008. Johnson attended the Ultimate Medical Academy, where he graduated with an Associate of Science in Health Sciences as a medical administration assistant in 2019. Johnson was a certified basic correctional officer with the Georgia Department of Corrections. He worked at Walmart and Walgreen’s in Swainsboro, Jenkins Correctional Facility in Millen, and was a security guard with G4 Security Solutions in Nashville. Johnson enjoyed grilling and spending time with family during Christmas at his mother’s home. He was a member of Good Shepherd Church of Holiness in Wadley. He was proceeded in death by his maternal grandparents, Willie Thomas and Lanie Archie; paternal grandparents, Rev. Robert and Beulah Johnson; and a brother, Clarence Gardner.