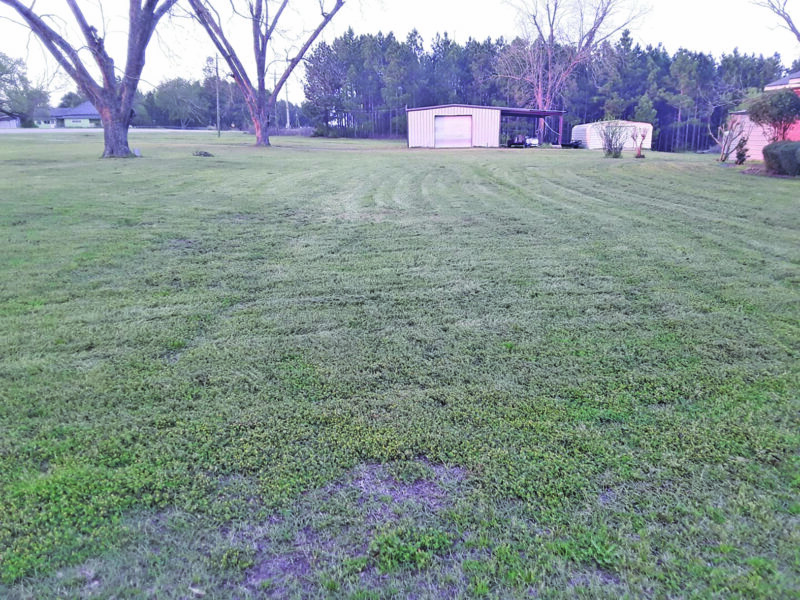 Del Brown has been a busy man over the last few weeks as concerns about coronavirus have grown locally. He and his employees at Pinetucky Country Meats in Swainsboro and Pinetucky Country Meats in Soperton have been working nonstop to keep the shelves stocked for customers, and as a result, he didn’t have time to cut his grass at home. Enter friend Mike Rowland, whose random act of kindness has helped remind Brown just why the Pinetucky team has to keep going.

“We’ve literally been working every single day from 7 in the morning to 7 at night, trying to get product. When we do get product, we have to get it cut, wrapped, trayed, and put out in the cases. All the long, hard hours we’ve been putting in makes it impossible to do anything else when you do get home or any time away,” Brown said. “I just didn’t have time, nor did I feel like cutting the grass, so it got neglected.”

Rowland, who goes to Hawhammock Baptist Church with the twice-over entrepreneur, just happened to visit Brown’s house to do a small electrical job. During his visit, he noticed that Brown’s grass needed some housekeeping, so he did what any good neighbor and fellow brother in Christ would do: he took a look at Brown’s lawn mower sitting nearby and decided to take action. As it turned out, however, Rowland had difficulty with the mower that day, so he returned the next morning to do the approximate three-hour deed and by the time Brown got home that afternoon, he had a freshly mowed lawn and one less item on his to-do list.

“Del had actually bought a camper and needed a receptacle put in so he could plug it up to his shop. While I was there, I noticed that the yard had grown up a bit. I just saw the lawn mower there and thought I could help. He had told me how busy they had been at work, so it just seemed right,” Rowland said.

“I was certainly happy about it and tickled that anybody would take the time out of their day to do it, especially during this time. I’m thankful he done it. He certainly didn’t have to. He saw the need and reacted to it. It was just a nice gesture because he knew we had been so busy.”

Brown is a 33-year veteran in the butcher business, and he says the last three weeks or so have been unlike anything he has previously experienced. In order to keep up with demand, he has worked unusually hard to find meat for his store. He has also taken a proactive approach from a managerial standpoint to keep his staff focused and motivated throughout this season of chaos.

“I’m up earlier and later than usual making calls to find product for our store. I talk with all of our team every day to make sure they understand why we’re working so hard. To have someone like Mike come and cut my grass voluntarily, it just reminds me that we have to take care of each other, and I tell my team that is why we’re doing this. We’re trying to serve our community, and I mean that. It’s more than just sales. I did corporate before, and it’s just different to me now. It’s so important to be able to put meat on the shelves for our friends and neighbors because I’ve seen the panic that’s out there. If we at Pinetucky can help in any way, I want to do that, just like Mike did for me.”

This random act of kindness wasn’t Rowland’s first time assisting someone in need, and it certainly won’t be his last. He and a group of men at the church have long been lending help without expecting anything in return. From putting new roofs on to building new porches to constructing wheelchair ramps, Rowland and his brothers in Christ find joy in giving. “If you have the opportunity, do something nice for someone—but don’t do it so people will look at it and think, ‘Oh, look what he did! He’s such a nice guy!’ Do it and hope no one knows about it. That’s when you will feel great about what you’ve done.”