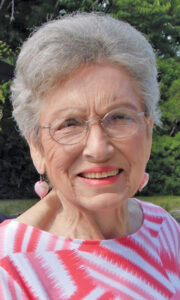 Durden-Hudson Funeral Directors announces the death of Peggy A. Anderson, 85 of Twin City, Emanuel County, on Monday, March 23, 2020 at Pruitt Health in Swainsboro.

Private entombment services were held Thursday, March 26, 2020 at 11 a.m. at Eastbrook Cemetery with Rev. Randall Smith officiating. There will be a celebration of life service for all family and friends at a later date.

Mrs. Anderson was born January 15, 1935 in Summit, Emanuel County, to the late John J. and Ella Parham Andrews and was a graduate of Emanuel County Institute. She retired from Emanuel County School Service after many years as lunch room manager of Twin City Primary School. Mrs. Anderson was a member of Twin City United Methodist Church, the UMW, and sang in the choir. She was an avid fan of the ECI Bulldogs, and shoe shopping at Belk’s was one of her favorite pastimes. All joking aside, she was a loving wife, mother, grandmother and great-grandmother. In addition to her parents, she was preceded in death by her husbands, Richard I. Anderson and Bobby T. Wimberly.