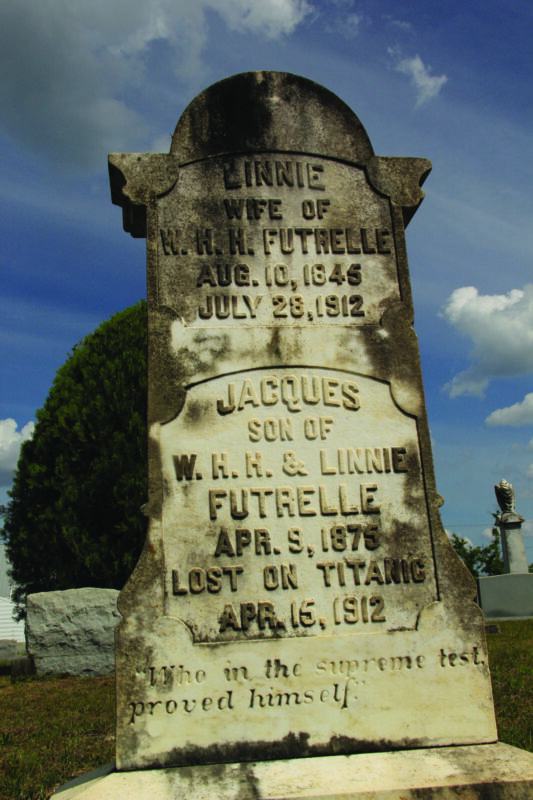 The graveyard at Poplar Springs Methodist Church hosts the remains of many lost loved one. One particular grave is the corpse of a mother who lost her life due to the loss of her son.

Located on the left side portion of this cemetery is the tombstone of the late Linnie Bevill Futrelle. Setting her tombstone apart from all others is the incorporation of a cenotaph for her late son, Jacques Heath Futrelle, who lost his life in the sinking of the RMS Titanic.

Affectionately known as “Jack,” Jacques was born April 9, 1875 in Pike County. He attended public schools in Pike County and was also educated in basic academics and French by his father, Wiley Harmon Heath Futrelle, who was a descendant of the French Huguenots and a teacher at an Atlanta college.

At the age of 18-years-old, Jack began his career at The Atlanta Journal. Following his career at this location, he later became an employee for The New York Herald before accepting a manager position at a small repertory theater in Richmond, Virginia. After a two-year stint, Jack moved to the editorial staff at The Boston American. He later left The Boston American in 1906 to begin his career as a novelist and became a well-known and respected novelist by the early 20th century.

In the midst of his professional career, Jack married fellow writer Lily May Peel on July 17, 1895. To this union came two children, Virginia and Jacques “John” Jr.

In 1912, Jack and Lily visited Linnie’s home prior to traveling to Europe, where he wrote a number of magazine articles.

On April 9, 1912, friends of the Futrelles gathered in London to celebrate Jack’s 37th birthday.

The following morning, April 10, after staying up all night celebrating, the couple boarded as first-class passengers on the RMS Titanic, possibly accommodating cabin C-123.

At approximately 2:20 a.m., April 15, the Titanic began to sink into the North Atlantic Ocean about 400 miles south of Newfoundland, Canada.

Though Jack told Lily that he would come later on in another life oat, the last she saw of him was Jack smoking a cigarette on the decay with John Jacob Astor IV.

Jack perished in the waters of the Atlantic. His body was never found.

Following the loss of her son, Linnie passed away in her Georgia home on July 28, 1912. The cause of death was attributed to grief over her son, Jack.

The news, reported from Adrian, made breaking headlines throughout the world, including The New York Times.

Notable attributed work gifted to society by Jack include The Thinking Machine, The Problem of Cell 13, The Chase of the Golden Plate, Elusive Isabel, The Thinking Machine on the Case, The Diamond Master, The Leak, and The Simple Case of Susan. Jack was also responsible for bringing to life the sports section of The Atlanta Journal. His last work, My Lady’s Garter, was published posthumously in 1912. His widow, Lily, inscribed in the book, “To the heroes of the Titanic, I dedicate this my husband’s book,” under a photo of Jack.

Underneath the identification of Jack’s mother’s grave reads the memorial of his life, “Jacques, son of W.H.H. and Linnie Futrelle, Apr. 9, 1875; lost on Titanic Apr. 15, 1912. Who in the supreme test, proved himself.”