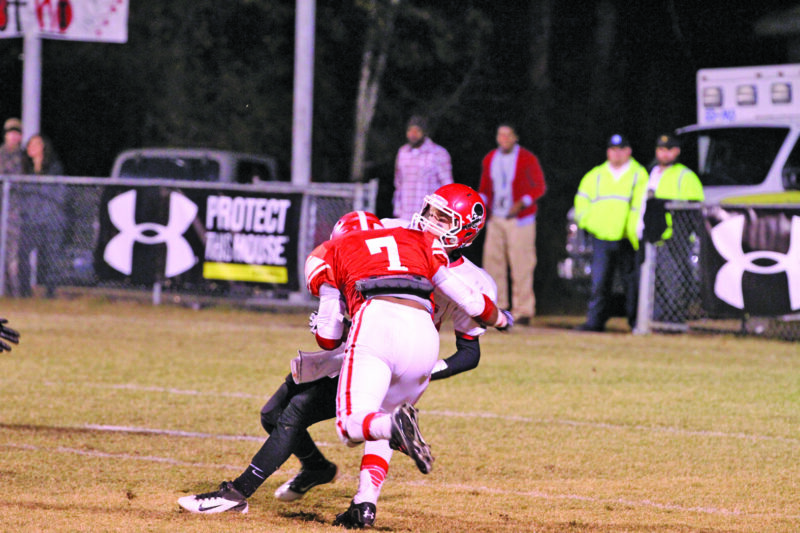 For some unknown reason, the Raiders’ star running back decided to try to antagonize the Bulldogs during pregame warmups close to the 50-yard line and continued to do so for several minutes. Before the warmups were over, the Bulldogs players were biting nails and needed no pregame talk to get them ready to make the Raiders pay.

In the game, the running back was not a factor as the Bulldogs held Myrick to less than 50 yards and spent most of his time looking up at Bulldog defenders.  Myrick went on the play defensive back for the Minnesota Gophers and was drafted in the seventh round in 2017 by Jacksonville and was passed around to the Vikings, Falcons, and the DC Defenders of the newly formed XFL.

The ECI Bulldogs defeated the Savannah Christian Red Raiders Friday night 48–14, leaving no doubt who was the best team in Region 3. With the win, the Bulldogs also won the Region 3 Championship, giving them four region championships over the last seven years with one state championship and one runner-up.

Any time you have the No. 2 and No. 6 ranked teams face each other, excitement and anticipation are in the air before the game. Besides the fans, the Bulldog players had been looking forward to this game for a couple of weeks. The coaches had no problem getting the team up for this game. If anything, they had to tamp them down to focus on the task at hand.

“I’m proud of our players, coaches, and community,” mentioned head coach Chris Kearson after the game. “It’s satisfying on so many levels to bring the region championship back to ECI against the defending state championship team in Savannah Christian.” Kearson went on the say, “Those guys are fun to play and coach against, and I was extremely proud the team effort. We’ll need more of the same as we enter the playoffs.”

You could tell it was going to be standing room only with the stands filling up on both sides during warm-ups. Usually, there is not very much excitement during warm-ups with both teams going through drills, getting ready for the game, but thanks to some pre-game antics, a lot of the Bulldog fans were ready to buckle up the chin strap themselves. Needless to say, the Bulldog players needed no pre-game pep talk before taking the field.

Now it was time to see if the Raiders could walk the walk as they won the coin toss and elected to receive. On the fifth play of their drive, Troy Randall fell on a Raider fumble and the Bulldogs had the ball at the Savannah Christian 47. After seven running plays and two motion penalties, the Bulldogs had fourth-and-16 at the Raider 29-yard line. On fourth-and-16, Caleb Pressey hit Greg Percell for a 29-yard strike for the game’s all-important first score. With a Pressey kick, the Bulldogs led 7–0.

The Bulldog’s next possession started at their own 46-yard line. On the fifth play of the drive, the Pressey-to-Percell combo worked again as Pressey hit a streaking Percell on the sidelines for a 36-yard touchdown, putting the Bulldogs up 14–0.

After a kickoff in the end zone, the Raiders took over their next drive at the 20 and three plays later, it was Bulldogs’ ball again when under heavy pressure by Taiwan Daughtry, the Raider QB threw an errant pass, which was intercepted by Zavier Robinson, who brought it back to the Raider 13-yard line. After a 15-yard chop block penalty brought the ball back to the 25, the Raider defense bowed up and the Bulldogs turned the ball over at their own 19-yard line.

The Raider drive was short-lived as, once again, the Raiders turned the ball over in their own territory when James Brown made a diving interception and the Bulldogs took over on the Raider 18-yard line.

This time, the Bulldogs were not going to be denied. On fourth goal from the 4, Pressey threw his third touchdown of the night when he hit James Brown, putting the Bulldogs up 21–0 with three minutes left in the second quarter, which is how the half ended.

The Bulldogs took the opening kickoff of the third quarter and made a statement, driving the ball from their own 23-yard line taking almost 6 minutes off the clock. The statement ended when Greg Percell took his seventh hand-off of the drive for a 17-yard touchdown run, putting the Bulldogs up 28–0.

The Raiders put on their first touchdown drive starting at the ECI 48-yard line. After a questionable interference call put the ball on the Bulldog 11, the Raiders would score four plays later on a 7-yard touchdown pass.

The Raiders mounted another scoring drive late in the fourth quarter but were turned away on their next drive when Renaldo “Scooter” Williams had the Bulldogs’ third interception of the night at the Raider 30-yard line.

Leading rushers for the Bulldogs were Greg Percell, 130 yards on 20 carries while Caleb Pressey carried 8 times for 41 yards. Presey was also 6–10 passing with 135 yards and 3 touchdowns.

The win gives the Bulldogs a 9–1 regular season record. With a No. 3 power ranking and a win in the first round, the Bulldogs are insured at least two playoff games at home. Preliminary indications are ECI will face Gordon Lee high school from Chickamauga in the northwest corner of the state. The brackets for Class A won’t be posted on the GHSA until Tuesday afternoon when the final power rankings are determined.

Along with the rest of the Class A playoff teams, the Bulldogs have a bye this week and will have two weeks to prepare for their next opponent. The first round of the playoffs for the Bulldogs will be at home on Friday, November 23, with kickoff at 7:30 p.m.