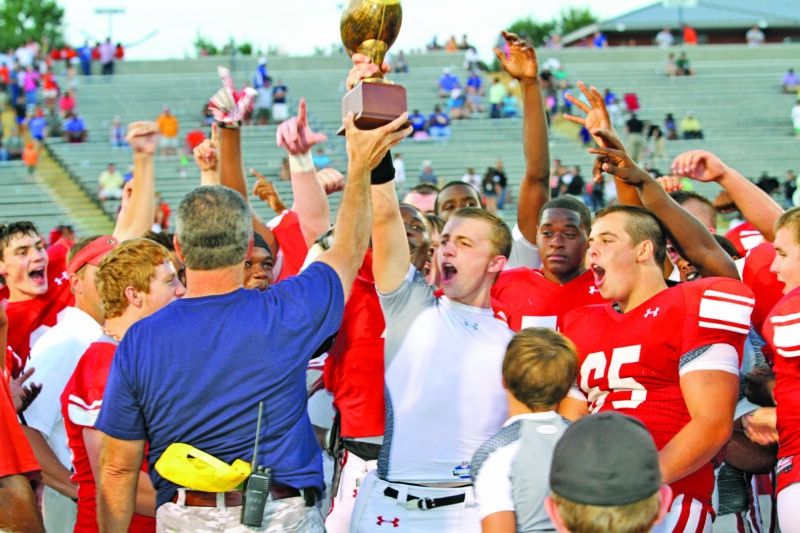 After winning the scrimmage game against Fitzgerald, the 2012 ECI football team opened the season playing in the inaugural Erk Russell Classic. The Bulldogs defeated Metter 42–7, receiving the trophy from former ECI Bulldog and GSU Eagle Tim Durden. The 2012 team went on to win the state championship, losing only to Washington County in the regular season, who lost in the third round of the AAA state playoffs to Saint Pius. The Bulldog offensive juggernaut scored an average of 39.5 in the state playoffs, defeating Dooly Co 42–7 to win their second state championship in five years.

After spring and summer workouts and practice, football teams are chomping at the bit and looking forward to the first game of the season. This year, the Bulldogs have an added incentive to begin the season as ECI has been chosen and invited to play in the inaugural Erk Russell Classic at Paulson Stadium, home of the GSU Eagles. The Bulldogs will face long-time rival Metter Tigers in their annual match-up. Coach Chris Kearson stated, “The Erk Russell Classic game is a great opportunity for our players, coaches and community to experience a college atmosphere in a college stadium against one of our oldest rivals.”

The game began as a conversation last summer in the Bishop Field House at the stadium among former Eagle players, discussing an event that would honor Coach Russell. The four players, Darryl Hopkins, Tim Durden, Mel McBride and Terry Harvin, decided to honor the coach with football games at the field he once roamed, inspired players, thrilled fans, and won championships. Not many coaches at any level motivated his players to play 100 percent than Erk Russell. When the name “Erk Russell” is mentioned, football fans think of GSU football, GSU championships, a bleeding forehead, beautiful Eagle Creek and his quote for which he was famous during the playoffs, “One More Time.”

The next thing they had to do was find a sponsor. Due to NCAA sanctions, the Eagle Football Alumni Association could not sponsor the event. The sponsor of this year’s games will be The Heritage Investment Group from Hinesville. They also needed four area football teams who have a large following both at home and away. It was decided that with the Bulldogs large fan turnout and Metter being a rival game, they would invite the Bulldogs and Tigers to play in the early game. Originally, the late game was to be the state champion Burke County Bears versus the Bluffton Bobcats, but that game had to be cancelled due to the Bobcats dropping the Bears from their schedule. The second game will now be the 1AAAAAA Brunswick Pirates versus the3AAAA Wayne County Yellow Jackets.

The Bulldogs will be the home team with the kickoff at scheduled at 5:30 on Saturday, August 25, 2012. The Brunswick-Wayne County game will be the late game, which should start around 8:30.

Metter has not beaten the Bulldogs since 2004 when the Tigers won 26–21. Since that game, ECI has beaten Metter by an average score of 45–14 with the closest game being in 2011. With the game tied 7–7 at the half and 14–7 at the end of 3rd quarter, the Bulldogs scored 2 fourth quarter touchdowns to pull away in a hard-fought game 25–13. This year’s game promises to be the same hard-fought game as Metter’s coach, Mike West, has the Tigers playing more competitive ball since he took over in 2010. With Coach West being a former Eagle player, he and his Tigers will have added incentive to take one from the Bulldogs this year.

Tickets for the game are $10 and include both games. It is advised to purchase your tickets in advance at the ECI front office. More information will be posted on the Bulldogs’ football website, www.ecibulldogs.com, and the Bulldogs’ Facebook page, ECI Bulldogs Football, when available.