; Commencement for Class of 2020, parade for state champs to go on

Commencement for Class of 2020, parade for state champs to go on 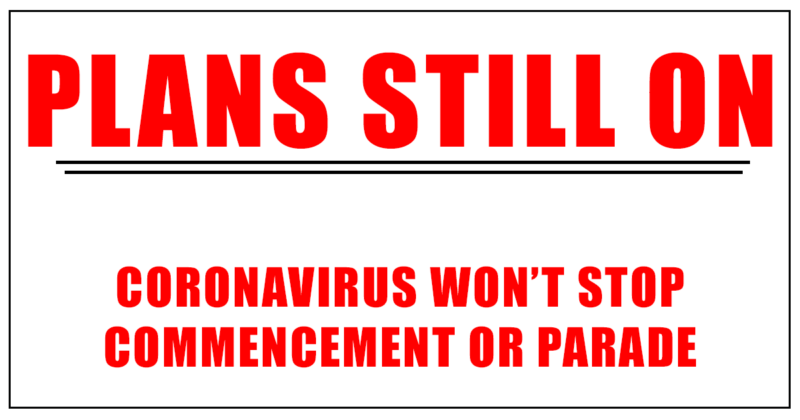 The shutdown of the state continues to unfold amid COVID-19, but two important events—the graduation ceremony for the Class of 2020 as well as a parade for the Swainsboro High School basketball state champions—will go on at some point.

During a press conference on Wednesday, April 1, Governor Brian Kemp signed an executive order closing all schools across the state for the remainder of the 2019-2020 school term. Shortly afterward, Emanuel County Schools announced on Facebook and on the district website that proms for both Swainsboro High and Emanuel County Institute were cancelled for this year. This news left students and community members alike wondering if the graduation ceremony would be cancelled, too. The public can rest assured, however, that will not be the case.

Superintendent Dr. Kevin A. Judy stated to The Blade in an email on Friday morning that information is limited right now, but Emanuel County Schools will hold formal graduation ceremonies “at some point after May 22 when medical, local, state and federal leaders allow groups to start gathering.” The Blade will provide details accordingly as information about those plans develop.

Another concern of the community is whether or not the state champions will have a parade, given the Tigers picked up the title victory March 5 and there has yet to be a formal announcement regarding the plans to celebrate the team’s season for the books culminated by a historic state championship win. Dr. Judy and Dr. Denise Warnock, principal of Swainsboro High School, say a parade will happen at some point as well.

As of mid-March, the city and school system were working together to plan one single event for the team. In theory, this single event would include a parade, the presentation of signage, and the bestowal of an award by the City of Swainsboro. Logistically speaking, such a plan would take time even in ideal circumstances. For example, ordering the signage and receiving it could take weeks. Also, because the parade would take place on a major highway, the planning committee would need to coordinate with the Department of Transportation to ensure the temporary closure of the highway works for their schedule. COVID-19, however, has prolonged the planning.

Nonetheless, Lynn Brinson of the Downtown Development Authority has been on the frontlines of planning the event since the beginning, and she said on the record via phone call on Monday that the plans have not been abandoned. The DDA is still actively working with school officials to construct a plan so that when the coronavirus restrictions are lifted, the team’s achievement can be celebrated as soon as possible.

In the meantime, The Forest-Blade has been working on a commemorative magazine and DVD for the team. Details about the parade and those two products will be made public in the coming weeks as pertinent information becomes available.