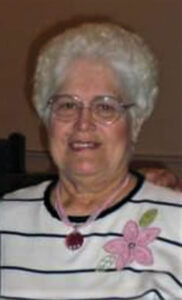 Funeral services for Peggy Warnock, 77, were held Tuesday, March 17, 2020 inside Townsend Funeral Home’s chapel at 2 p.m. Visitation was held one hour prior to service. Burial followed at Eastbrook Cemetery in Swainsboro at 4 p.m. Ministers were Warnock’s husband, Earl; her brother, Brian Patrick; and Jimmy Allen. The family met at the family home, located at 1010 Old Savannah Road. She passed away March 14, 2020.

Mrs. Peggy Warnock was born on January 11, 1943 to the late Lester and Katherine Faircloth Woods in Metter, Candler County. She attended school in Metter and graduated from Swainsboro High School in 1962. She was an avid basketball player. She loved sports.

She was a member of Southside Baptist Church for 47 years and taught Sunday school for some 46 years. She sang in the choir and was very active in the work of the church.

Mrs. Warnock had a great love for people and especially enjoyed working with the youth and the senior citizens.

She worked for Swainsboro Nursing Home for 25 years as activities director and social worker. She was also a social worker for the State of Georgia in 1997 and vice president of Social Workers in Georgia. She enjoyed being president of Emanuel County Heart Association and worked with them for several years.

In 2018, she and her husband joined Calvary Grace Baptist Church in Ailey.

Mrs. Warnock was preceded in death by her parents; son, Wayne Gillis; two brothers, Bobby and Earl Woods; and one grandson, Mitchell Gillis.

This is a courtesy announcement from Chapman Funeral Home of Swainsboro.