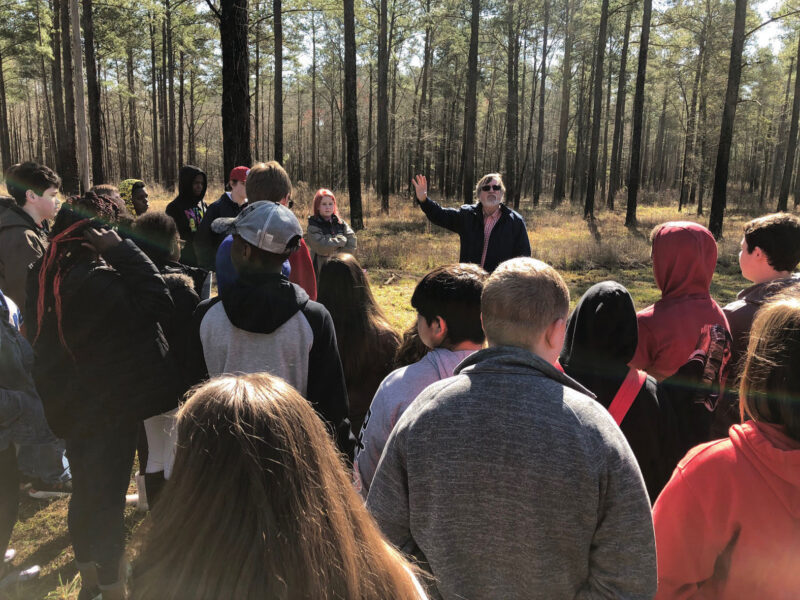 On Friday morning at approximately 9:15 a.m., 200 students from Screven County eighth grade arrived at the Brier Creek Main Battlefield to be a part of a historic education event. The group was divided into four groups for a round-robin education of revolutionary times.

Station No. 1 was an introduction into the Battle at Brier Creek and what happened on the site 241 years ago. Dr. John Derden led this group.

Station No. 2 was a “traveling trunk,” presented by Don and Pat Thomas about items used by soldiers and family members during those days.

Station No. 3 was an encampment with black iron cookware and different weapons of the era presented by Compatriots Allen Mincey, Ruskin Powell, and Tommy Christopher.

Station No. 4 was a four-table display of different animal skins, weapons, and hats hand-made by Compatriot Steve Burke. All of these items were made from roadkill. Burke was assisted by Compatriot Alton Reynolds and Don Bazemore.

Each station lasted about 15 minutes, and the signal to move to the next station was the firing of a 50-caliber flintlock rifle by Compatriot Wilder Smith Jr.

After all students had made it through all stations, a group of Brier Creek Militia fired 50-caliber flintlock rifles while the Brier Creek Artillery fired a 6-pounder naval cannon in a demonstration with two volleys.

At 1 p.m., 35 students and adults arrived from the Community Christian School in Sylvania to attend the event. They went through the same four stations and watched as the 3-round volley from flintlocks and cannon were fired. In 2021, this event will be held Friday, March 5.