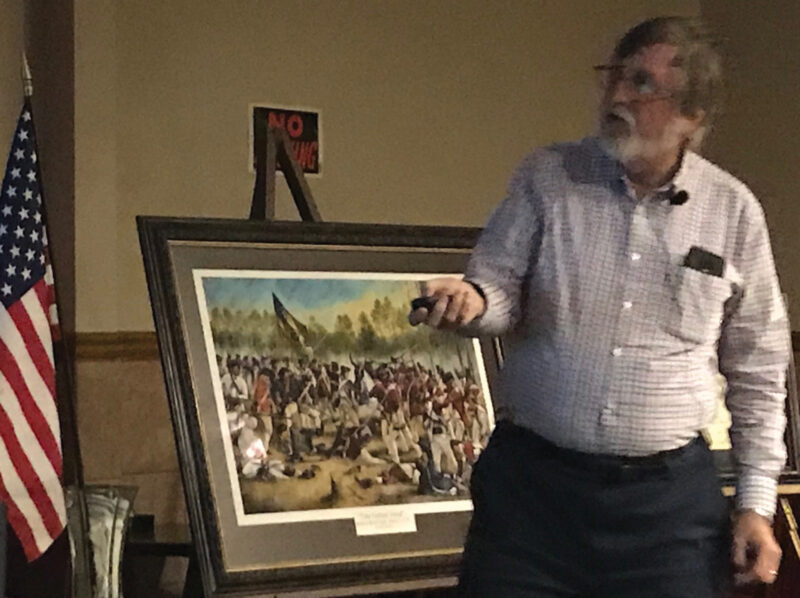 The Wiregrass Chapter of the Georgia Society – Sons of the American Revolution held its monthly meeting Thursday, March 12, at 6:30 p.m. at New China Restaurant.

Derden’s presentation was part-lecture, part-PowerPoint presentation. The timeline he presented started after the Battle at Kettle Creek in Wilkes County that happened a little more than two weeks earlier with a victory for the Patriots over the British and their Loyalists.

The actual battle lasted for only about 30 minutes, and the result of the battle was a British victory.

The British plan was for Major MacPherson, later Lt. Col. Prevost, to occupy the south bank of the Brier Creek. As a diversion, Lt. Col. Prevost would then take a 900-man force and make a 50-mile-wide circle movement towards the west, crossing the Brier Creek at Paris Mill crossing, then moving south and attacking the American forces rear, trapping the Patriots on the triangle of land where the creek and the river met. A decoy force would demonstrate at the destroyed bridge site to distract the Patriots.

After the battle was won by the British, it was reported that Bloody Baird’s infantry and Baird himself, bayoneted many of Col. Samuel Elbert’s Georgia Continentals who had surrendered.

To become a member of the Wiregrass Chapter, contact Registrar Dess Smith III at 478-299-1039 or e-mail him at saussure@bellsouth.net.