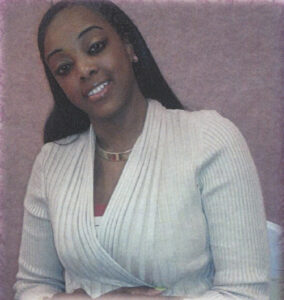 Funeral services for Tarsha Renea Jenkins Hanfield, 38, were held Saturday, February 8, 2020 at 2:30 p.m. at Apostolic Faith Church in Midville with Rev. Beverly Henry presiding and Rev. Amos Handsom serving as the eulogist. Interment took place at the church’s cemetery. She passed away Janaury 31, 2020.

Tarsha Renea Jenkins Hanfield was born September 4, 1981 in Augusta to the late Willie M. Jenkins and Rose Mary Clark. She was the third of five children, and she was the most outgoing, adventurous, full-of-life person. With her outgoing personality, she had many friends; she met no stranger. To know her was to love her. She was preceded in death by two brothers, Roger Smith and Dallas Clark, and two sisters, April (Eugene) Kirkland and Monica (Bob) Lanier, all of Twin City.

Survivors include her beloved husband, Leo Hanfield of Macon; two daughters, La’Naya Phillips of Atlanta and Carneesia Jenkins of Macon; one son, Antoine Dishmond of Macon; 10 aunts; eight uncles; many cousins; six nieces and three nephews, all of whom she loved so dearly that she had unique nicknames she made up for each of them.