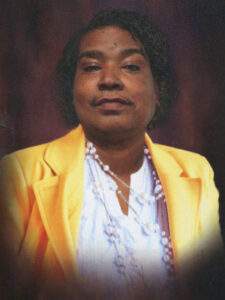 Ruby Jewel Brodus was born May 10, 1961 in Jenkins County to the late Jule Bady and the late Trudie Branch. She attended school in Emanuel County and later moved to Dayton, Ohio, where she met her husband, Bruce Brodus. She later returned home and spend most of her time residing in Emanuel and Jenkins counties. At a very early age, she became a member of Mount Zion AME Church in Garfield. She worked at Twin City Manufacturing Company in Twin City as a seamstress for many years, and she was preceded in death by her parents.

Pallbearers were her nephews, and her nieces were the flower attendants.