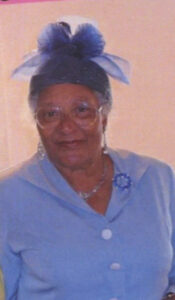 Mary Ella Collins Howard was born October 28, 1932 in Midville to William H. Collins and Eva Mae Mandle. She loved God at an early age, and she joined Saint Paul AME Church in Midville. She was the secretary of this church for 45 years until sickness took its toll.

Howard was educated in Midville early on but graduated from Millen High School. She was a retired educator from Burke County School System.

She married Morris Henry Howard Sr., and to this union, eight children were born. Howard was preceded in death by her parents; her husband; three children, Andrea Howard, Marvis Ann, and James Edward Howard; as well as one grandson, Darius Ray Harden.

She was beloved by many and became affectionately known as “Mama.” She set standards in the way she dressed and was admired for wearing high heels until 83 of her 87 years.